Bridge Jump Survivor: He Looked Down and Regretted His Decision Instantly

Stephen Bouchard knew, the moment his feet didn’t have ground to land on after he made that bunny hop over the railing, that he had made a terrible mistake.

It was around 6:25 pm on September 27, 1987, when then 30-year-old Bouchard, drove drunk to the midspan of the Coronado Bridge, parked his Ford Ranger, bolted from the truck to the rail and did a quick hop over, after a quick peek to see if there were any boats in the way of his landing below. Stephen told me that the moment he realized his feet had nothing to land on he knew he had made the worst decision of his life. As he was falling feet first, he tells me he knew hitting the water, 240 feet below at 70 mph would jam his legs up into his torso so he began flailing his arms back to change his position. When he did hit the water, it was butt first and then his side.

He went under and then bobbed up and began waving his arms. Onlookers from the bridge were yelling over as he remembers to “hang in there” as several boats passed by in the water without stopping. He said the fall itself seemed like life in slow motion as he screamed until he hit the water. The blue painted portion of the bridge especially seemed to take forever to pass by. He doesn’t remember the impact. 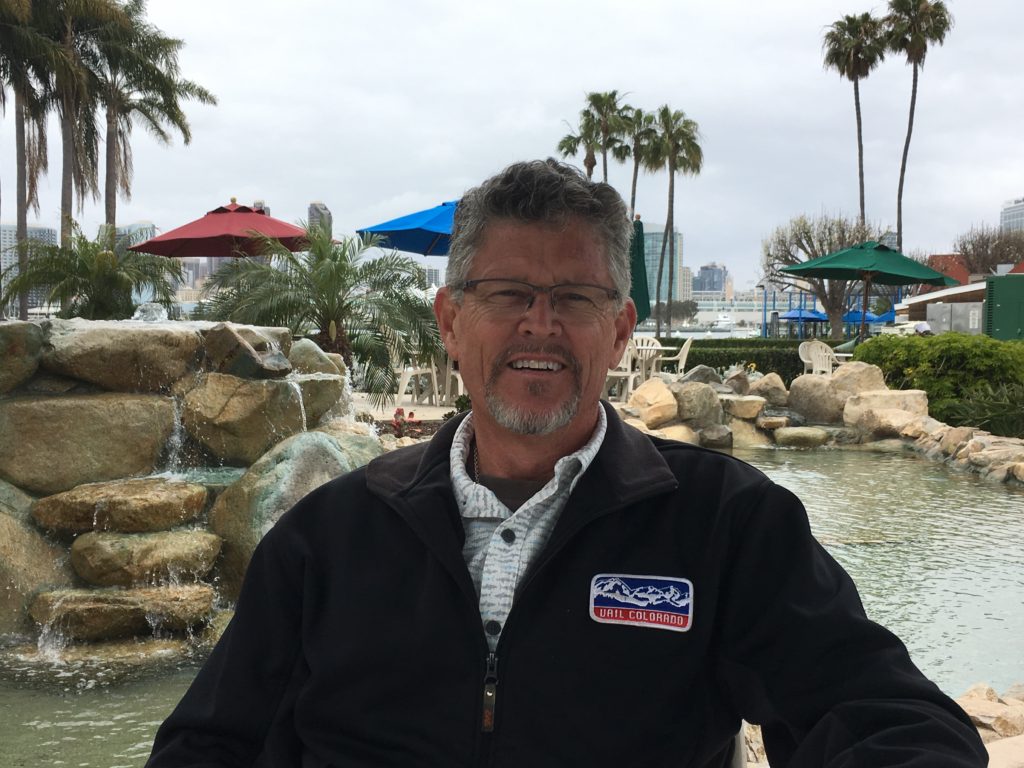 I asked Bouchard what drove him to his decision. He had a family with small children and had found himself unemployed in the construction industry, leading ultimately to depression and alcohol abuse. He said he doesn’t think he would have done it had he been sober. It’s been just over 30 years since he survived his jump, with minimal injuries all things considered. He showed me photos of some serious bruises and shared that he had compression fractions in his T10 and 11 discs, 8 broken ribs, a collapsed lung, bruised heart, and kidneys. He was released from the hospital just 10 days later. He also shared an article that was originally published in the San Diego Union-Tribune on September 28, 1987. 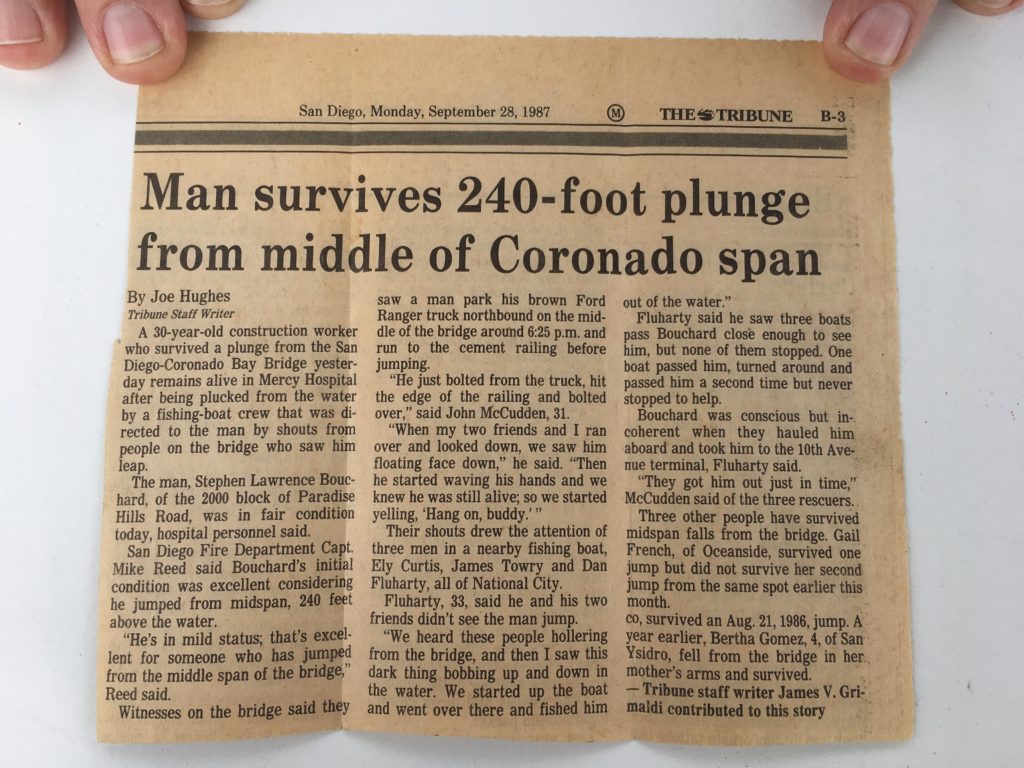 As with many people who suffer from depression, his wife had no idea that he was mentally in a place where he was capable of ending it all, until she received the call from Mercy Hospital. Upon his release, life went on as it had prior. He tells me he continued drinking and eventually divorced. It wasn’t until about five years ago when he was to become a grandfather that he wanted to make a change to be part of his grandchildren’s lives. He now can’t imagine living with alcohol being the center of his existence.

Stephen spoke first with his adult children when he decided to speak out about his life. They were in full support if sharing his story could potentially save someone’s life. On May 20, 2018, he will walk for the fifth year in the Navy’s Bay Bridge Run Walk event to raise awareness. He believes that the small blue signs located on the bridge are so small and sparse, they don’t really serve as a deterrent. He feels that the push for barriers is important. If even a moment’s delay could permit time for reconsideration, a different outcome could be possible for those who drive to the top in despair. To date, fewer than 1% of the people who have gone over have survived. He spoke to me of Bertha Loaiza, who I interviewed recently. He said the difference between her and him, both survivors, is that he made the decision to go over, she did not.

He hopes that in becoming involved with Rhonda Haiston and Facebook group Coronado San Diego Bridge Collaborative For Suicide Prevention his story will be heard and perhaps save a life. The advice he offers is that things may look and seem bleak but they will get better. Don’t give up.

If you or someone you know is suffering from depression, do not delay in seeking help. There are people who care, who have been there and will listen, guide and support you.

Mike Tepper was ready for his grand opening of The Gallery & Hemp Life when the world came to a halt. The opening of...
Read more