Spring It On – Fashion at The Ferry Landing

Sunday was a day of fun from one end of Coronado to the other. While many were admiring the cars at MotorCars on MainStreet, an annual event showcasing over 350 restored pre-1973 classics, hotrods, custom cars and trucks, at the other end of the island at the Coronado Ferry Landing, spring fashion was being showcased. In addition to local fashions, some of the models also sported hairstyles and spray tans from Salon de Ville and Coronado Glow.

This 3rd Annual Fashion Event, Spring It On, featured clothing from local boutiques and the Shops at The Del, including the following business sponsors: 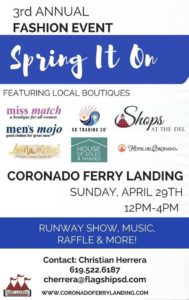 The models who presented the spring and summer fashions to the crowd included many Coronado children and Mayor Richard Bailey. Mayor Bailey sprinted over from the car show to strut his stuff down the runway all in good fun and in support of our local businesses and economy. In addition to the fashions from Miss Match and Men’s Mojo (both of these stores offer a local resident discount on every regular priced purchase; be sure to mention you are a resident), clothing was also represented from H.D. Kids & Co. for the little ones and Brady’s for men and Set Sail for him from the Shops at the Del.

The crowd enjoyed great jazz music provided by LT of Mojito Jazz Radio along with a host of raffle prizes which led to cheers from the crowd as numbers were called. I won a gift certificate from Coronado Glow 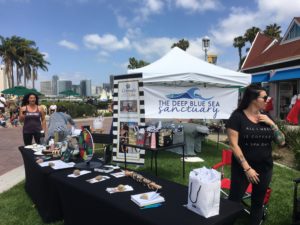 for a spray tan along with a swag bag full of goodies. My daughter won a cute beach picture from San Diego Trading Company. Lisa S. won not one, but two raffled gift certificates for Miss Match and was thrilled because she said, “Miss Match is my favorite store and I am a loyal customer.” I live across the street from Lisa and she is always a picture of up to the minute style. Now I know where she shops. The business owners had a good time mingling and sharing their wares with the crowd. Wes, owner of Island Aesthetics, offered information on her skin care services and had essential oil aromatherapy bracelets on display. 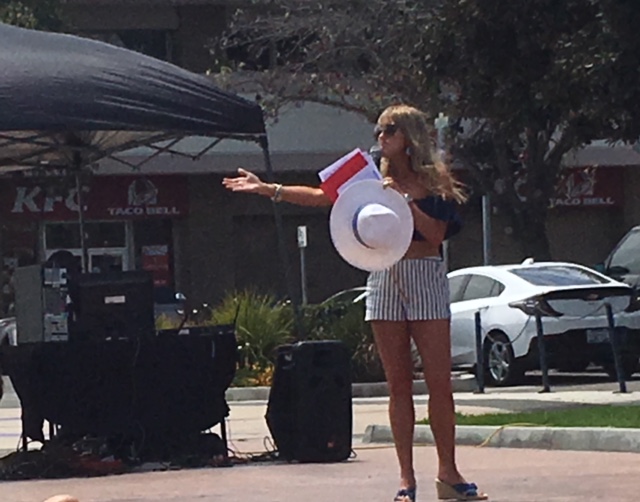 Tania Luviano, Founder & Editor-in-Chief of Latina.Mom organized “The Mayor and Kids, Coronado Style by The Shops at the Hotel Del” portion of the fashion show. Her outfit, tan and hair for the event were provided by the vendors who shared their services including her fabulous hair by Jonathon Hernandez by Salon De Ville.