Books, Books, Everywhere, for a Great Cause – Friends of the Library Book Fair 2018

When I heard that 20,000 books were going to be under one roof, as a bibliophile, I could hardly wait to see all those tomes at the Friends of the Library annual book fair last weekend. I even joined the Friends of the Library, so I could get in on the early Friday shopping afternoon, plus it’s for a good cause. I invited my friend Joyce to come along for early admission, and I’ll admit that at first we were overwhelmed by the sheer volume on the book covered tables. We quickly devised a plan to loop around the whole area to see all the available categories and then return to the ones that piqued our interest.

Outside the tent was an entire section devoted to audiobooks, music CDs, and movies in DVD and VHS format. All for just $1.00 each. I don’t usually purchase audiobooks because I don’t spend a lot of time in the car, preferring to get places via bicycle whenever possible, but the price temptation was too great and I succumbed to buying several and may end up gifting them to friends. I told myself, it’s benefitting the library.

I discovered tapes to learn Spanish for only $1.00 as well as Spanish/English dictionaries. Learning Dutch was also a boxed set option that I saw, but I could not persuade my friend that she needed it.

As we wandered through the biographies, I pointed out several interesting favorites like Ray and Joan that I wasn’t sure if my friend had read. She had, but the lady next to her scooped it up on my recommendation.

We left after more than an hour of looking with a giant bag of books between us. So big in fact that my jumbo bike basket was overflowing.  Note to self: consider driving the car next year to have room for even more.

I knew that I was returning the next day with another friend with an affinity for books, Carolyn, who cheerfully agreed to volunteer to work as a sorter/helper at the event with me. We were in charge of combing through the books to make sure that Christmas didn’t end of up in the children’s section and fiction didn’t end up in self-help or religion.

We scoured the children’s section to find books for her grandchildren, and with her experience as a teacher and my memory of what my kids like, she scored a sack full of adventures from The Hardy Boys, yoyo tricks, Daniel Boone, coloring books, and great sports-themed children’s books by Matt Christopher.

When a lady hesitantly asked if there were any art books, I took her right to the substantial fine art section. I later saw her leave with a large stack of books. Another gentleman wondered if there were any military books, he was delighted when we took him to the extensive section to peruse.

We heard people exclaiming happily when they had found the cookbook of their dreams, still others were looking for Grisham books, which were readily available. When we wandered over to the paperback section, there was quite a crowd vying for the four for a $1 books. There were boxes of Louis L’ Amour books, romance novels, classics and an assortment of just about everything else.

The hobby section included some interesting selections from knitting, creating Christmas origami figurines, and crocheting Barbie dresses.  When a man asked if we had any travel books on Italy, I took him straight to the travel section and we only found a book from 1998 and we both thought that things might have changed quite a bit since them. It made me think that everyone needs to check their home libraries and donate more updated travel books for people to use rather than letting them sit and collect dust on a bookcase.

There was a section dedicated to Book Club selections and we found several books that we had read electronically, but wanted to buy in hardback or paperback to pass on to friends to read. When Carolyn and I finished our shift, we left with a bulging bag and handfuls of books that once again had to be squeezed into my bike basket. Fortunately, we only had several blocks to go.

On Sunday, the final day I was pulled back to the book fair to take a few pictures, but left without any more books. I found out that local teachers were allowed to come and take two bags of free books for their classrooms. Later that day, during a party at my house, when guests saw my stacks of books, I told them about the amazing book fair. I soon discovered people sneaking out of the party to head down to the book fair and everyone returned with many treasures. 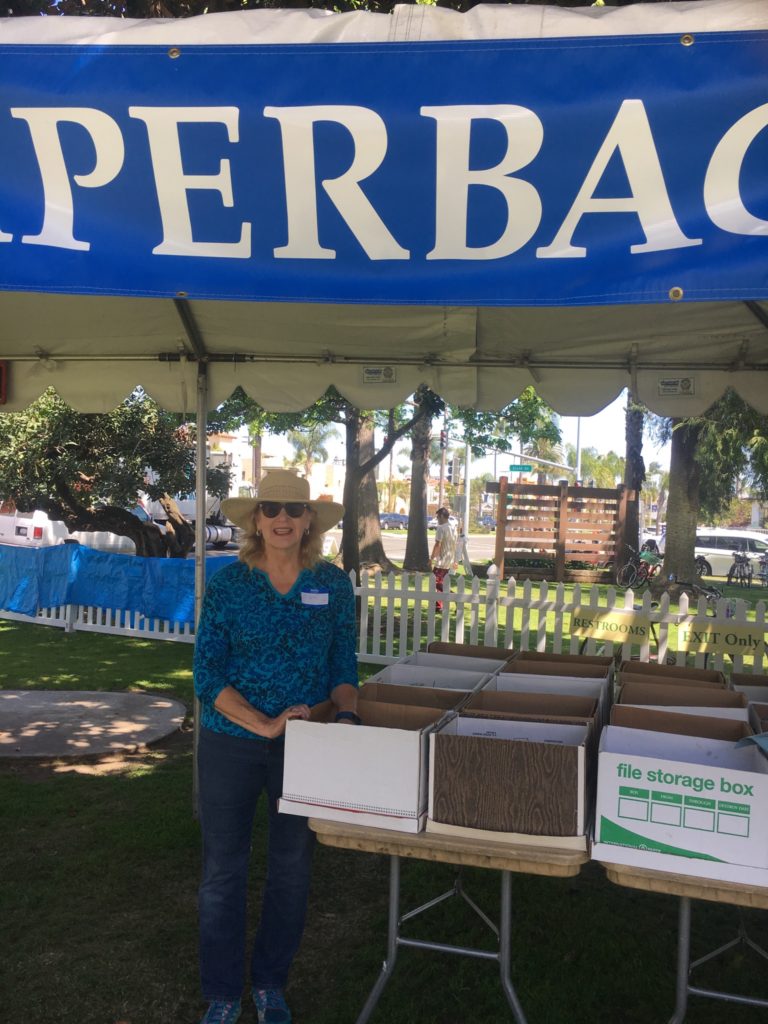 Marsi Steirer, President, Friends of the Coronado Library and event co-chair reports that the final numbers are still being tallied but they are estimating profits of between $25,000 and $30,000. A new statistic the volunteers tracked this year was the number of shoppers, which this year was 3200. Among the 250 volunteers needed to make this event a success, one standout is Barbara Anderson, who has been a book fair volunteer since it started in 1970. Steirer calls her the “designated historian.” And another anonymous volunteer has been dropping off treats and cookies for at least five years for the book fair volunteers to enjoy.

Wondering what happens to the leftover books, I was pleased to discover that the leftover books are donated to any local organizations who need them, as well as to the San Diego Book Project, which distributes books to non-profit organization and schools, the Wildflower Initiative, which donates books to homeless shelters and those in need, and the Midway Museum, which can use the military Naval books. The shipping containers have all been emptied and it’s time to start another year of collecting books.