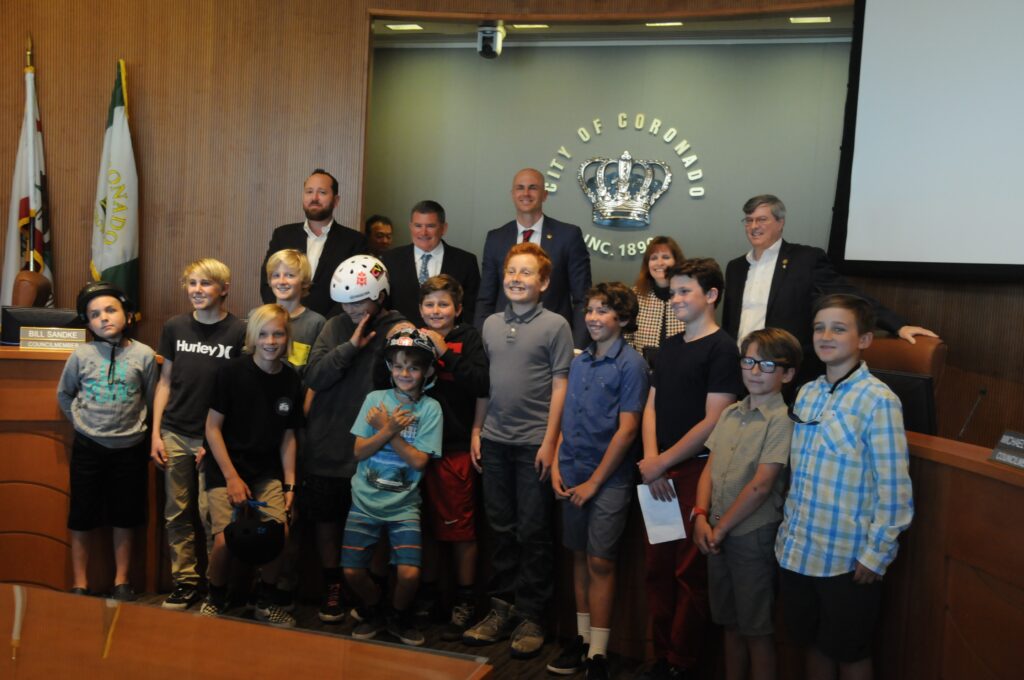 Scooters – You are never too young to impact a city as evidenced by these 12 middle schoolers who made an impassioned plea to the City of Coronado to allow scooters at the city’s skatepark. Some even wore helmets to the April 3rd City Council meeting as they shared their research and findings to support that scooter and skateboard riders can co-exist in the same park. Several of the kids said that they are willing to teach the younger generation the etiquette of sharing the park. The students collected more than 100 signatures in support of their petition and cheered when the City Council granted their request.

Roger Miller, Director of Recreation and Golf Services, said that his department reviewed 35 skate parks in other cities to see their practices. The estimated cost to retrofit the park is $29,500, with an additional $3,000 to $5,000 for annual maintenance. Councilman Donovan jokingly suggested that they add a clause making kids’ show proof of having finished their homework before they can ride at the park.

This request goes for a second reading at the April 17 meeting. It will then be put in the 2018/19 budget and monies will be available in July. Modifications at the 16,000 square foot park will take several weeks and should be ready by the end of July.

Drones – City Manager Blair King brought forth an ordinance which would set rules in place for recreational Unmanned Aircraft Systems (UAS), commonly referred to as drones. The Navy doesn’t have resources to manage all recreational drone activity, so this would allow the city to help enforce drone activity. He pointed out that this was first time that drones were being discussed at the City Council level.

Due to their popularity, he felt it was time to address this issue. He has been working with the Navy to provide predesignated locations for drones. The Federal Aviation Authority (FAA) has public ordinances, but Coronado has no local laws. This prevents the city from enforcing any local provisions or complaints. Together with Police Chief Jon Froomin and City Attorney Johanna Canlas, they have been discussing this for the past two years and have drafted an ordinance to promote safety and enforcement. Since his tenure, his office has had three drone complaints and the Police Department has received 12 complaints.

Primary issues surrounding recreational drone use involve privacy and interference with Navy operations. The proposed ordinance designates pre-approved areas that meet with Navy approval. The new ordinance would apply to UAS 55 pounds or less. It would limit flying capability to flying no higher than 400 feet above the earth’s surface. It states that drones cannot harass, stalk, disturb or threaten or fly closer than 20 feet to others. It also stipulates that flight plans must submitted electronically online within four hours. This would provide for two-way communication and would allow the city to have enforcement capabilities.

The proposed designated areas are the Coronado High School track, Coronado Middle School, Cays Park and Tidelands Park. Drone users would have to stay within the confines of these predefined areas. The areas have been approved by the Navy, but concerns have been raised that it will conflict with dog and athletic activities. The council asked King to review the ordinance with entities from the schools and parks for feedback. They also asked that lowering the height limit be considered. The ordinance would make violation a misdemeanor which is punishable by up to six months in jail, a $1000 fine and drone confiscation.

Commercial drones are considered a separate issue. Real estate agents typically use drones to video house exteriors, but these should be licensed professionals under the purview of the FAA. 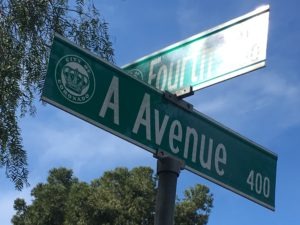 Third & Fourth Streets – City Manager Blair King presented an update on the implementation of the 2015 Fehrs and Peers report that looked at a variety of improvement solutions to aid in safety on the 3rd and 4th street corridors. He said that his office has made progress with some of the recommendations and others are not possible due to limited time and resources.  Some will also not be accepted by Caltrans, short of relinquishment. The city is currently waiting for a draft relinquishment report from Caltrans which is expected in July. King pointed out that projects moving forward include: the stop light at Alameda and 4th, bulb-outs, pavement markings and elevated crosswalks in crucial areas.

As an example of the problem, Councilman Bill Sandke pointed out that the homeowners at 4th Street and A Avenue have had their fence taken out by car accidents three times in the last 18 months. He suggested getting the GPS companies to more accurately reflect safer routes of travel in Coronado.

When this came to the City Council previously, it was determined that in order to restrict the left turn movements on 3rd Street, a public vote was required, but for that to happen an environmental review had to be performed first. It was not approved at that time, due in part to the half million dollar price tag and time frame to complete it. It was pointed out that a citizen’s initiative would not have the same requirements as a public referendum.

Other issues of note include: