“NOW THEREFORE, BE IT RESOLVED, that the Board of Education of the San Diego Unified School District demands action from our State and Federal Representatives to reinstate the assault weapon ban and adopt stricter controls governing the sale, transfer, possession, manufacturing, and distribution of all firearms, dangerous weapons, and ammunition.

BE IT FURTHER RESOLVED, that those stricter controls include not only comprehensive and thorough background checks of all purchases of firearms, including curios and relics; dangerous weapons; and ammunition; and include the purchase of those items facilitated through the internet and at gun shows; but also an outright ban on semi-automatic firearms, high-capacity magazines, armor-piercing ammunition, bump stocks, and any other equipment, alteration, or modification that would increase a firearm’s capacity for ammunition or rate of fire; as well as reasonable waiting periods and mandated training in the safe use of guns.

BE IT FURTHER RESOLVED, that the San Diego Unified School District will transmit copies of this resolution to federal and state elected officials to demand those officials take immediate action to enact meaningful gun control legislation to prevent even one more child from being harmed by gunfire.”

School boards across the country have been passing similar resolutions over the past week. 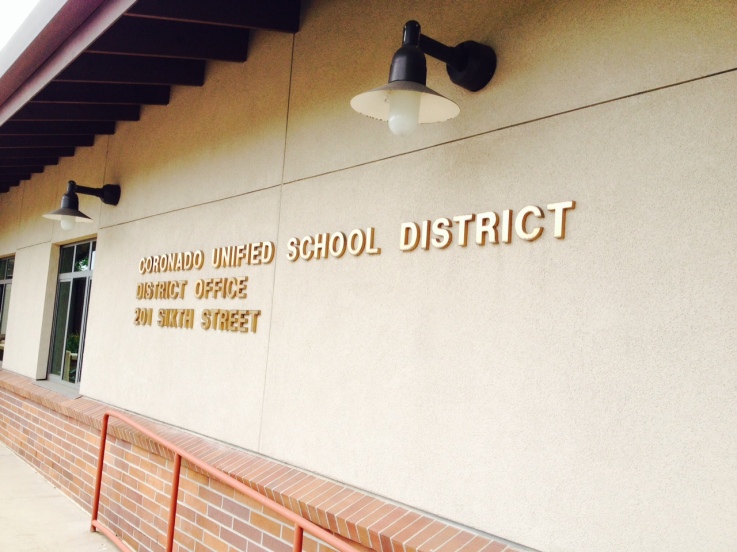 The agenda for the next Coronado Unified School District Board Meeting, to be held March 1, is available. On the agenda are two items of particular interest in the current environment: “Comments from the Audience,” and “Approve Comprehensive Safety Plans for Village and Silver Strand Elementary Schools, Coronado Middle School, and Coronado High School.”

Comments from the Audience is a regular agenda item and could be of note this week as one grass roots organizations, Moms Demand Action, is calling on private citizens to approach their school boards and ask that they adopt a resolution calling on greater gun control from their legislators and that they ask districts to compel parents to sign commitment forms on gun safety in their homes.

Over the weekend, San Diego Unified School District (SDUSD) Board Vice President, Kevin Beiser, indicated his intent to introduce just such a resolution, along with his colleague Richard Barrera, at the SDUSD Board Meeting today. He said that his resolution would demand the renewal of the federal assault weapons ban, enact stricter background checks, ban semi-automatic firearms, high-capacity magazines, armor piercing ammunition and bump stocks.

It is not yet clear if any individuals or organizations in Coronado will be requesting anything similar at CUSD’s meeting this week.

Other topics that might be expected to come up include the concept of arming teachers for security and the nationwide student walkout planned for March 14.

The second item of interest will be the approval of the comprehensive safety plan. If individuals would like to view the plans for any of the schools prior to the meeting, they are currently available (only for viewing) in the Superintendent’s office at the District Building. The version residents see is, according to the district, a version that is edited so as to not make specific security details available.

Discussion on the comprehensive safety plan could be a precursor to further conversation at the March 5 community forum on safety in the schools.

The Coronado Unified School District’s next Board meeting will be held this Thursday, March 1, at 4 pm in the Board Room at 201 6th Street.