I don’t know about you, but I love, love, love watching Fixer Upper on HGTV. There’s something so absolutely serene about the homes that Chip and Joanna Gaines remodel. The spaces, thoughtfully and lovingly designed by Joanna, pull off an interior decorating feat . . . minimalism, functionality, and a touch of whimsy laced with tradition. 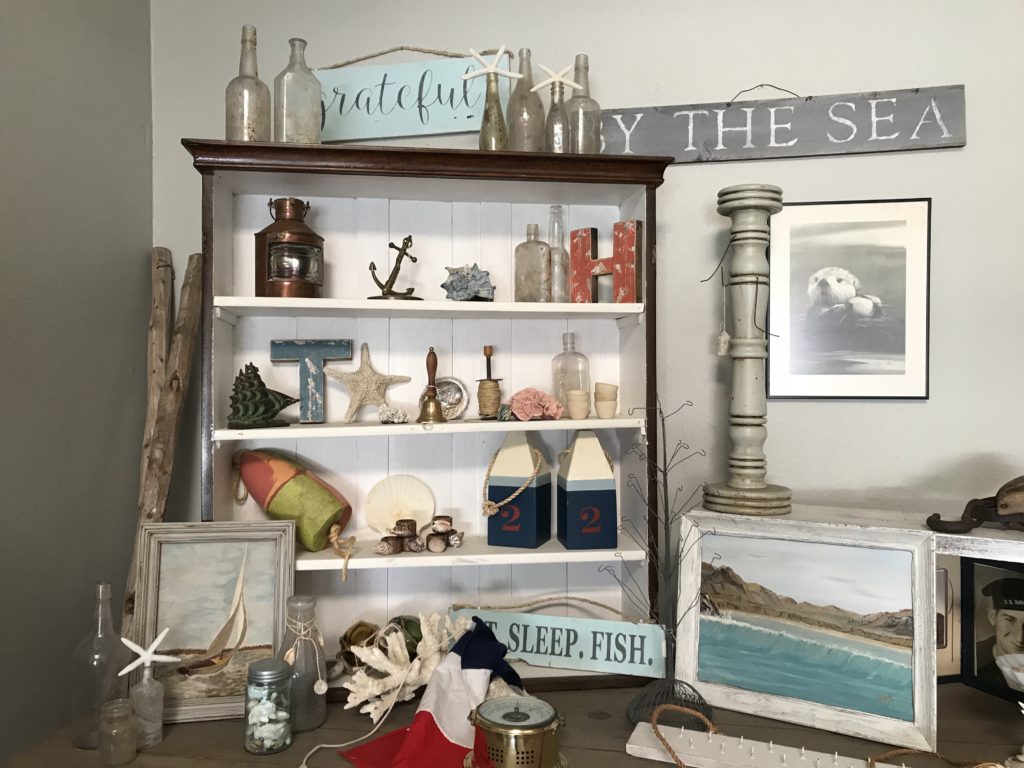 When I first stepped foot into Coronado resident Sandy Jennings’ new store, Coronado Vintage, located at 859 Orange Avenue, I remarked, “I feel like I’m stepping right into Joanna Gaines’ heaven!” The store is a veritable treasure trove, with items small enough to be the finishing touch on a coffee table to refurbished pieces of furniture full of charm and character. With a subtle and understated cottage-beach-nautical vibe, Coronado Vintage is a great place to find the perfect gift or conversation piece of any size! Everything in Coronado Vintage, just like Sandy herself, has a story!

Sandy, a Navy veteran with six years of service, was raised in the desert of California, but has called the Crown City her home for the past thirty-five years. As she was being discharged from her time as a radioman, Sandy found herself in Coronado, and decided she was home! “I thought, ‘Wow! There’s no way I’m ever going back to live in the desert,'” she shares as she laughs, thinking back on that earlier chapter of her life.

Sandy met and married Mark Jennings, who was raised here, and together they are the proud parents of Sam and Dana, twins who are both seventh graders. Long before marrying and starting a family, however, Sandy fell in love with antiques and refurbishing vintage pieces herself.

After getting out of the Navy, Sandy began working at a former restaurant in town called Bula’s. One of her regular customers, an antiques dealer in Coronado named Edith Grimm, asked Sandy to come work with her doing estate sales. Grimm operated Tent City Antiques on 10th Street, and when she retired, she offered the shop to Sandy.

“It was scary,” Sandy reflects on her decision to take over Grimm’s business, “but I found a partner, and together we opened The Attic. About six months later, we were offered a location on Orange Avenue, and grabbed that so we had The Attic on Orange and The Attic on 10th Street.” After owning and operating both locations of The Attic for ten years, Sandy became a mom, and decided to stay home with her newborn twins. “I resold both businesses, and thought I would stay home full time,” she recalls. 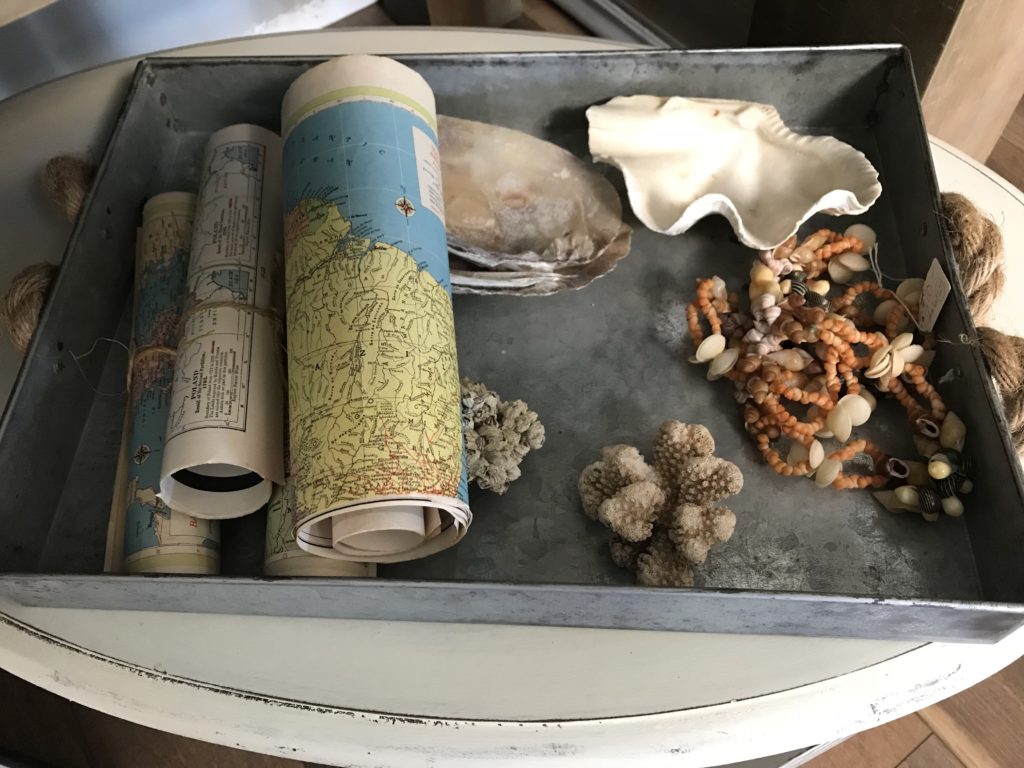 Even as a busy new parent with two bundles of joy, Sandy’s passion for all things vintage never faded. Before she knew it, Sandy found herself renting a space at one of the antique malls in Ocean Beach. Bemused, Sandy admits, “I was back in! You just can’t stop! It’s such a passion, and it’s way too much fun!”

For the last ten years, Sandy continued renting a small space in Ocean Beach, where she could sell the refurbished pieces she’d given new life to as she also continued to enjoy her time at home with her children. The arrangement suited Sandy perfectly until about six months ago, when she learned that the antique mall in which she had been renting space, Newport Avenue Antiques Center, was slated to become a Target. Given notice that she had to move, Sandy knew it was time for to become a business owner in Coronado once again!

“Even before then, probably for the last three years, I’ve been really focusing on finding a space back in Coronado,” Sandy says. “I was putting the word out, hunting for a location, when this space became available. It used to be Gold ‘N Gifts, a jewelry store for twenty-five years. I got very lucky, and I’m extremely grateful,” she adds. 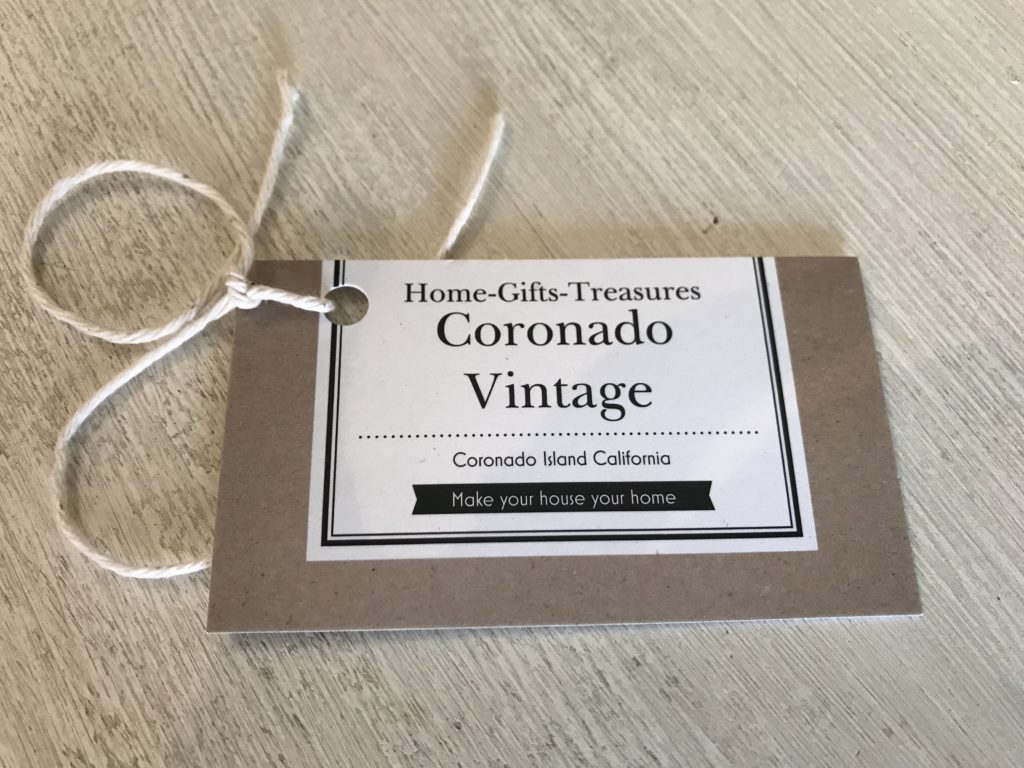 Still in the soft opening phase as she sets up her shop and prices her vast inventory, Sandy is already open for business. One of the first pieces she sold, a unique white bench, was purchased by her next-door business neighbors at Island Barbers. The bench, as welcoming as Sandy’s smile is, has already made itself at home just like Sandy has with her new store.

What can one expect to find when shopping at Coronado Vintage? Along with winsome signs, wreaths, paintings, vintage hats, and one-of-a-kind home decor odds and ends, Sandy will also be selling pieces of furniture she’s painted and refurbished. “I do a lot of shabby-chic,” she says, pointing to a chest of drawers she’s redone, “and I do a lot of framing as well,” she adds. 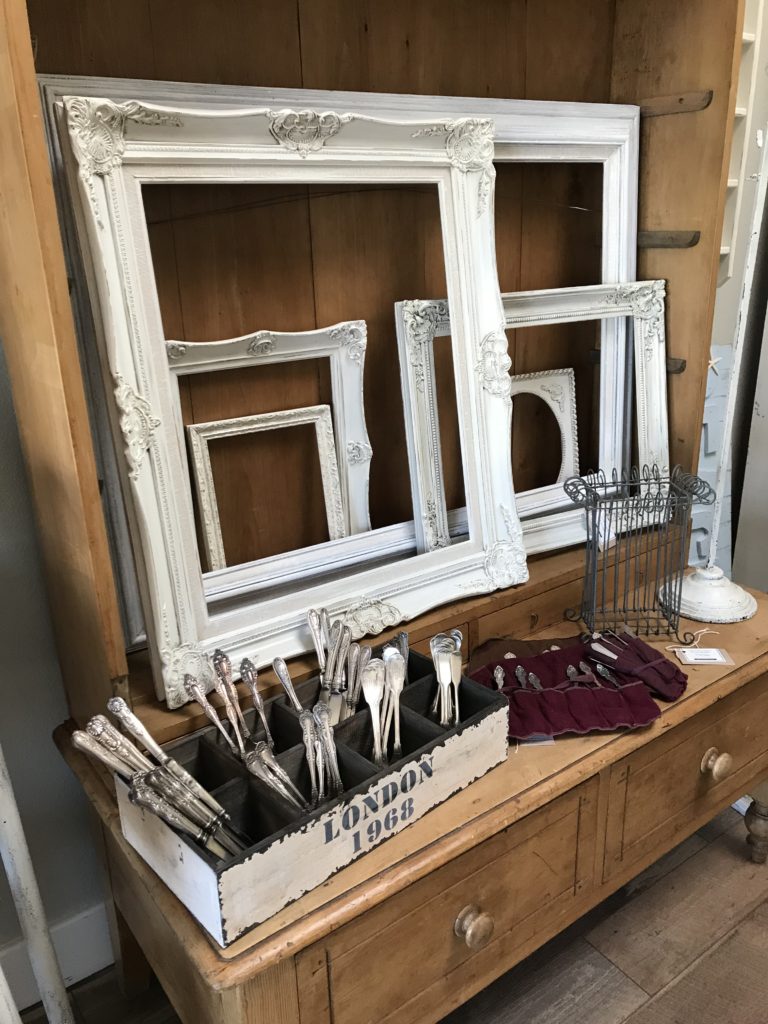 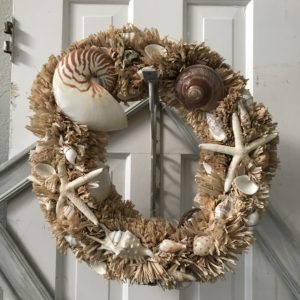 Those who are especially interested in bygone Coronado keepsakes will be drawn to Coronado Vintage, which offers a plethora of relics from the city’s past. Among items for sale are original plates from the Hotel del Coronado as well as silverware, old prints, and more. “My love is Coronado memorabilia, and I’m bringing a lot of that out now because I’ve been collecting it for quite a while,” Sandy explains. So many of the items in her store speak to her, and it’s Sandy’s wish that patrons of her shop will embrace these treasures that still have a lot of life left in them. 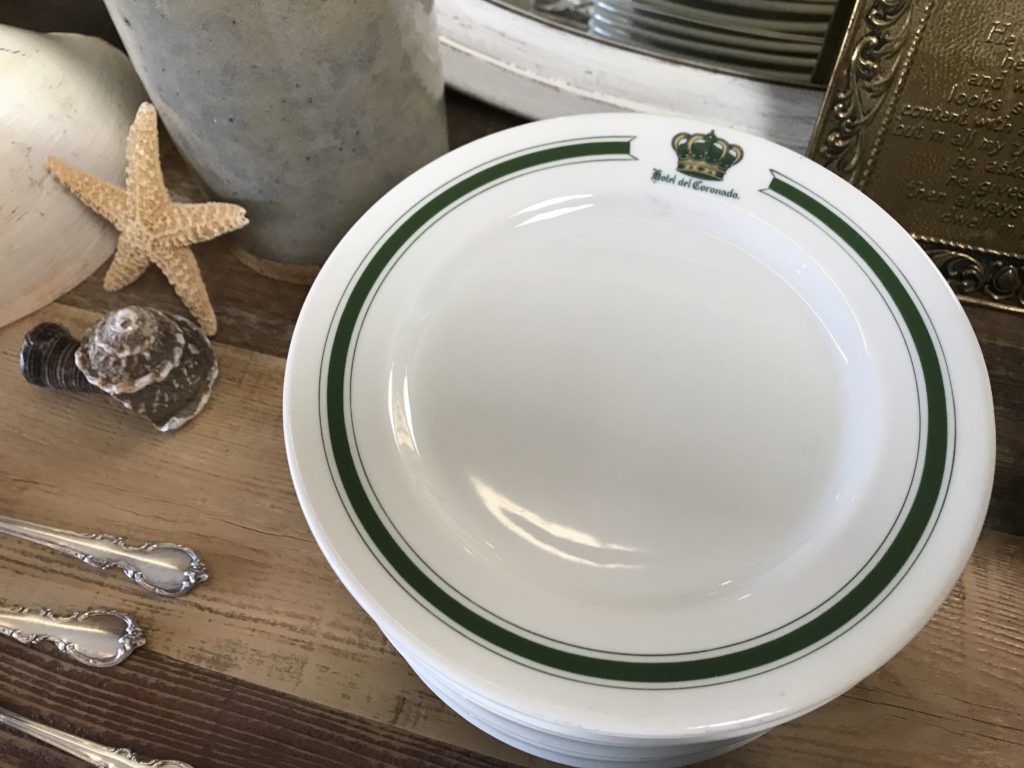 To Sandy, one of the biggest takeaways of her passion for refurbishing furniture is that people build memories around the items she sells. With a hand unwittingly placed on her heart, Sandy says, “I’ve been doing business in Coronado for so long, even continuing to set up a booth at Artisans Alley every year, and I still have people come up to me, who ask, ‘Do you remember that dresser I bought from you years ago? My daughter now has it  at her house . . . ‘ I adore that the items I sell aren’t just things; the pieces become part of a family’s story.” 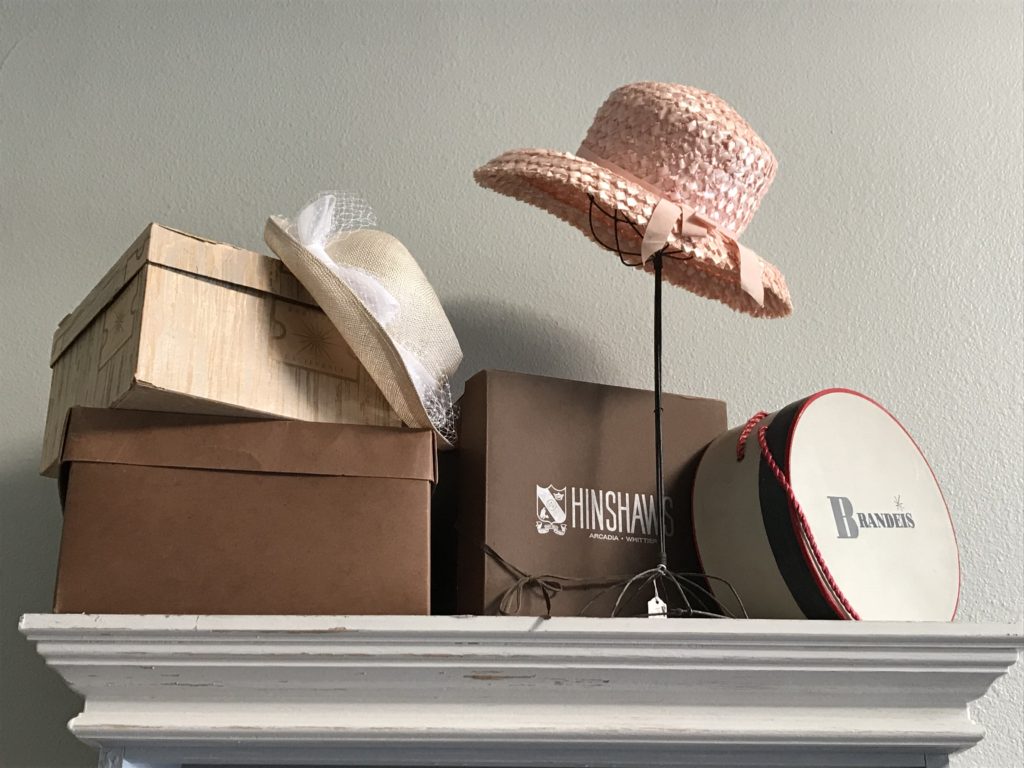 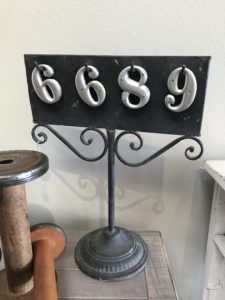 As far as pricing is concerned, Sandy says, “I feel that my prices are really very reasonable. If you buy an item, and then down the road decide to remodel, you can give it away, and still afford to come back and buy something else. It’s not like you’re married to it because it cost thousands of dollars.”

Knowing that many of Coronado’s Navy families eventually may move to wherever the Navy may lead them next, Sandy likes knowing that her shop may be the place in town where they select something special that will forever remind them of the brief time they called our city home.

For those members of the Crown City community who have vintage Coronado items that they’re willing or looking to sell, Sandy is always eager to take a look. On a case by case basis, Sandy is amenable to buying Coronado antiques outright or perhaps negotiating a consignment arrangement. “It depends on what it is, what I have in my inventory at the time, and what I have room for in the store,” Sandy explains. 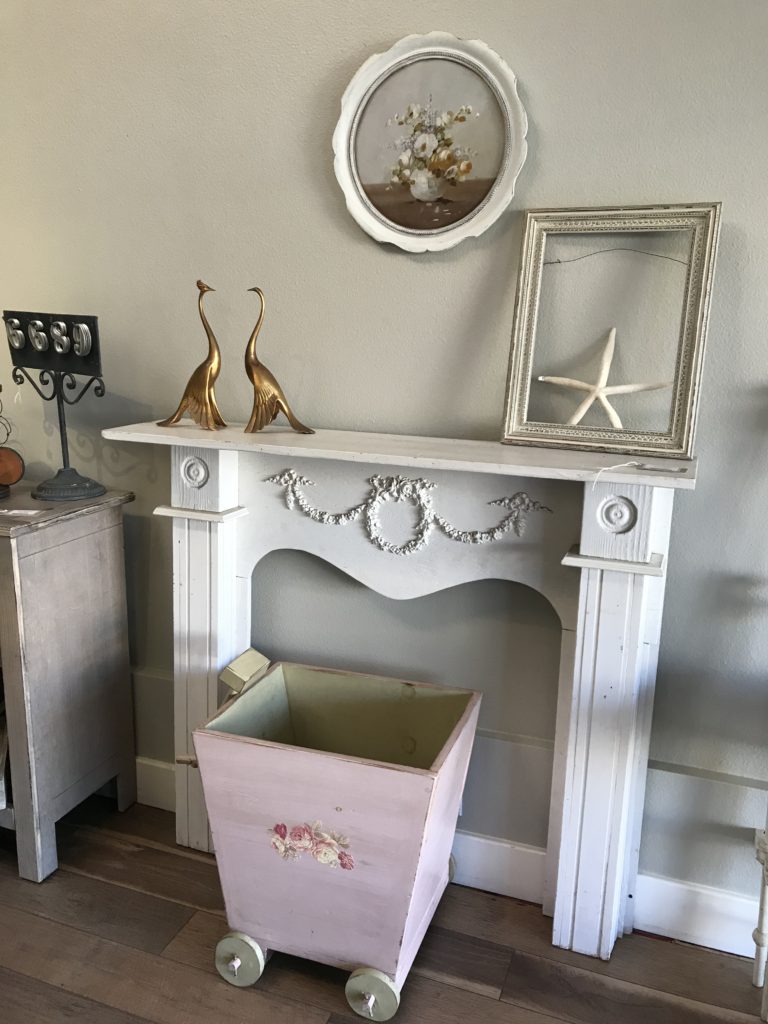 What does it mean to Sandy to be a business owner again in Coronado, working five blocks from her children’s school and being able to continue making her passion a career? As her face lights up, she simply responds, “Everything. It means everything. I have so many friends here. It’s going to be so convenient for my family, and the children are loving it! They’re already bringing their friends by to see ‘Mom’s’ store, and I can tell that they’re really proud. I’m teaching them a solid work ethic too, which is a huge part of this.” Looking around her new store, Sandy gushes, “I can’t even believe this is all happening. It was meant to be.” 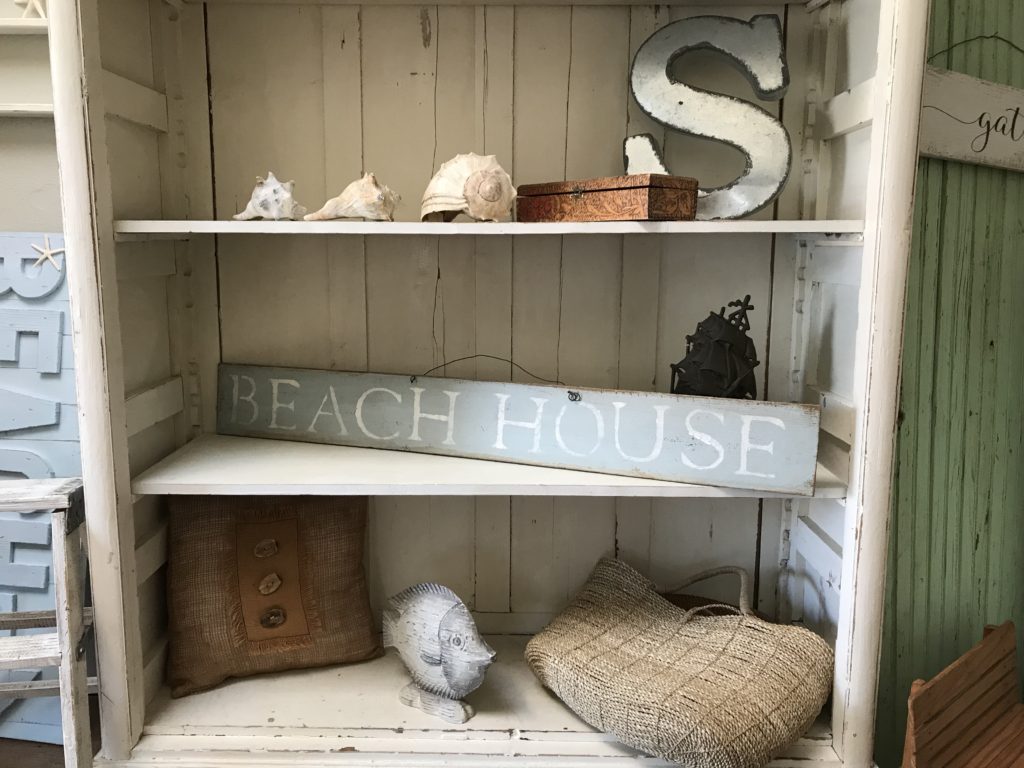 Always hoping that her dream of selling vintage goods would someday come to fruition, Sandy has been an avid collector of Coronado mementos, big and small. Laughing, she shares, “In addition to two filled storage spaces, for years I’ve been stuffing items throughout my house, wherever I could find room, using every inch of storage space.” While she is happy to have the opportunity to connect buyers with the perfect pieces, her family, especially her husband, are elated/relieved to have more space in their house again. She compliments her husband, saying, “He’s always been so supportive.” 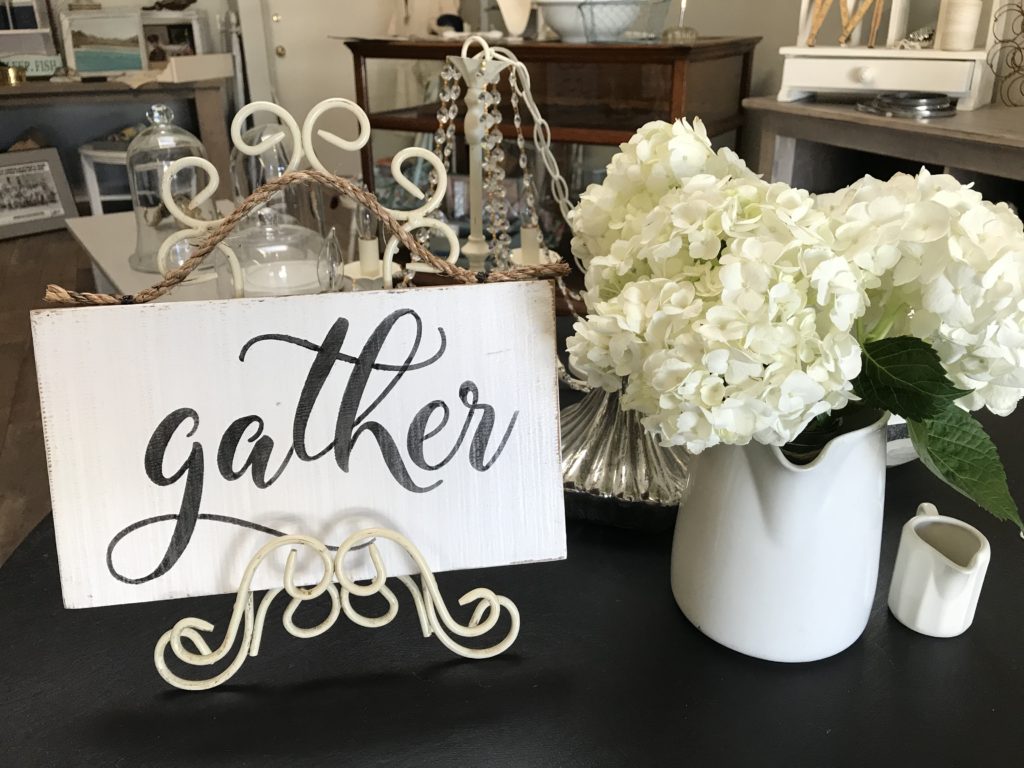 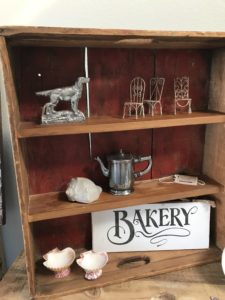 While the store is continuing with its soft opening, there’s still no official date for a grand opening. (Stay tuned for details!) Even though the signage on the awning still reflects the previous store’s name, Coronado Vintage is definitely open for business! (Stay tuned for the new sign!) If you swing by, and notice the store isn’t set up 100% perfectly just yet, Sandy still welcomes you, and encourages you to come by regularly as she anticipates more vintage goods finding their way to her shop on a regular basis. “I’m always searching for new treasures,” she says. 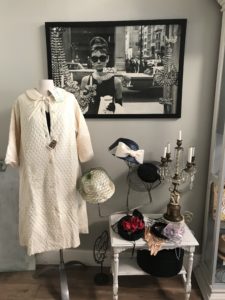 Reflecting on what Coronado Vintage will mean to our community, Sandy concludes, “I want this shop to have something for everyone, items that will appeal to men and women of all ages.” As you support this new, local business, keep in mind that Sandy will offer a 10% discount for locals and military families. There are some parking spaces located behind the store as well as a rear store entrance, and Sandy will offer local delivery of larger items. “I’m excited about the resurgence of this section of Orange Avenue,” Sandy shares, making it apparent that her love of old things being given new life doesn’t just apply to furniture. 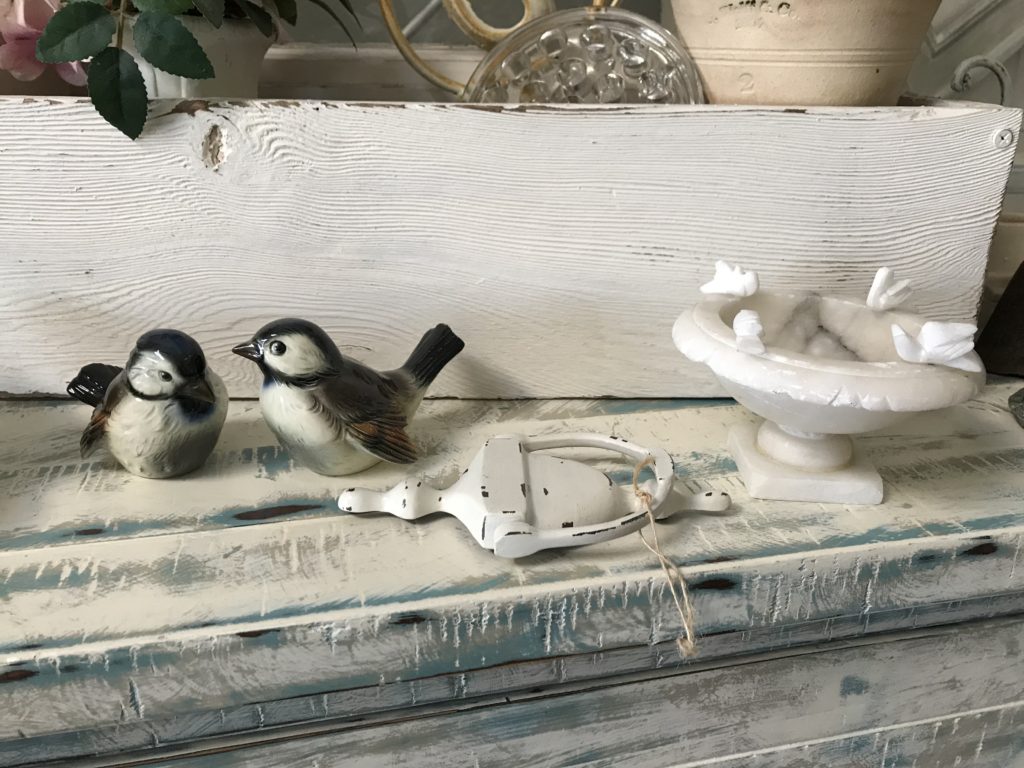