Submitted by Comics + College
Nathan Chisholm and Marlee May 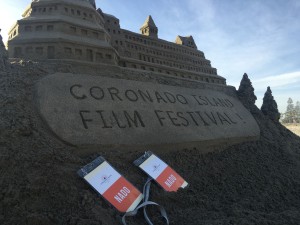 It was a bittersweet day as the inaugural Coronado Island Film Festival wrapped up. With tons going on, it was hard to choose what to partake in. One opportunity we couldn’t pass up was the sneak preview of “Kung Fu Panda 3” from DreamWorks Animation. The movie was set up by Executive Producer and Director of the Coronado Island Film Festival, Andy Friedenberg, and movie critic Leonard Maltin. One of the most exciting parts about the sneak preview was a special video introduction sent to us by the lead voice of the movie, actor Jack Black! With a quick congratulations on our festival and some kind words about our town, he got us in the mood for some laughs. The movie itself was hilarious, and had a classic “Kung Fu Panda” storyline. It was extremely fun for the whole family, and there was a great turnout of kids that were excited to see the Panda named Po embark on his newest quest to master the art of Chi and defeat the evil Spirit Warrior Kai, voiced by J.K. Simmons. “Kung Fu Panda 3” will be released to theatres nationally on January 29th.

After “Kung Fu Panda 3” we hurried over to the CoSA Theatre to catch the Film Festival’s audience favorite shorts in the “Families” category. The line up of the short films included “Billy the Kid”, “Bror (Brother)”, “The Gift”, “Green Thumb”, “I’ve Just Had a Dream”, and “Unspoken”. Each one of these amazing shorts had its own incredible idea to bring to the table. They ranged from comedy to foreign to dramatic and each one was phenomenal, which made it easy to see why these were crowned the Coronado Island favorites. While all of them stood out there were two that truly astonished the audience.

The first was “I’ve Just Had A Dream” by Javi Navarro. This short focused on the power of perspective and how it can drastically change a story depending on which lens it is seen through. This is shown beautifully by depicting one story but having each character describe what is going on via voice over. The result of this creative story telling method is eye opening and forces you to think beyond yourself. We were shocked even more to see it because it did not appear to be in the program, which made it a delightful surprise. The second short that stood above the rest was “Unspoken” by George Zaver. This was incredible because of the minimalistic dialogue. The almost non existent speech within the film really lived up to its title. The fact that it was able to communicate a powerful message simply using subtle body language and creative storytelling is truly a testament to the actors as well as the incredible director. The use of making the audience uncomfortable as one of the main story telling devices was genius. While watching the film you started out kind of uncomfortable and it grew with the story arch to build into an uncomfortable frenzy that synced up perfectly with the climax of the film. This synchronization gave the message of the film an incredible amount of emotional power that really worked in the film’s favor. In summary, all of the shorts in this category were sensational and these two put them above and beyond.

One of the most difficult parts of the weekend was choosing what to attend, and what to miss. Because there were so many movies to see, some overlapping in screening times, and decisions had to be made. We had a tough time deciding between the Meet the Producers Panel, and the feature film “Coming through the Rye.” Ultimately we chose to go to the Producers Panel, and we were so sad to have missed the feature film. Lucky for us, “Coming through the Rye” was the Film Festival’s audience favorite feature film! Because it won this title, the festival screened it again today at the Vintage Village Theatre. We were so thrilled to see it, because we had heard only rave reviews. Those reviews rang true, and we can see why it was the audience favorite. Based loosely on a true story about a boy who believes he is destined to play the role of Holden Caulfield on stage, this movie was heartwarming, exciting and wonderfully enjoyable.

To wrap up the Festival, we attended a screening of the film “45 Years” at the Vintage Village Theatre. It was introduced by Executive Producer and Director of the Coronado Island Film Festival, Andy Friedenberg, and movie critic Leonard Maltin. The movie is about a couple who are about to celebrate their 45th wedding anniversary, and the days leading up to their party. We don’t want to give too much away of the plot line, so really, that is all we should say. The movie stars Charlotte Rampling, who just last Thursday received an Academy Award Nomination for Actress in a Leading Role for her part in this film. It is also worth mentioning that “45 Years” just won multiple awards at the London Critic’s Choice Awards.

One of the most incredible parts of the festival was its attendees. Every person, whether they had been to a film festival before or not, was over the top excited about every event. The social aspects were phenomenal. While waiting in lines to see the different films, people were chatting about what they had seen, what they hadn’t, what they are planning on, what they loved or hated… the list goes on. It was great meeting people in lines that have the same passion for films that we do- something you might not get to talk about on a daily basis. We came to a consensus that this festival ran so smoothly for its first time, and that it was such a great experience, that we all cannot wait for next year’s festival weekend.

Overall, we had a wonderful time at the festival these past four days. Neither of us have ever been to a film festival before, and boy has this set the bar high for any future festivals we attend. Once again, we are ecstatic for next year’s festival on January 13th through the 16th. Somehow we know it will be even bigger and better than this year, which is already hard to top! Thanks to everyone that made it possible, from the entries to the producers/directors, to the board and the volunteers- you all did an amazing job!

Comics + College: A Mellow Yet Exciting Day at the Coronado Island Film Festival