Life should be measured not by the number of years but rather by the love shared, the memories made, the joy given and the blessings received. In that case, Lt.j.g. Kyle Christopher McArthur “KMac” led a full and joyful life, having touched more lives in his brief time on earth than many accomplish in a long lifetime.

Kyle attended Coronado schools from Village Elementary through Coronado High School and graduated in the Islander Class of 2006. He participated in many sports while growing up including Coronado Little League, Coronado youth basketball, lacrosse and Pop Warner Football. While at CHS he was a standout on the Coronado football field. He played JV football his freshman year and joined the varsity team as a sophomore playing through his senior year. He was the first player in school history to be named Captain of the team before the season started. He was loved and respected by coaches and players alike. Football awards included First Team All Central League Offense his senior year and the coveted Heart of the Islander Award. For all four years in the spring he played long-stick defender for the CHS lacrosse team. McArthur was named All City League Defenseman his junior and senior year.

An avid sailor as well, he was named one of the top senior athletes at Coronado High School by the Coronado Rotary Club. He also was a member of the NJROTC program at CHS and aspired to attend the Naval Academy and to one day fly jets. He was simply your All-American boy who loved the beach, surfing, and sailing. He rooted for the Padres, Chargers, Aztecs and the USC Trojans. He valued family, friends and loved his country. He made frequent burrito runs and relished spending time with friends.

Upon graduation from CHS Kyle attended the Naval Academy Preparatory School for one year prior to entering the United States Naval Academy. While at NAPS he focused on his academics and continued to hone his skills as a lax defender. He entered the United States Naval Academy in 2008 as a member of the 13th Company dubbed “The Lucky 13”. Once again he found success in athletics while at the Academy. During his plebe year McArthur was a member of the Navy Sailing Team. He then joined the Navy Club Lacrosse Team as an upperclassman. His years of hard work and his skill set as a defender contributed to Navy winning the title of National Championship Club Team his senior year.

He graduated from the Naval Academy in 2011 with a BS in Systems Engineering and was selected to be among the few to train to be a Naval Aviator. McArthur was stationed at NAS Meridian, Mississippi and was pursuing his dreams. Kyle was exhilarated about his future after he carrier qualified in a T-45 Goshawk on the USS George W. Bush just one week before his passing. 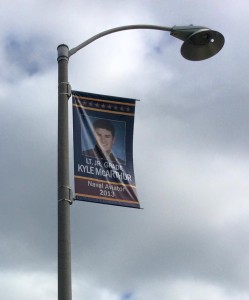 Kyle McArthur continues to make an impact after his death in a tragic automobile accident on June 16, 2013. On October 20, 2014, prior to an Islander football game, a touchstone plaque was installed over the door of the Islander athletic locker room for players to touch on their way to the field. The plaque is inscribed with a quote from McArthur made after a humiliating football playoff loss at Imperial his junior year. It reads, “Hey listen up seniors, it was an honor and a pleasure to play and compete with all you guys and I wish you the best of luck moving forward. Everyone else, remember this feeling because next season starts right now. No team will be more prepared than us. No team will work harder than us. Keep your heads up and use today’s pain to help us prepare for tomorrow’s triumph. Let’s go to work boys.”

With his signature smile, his casual uniform of Hawaiian shirt and flip flops and 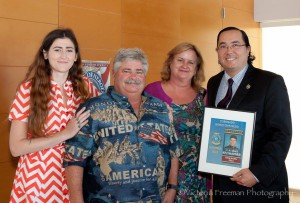 a delightful sense of humor Kyle had the innate talent of befriending everyone and making them feel that they were his best friend. He was an officer and a gentleman and his age is better calculated by the number of friends, not his years, and the worth of his life measured by the smiles he generated, not the tears.

Comics + College: A Mellow Yet Exciting Day at the Coronado Island Film Festival