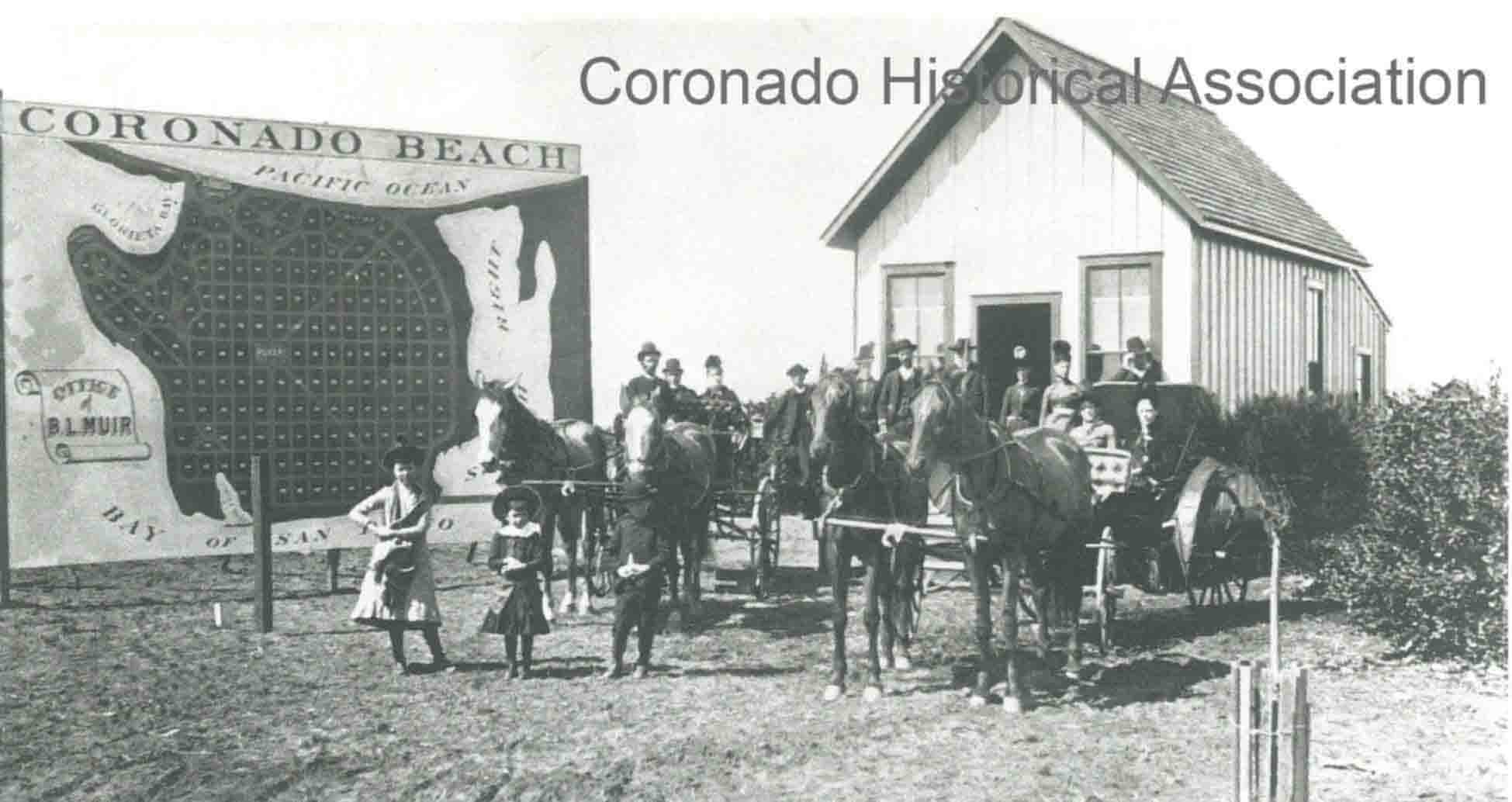 In May 1886 (a year before the beginning of construction of the Hotel del Coronado) the editor of the Los Angeles Times was staying in San Diego and penned a letter that was subsequently printed in Los Angeles with a VERY early and insightful view of Coronado:

“The entire peninsula has been surveyed, and the central and larger portion, situated directly opposite the town of San Diego, and elevated some forty feet above the sea-level, has been beautifully plotted and largely planted with choice trees, shrubbery, etc.

“The soil I found loam, warm and easily worked. A nursery of a hundred thousand plants has been established, and many of the embryo streets and avenues bear arboreal names, such as Palm, Date, etc.

“A street railroad, to run across the peninsula from shore to shore, is under way and will be completed shortly. One of the cars is already on the ground. A telephone line, twenty-five miles long, running almost the entire length of the peninsula and connecting with the mainland on the east, affords speaking communication with San Diego.

“Several subordinate companies, acting under the main [Coronado Beach] company, have been organized to push the enterprise along. There are two ferry companies, a street railroad company, a hotel company, a bathhouse company, etc. A large steam ferry boat is building at San Francisco for use between the mainland and the peninsula.

“The hotel [the Hotel del Coronado of course], it is promised, will be a grand structure, ahead of anything on the coast, and costing as much as $300,000. The projectors say that they will put a million dollars, all told, into the main [Coronado] enterprise, if so much be necessary to its perfect development; and I am assured by confident San Diegans, that they have “the stuff” to make the promise good.

“I should say, looking at the spot  uninviting as it is in its state of nature  that it would require even that large sum to make the peninsula blossom as the rose and bloom with the presence of a large seaside populace. But money, work, skill and taste will do wonders; and these coupled with the energy and persistence of the intrepid projectors [officers of the Coronado Beach Company], will yet make a notable place here. The plan is to sell residence lots in the tract, and so gather about the hotel and on the beaches a considerable permanent population.

“A few [commercial] buildings have already been erected. In every deed a stipulation is inserted that no spirituous liquors shall ever be sold or drunk on the premises. People who want to get drunk must do so at the hotel, which reserves a monopoly of the beer business. The prohibition is, I hear, causing a good many “kicks” [complaints], but the [Coronado Beach Company] stands firm, maintaining that it would be the ruin of the spot to allow it to be covered with saloons. They say that they have refused numerous urgent applications for the purchase of lots for saloon purposes. They have planted themselves solidly on the rock of Prohibition  with a loophole in the hotel to get into. They believe in temperance, but are not bigoted about it.”