On a rare date night my husband and I decided to take a short drive down the Strand to Mistral restaurant located at Loews Coronado Bay Resort. We heard that it had been remodeled, was under new management, and had a fabulous new chef (see his impressive resume at the end of this review – 15 Michelin Stars!). Normally the only time we hop in the car is to venture over the bridge or perhaps a mad dash to avoid being late to soccer practice, but after a few miles, we soon arrived at Loews Coronado Bay Resort. Living in the Village, it’s easy to forget about the resort and fine dining just a short drive away. We were blown away by the view, the service and the excellent food and as an amateur food critic, I’ll do my best to share my experience with you. 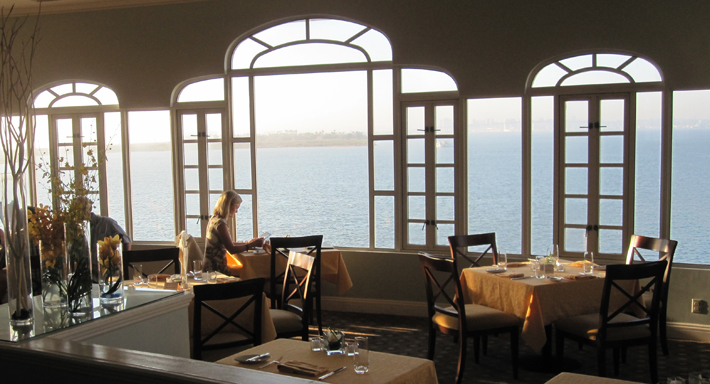 Our table overlooked the water and had a rare view of the Coronado bridge and downtown looking North. We started with two of their signature cocktails La Mystique Martini (Blackberry Stoli vodka) and the Green Flash (named for the mythological green flash you can see when the sun dips below the horizon with Midori Melon Liqueur). 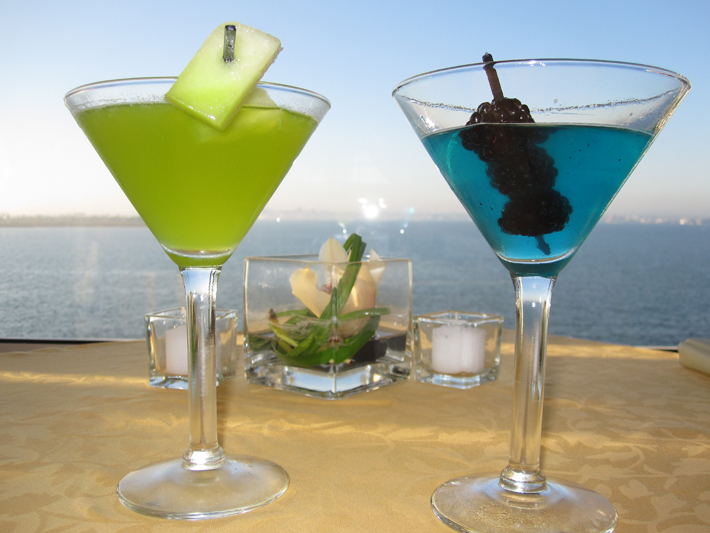 Next, we ordered a few appetizers: the Maine Lobster and the Wild Mushroom Ravioli. The combination of flavors, the freshness of the ingredients, the preparation and the presentation were top notch. After tasting the flavorful heirloom tomatoes we learned that all of the produce is locally grown and about as fresh as you can get. We savored each bite. We observed that was a regular practice of the server to deliver the chef’s specialty appetizers to each table. This was a very nice personal touch and we enjoyed it very much. 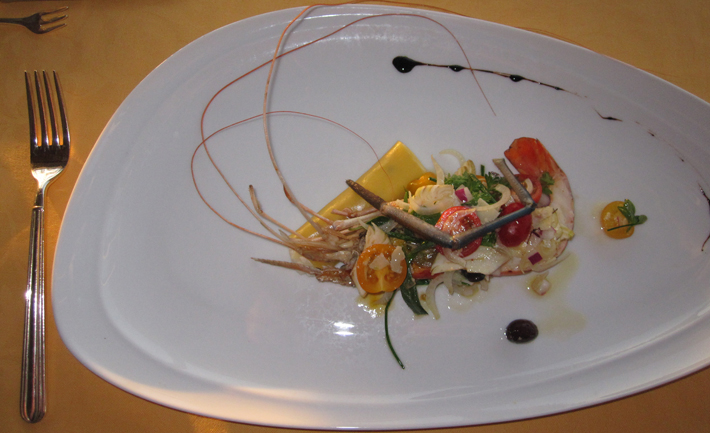 After much debate over what to order I chose the sautéed wild sea bass with lavender honey braised endive, orange blossom mousse, carrot-orange emulsion. It was perfectly cooked and the flavors were freshly unique. I could not get over how beautifully it was presented. It was a work of art! My husband had the Muscovy Duck Breast with yellow peach and red onion, marmalade tart, soft polenta and peppercorn sauce. We weren’t big fans of duck, but our server, Ryan, told us that this duck was unlike any we had ever had before- he was right! 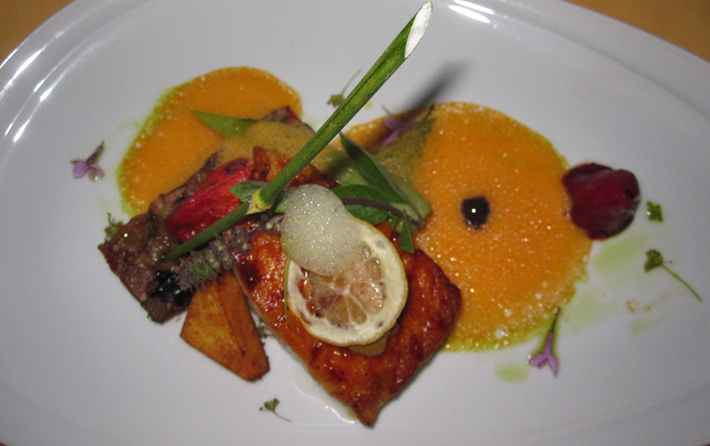 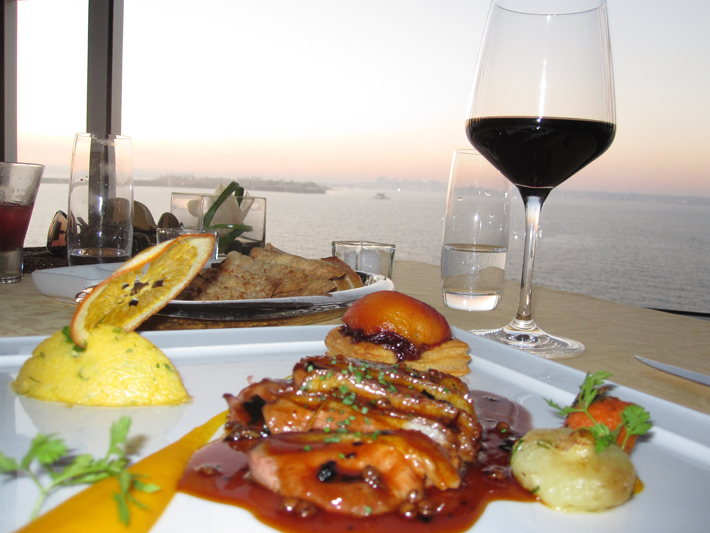 With barely room for dessert, but anxious to see if it was as good as the rest of the meal we ordered Bisou au Chocolat (aka “a French kiss from Chef Patrick”). It was a heavenly combination of crispy praline, bitter chocolate, brandied cherries and topped with chocolate sorbet. We dueled with our spoons to get our fair share. Our server, Ryan, also talked us into the Rhubarb and Strawberry Consommé with Lemon verbena ice cream and madeleines. This was the most delicious surprise of the night and paired very well with the chocolate kiss. Yum! 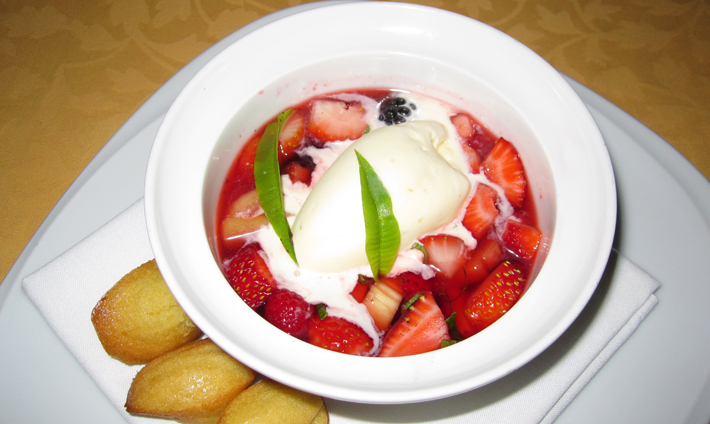 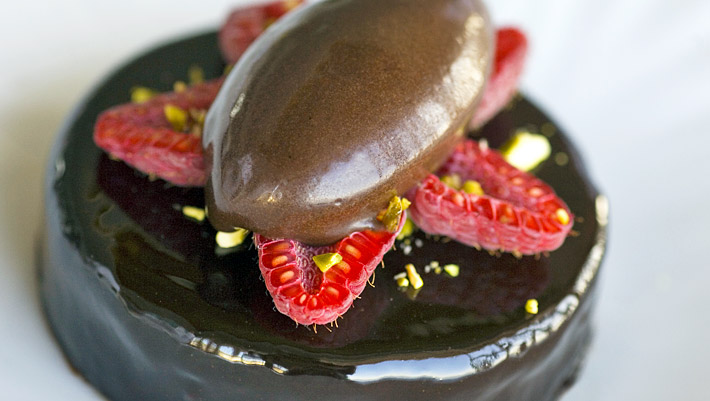 Mistral was one of the very best meals I have had in Coronado in a long time. It also felt like we got away’ from Coronado without having to leave the island. I was afraid that it would be a “special occasion” restaurant because of the higher prices, but I was surprised to learn that it was very competitively priced with some of the comparable restaurants in the Village. Our dinner lasted over two hours and was very relaxing. Mistral is a place to linger, watch the sunset and savor the delicious food. We are excited to go back during restaurant week (Sept. 19-24) and take some of our friends. 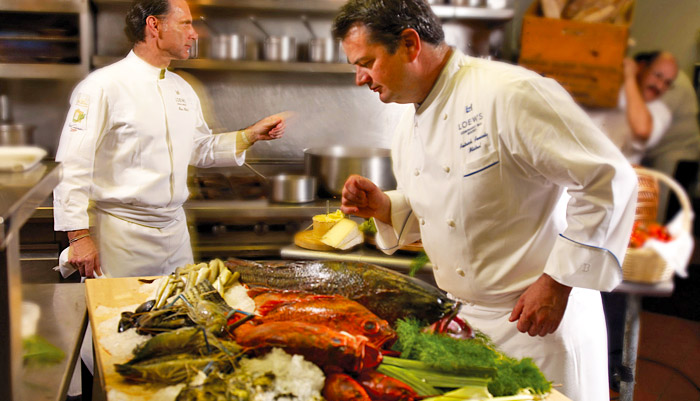 Influenced by years of extensive training in kitchens around the world, Chef Patrick Ponsaty brings 30 years of experience and an impressive 15 Michelin Stars to his role as Chef de Cuisine of Mistral at Loews Coronado Bay Resort.

A fifth-generation French chef, Patrick’s culinary career started in his father’s own restaurant, Cochon de Lait (the Suckling Pig), in Cazeres, near Toulouse, France. By the age of 10, he worked side-by-side with his father to prepare roasted chicken, fresh pommes frites and other traditional French recipes. He was raised with a strong sense of family heritage and years of classical training, which later provided the foundation to the simple, yet intensely flavorful, modern French cuisine he offers today.

Patrick graduated culinary school before completing an apprenticeship at one of the best restaurants in Toulouse. From there, he trained at a variety of Two- and Three-Star Michelin restaurants in France and Spain under the direction of legendary Chefs Didier Oudill, Alain Ducasse and Loews Hotels’ own Corporate Chef and French Master Chef Marc Ehrler. He has earned an impressive list of awards and recognitions, including “Best Hotel Chef in America” by James Beard Foundation and “Best Young Chef in Spain” by the Spanish Culinary Council.

Today, Chef Patrick reunites with Chef Marc Ehrler to take the helm of Loews Coronado Bay Resort’s signature restaurant, Mistral. His menu is best described as an evolution of French cuisine with robust, intense flavors inspired by Europe’s Mediterranean coast. He brings his fond childhood memories to life by utilizing the bounty of San Diego  a region that shares the same ecosystem as his hometown  and celebrates the immediacy of skilled farmers, foragers and fishermen. 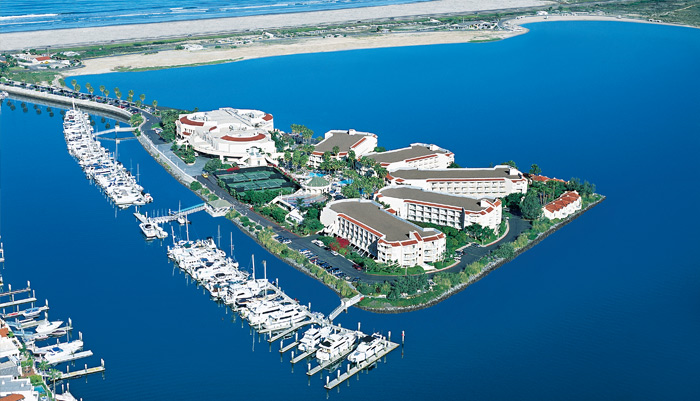 After two years of planning, permits and pandemics, the wait is over as Liberty Call Distilling in Barrio Logan has opened its doors to...
Read more
Dining

I’m not sure any of us truly understood how much we liked dining in restaurants until we were quarantined with stay at home orders...
Read more
Business

Is ordering out becoming a way of life for Coronadans? It seems to be that way for Coronado Optimists and Rotarians who...
Read more
Business

What does a new restaurant on the verge of opening do when a pandemic strikes? That has been the question facing Liberty Call Distilling...
Read more

Took the family into Mootime today and noticed they expanded their flavor offerings - at least 16 more! Just in time for the...
Read more

The following information was received by eCoronado.com from the city of Coronado: 8:54 am Report of a male possibly carrying rifle in...
Read more

Robbin Adair passed away at age 67 on Tuesday, October 23rd at San Diego Hospice. He was a high school teacher at CHS...
Read more

4.5 Earthquake Felt in Coronado was Centered in Ocotillo

I felt this one in Coronado, did you?From the LA Times: A shallow magnitude 4.5 earthquake was reported Tuesday morning 10 miles from Ocotillo...
Read more