The trustees of the Coronado Unified School District met on Thursday, December 15th at District Offices where four new trustees were sworn in. Scot Youngblood, Alexia Palacios-Peters, and Malachy Sandie took on their four-year positions as trustees, while Renee Cavanaugh assumed her position as a two-year trustee. The meeting started with the election of school board officers: Renee Cavanaugh was voted in as the new president, Scot Youngblood took on the role as vice president and Alexia Palacios-Peters assumed the position as clerk.

In board member comments, trustee Sandie thanked the community for voting for him, and acknowledged challenges the former board faced.

“I want to thank the previous board for leading us through some pretty trying times, including trustee Antrim who was a part of that,” said Sandie. “My focus will continue to be the CUSD mission of quality education for life, where we focus on preparing our children for higher education, for careers, for integration into society.”

Antrim thanked everyone who took part in the recent election, whether voting or running as a candidate. She noted the dedication and hours the new trustees had already put into their roles.

“I know we all want what’s best. So welcome, and congratulations to the four of you. There is a lot of opportunity to be really thoughtful and intentional on how we do things and why. And looking at that with fresh eyes is always a good thing,” said Antrim.

Trustee Palacios-Peters said she was honored to serve the community and looking forward to any challenges.

“I’m encouraged and excited to work with these trustees… and looking forward to doing the best I can to serve our kids,” said Palacios-Peters.

Youngblood said that the election was hard-fought, but it represented a great opportunity to talk to different members of the community and gain their perspectives.

“Even though you bring a perspective to a problem or to the schools or to this job, there are many such perspectives and we have to listen and incorporate everybody and keep the students in the focus, because that’s why we’re all here,” said Youngblood.

“I feel like the community members, through their vote, indicated they wanted to have perhaps a fresh perspective and fresh leadership for our team,” said President Cavanaugh. “So we are hoping to pull together and work together and do what’s best for students always.”

In his comments, Superintendent Karl Mueller shared that on Monday, January 23, Rocky Herron, retired DEA agent, will give a talk on the dangers of Fentanyl to both CMS and CUSD students. Heron will also give a parent presentation that evening and encouraged all parents to attend.

“I can tell you as a parent of two teenagers, I leave these presentations a little sharper on what to look for, what to listen for,” said Mueller.

In board business, the trustees voted to approve a positive certification of the first interim budget report as presented by Deputy District Attorney Donnie Salamanca. 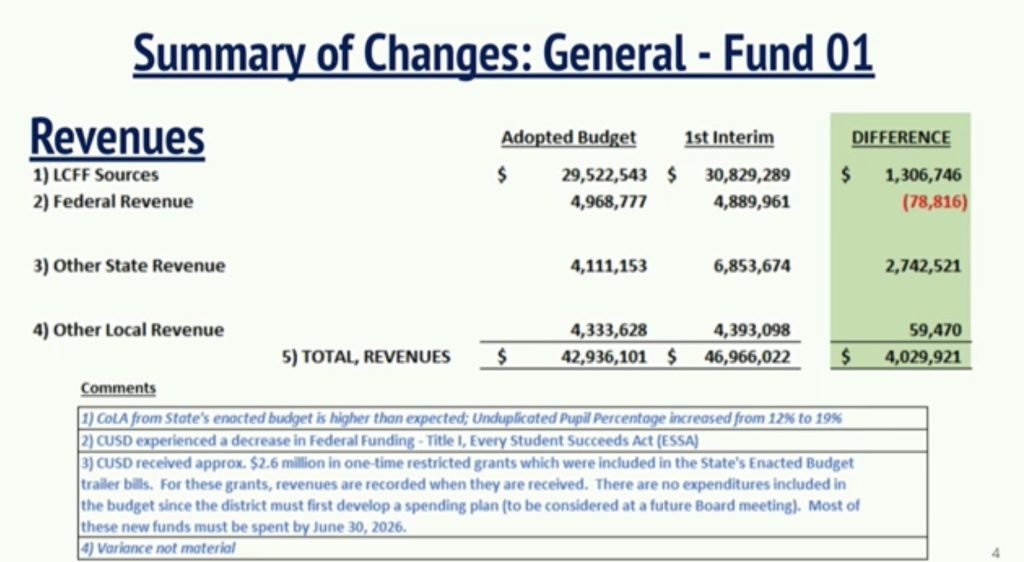 Jennifer Landry, the president of the Association of Coronado Teachers (ACT), shared information about the organization’s leadership, and that they are members of a professional organization, not unlike doctors or lawyers are a part of a medical organization or bar organization. ACT provides their members with training, educational opportunities, networking opportunities, legal protection, retirement information, as well as access to savings and discounts.

Dr. Coulter said that, when it comes to the STEM Read-1 grant, state test scores for ELA for CUSD have been stable.

“This is very positive. You’ve probably seen the news around the county, and around the state, and around the nation, and most test scores have declined. Yours were very stable this year which is something to celebrate,” said Dr. Coulter.

Trustee Youngblood asked if there was anything the board could do to help improve or address the reading scores of the military-connected kids in the third, fourth and fifth grades–those that seemed to suffer the most from pandemic-related challenges. Dr. Coulter said that even though the grant was ending soon, the learning department had plans to sustain the work related to the grant and to improve scores.

Superintendent Mueller, in his Long Range Plan Update, shared that staff was directed to secure bids for an outside safety consultant to review and evaluate existing site safety plans and strategies. Although Mueller said that the district engages in annual reviews with the Coronado Police Department, a comprehensive outside safety review has not been done since the 2012-2013 school year. He recommended that the board approve a $25,000 contract that will be brought for board approval in January. He said that, given the current timeline, CUSD would engage with the safety consultant for about six months and deliver a report to the governing board in June.

“I imagine some would say six months is too long when it comes to the safety of our children,” said Antrim. “I would suggest a study session on the intersection of safety, air conditioning and solar and electric issues… there’s a lot there, and when you pull on one thread, you start to become aware of other issues.”

Mueller said he supported the formation of the group as a place to house all of the information–including  a timeline–related to the intersection of school safety and air conditioning and electrical issues.

When it comes to a proposed list of agenda items for future board meetings, Youngblood said he wanted to add the discussion of creating a temporary committee to perform a 360 degree evaluation of the 4×4 program. It would involved getting feedback from teachers, students, staff and parents to see if there are changes and improvements to be made.

Earlier in the meeting, two members of the community, Jim Fabiszak and Carolyn Rogerson spoke up in public comments. Rogerson advocated for the more timely implementation of agenda items as they are brought forth by members of the public, and Fabiszak said that he hoped that the trustees would share their priorities with the community including how they will “help keep Coronado, Coronado.”

The next board meeting will be held on Thursday, January 19.