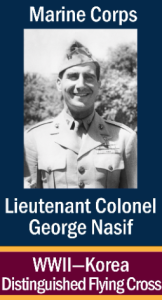 LtCol George Nasif joined the Marine Corps shortly after high school graduation in 1934, starting out as a bugler. While serving aboard USS Lexington, Nasif became interested in flying. Against all odds, he was selected from the enlisted ranks for training and received his Naval Aviation Pilot certification on March 18, 1942. He was sent to Naval Air Station North Island for further training. He became a “flying sergeant” in Marine Scout Bombing Squadron VSMB-131, the first squadron of its type. He and his three brothers would all serve in World War II, one in the Army Air Forces, one as a corpsman, and one as a photojournalist.

Nasif and his unit arrived at Guadalcanal in January 1943. His first mission on Jan. 28, 1943, was to attack a Japanese supply convoy escorted by destroyers. Here, he was the first Marine Corps torpedo pilot to hit an enemy destroyer directly, sinking it. He received the Distinguished Flying Cross and a promotion to second lieutenant. He went on to earn several Air Medals for actions in the Solomon Islands campaign.

Nasif ended the war as a captain — not bad for a man still officially listed as a staff sergeant. To keep his battlefield rank, he had to pass an Officer Candidate Test. As he turned in his test papers, the officer in charge shook his hand and said, “Congratulations, George.”

In the summer of 1943, Nasif joined Air Squadron VMTB-242 and was selected to train the new squadron up to combat readiness. He went on to participate in the Battle of Bougainville and the Marianas.

He continued serving his country and participated in the action against enemy forces in Korea. He arrived in Korea in 1952 as a major and assistant commander of the 1 st Engineer Battalion where he was commended with Combat “V” for his personal “initiative and selfless dedication to duty.”

He was promoted, one last time, to lieutenant colonel. He did not come back home unscathed, however. His service brought with it great challenges that today we might call post-traumatic stress disorder. Nasif retired in 1956 after 22 years of service to the Marine Corps and his country.