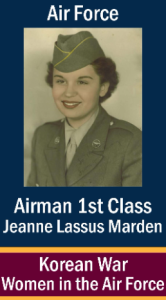 Written by: Cherie B. Collins (daughter)

Many fine things have come from the Napa Valley in California, including Jeanne Lassus Marden.

Marden was born on May 18, 1931, in Orland, California, and moved to Napa at 10 years old. A graduate of Napa High School class of 1949, she was the first Napa woman to join the military during the Korean War, in the largest single group of women in the San Francisco area to enlist in the Air Force in 1950.

When Marden moved back to Napa in 1966, she became the third woman in Napa to be hired by the U.S. Postal Service. As a dedicated mail carrier, she enjoyed being a friend, counselor, and helpmate to those on her routes. She retired from the Postal Service in 1991 and continued to live in Napa until moving to Coronado Retirement Village in 2009, where she enjoyed staying busy and having fun. She was an accomplished flower arranger, having
formal training in the Japanese style of Ikebana. She loved the artist Monet, winning at bingo and finding great bargains at garage sales.

When she passed away in September 2013, a small memorial service was held in Coronado and she was laid to rest next to her mother in Our Mother of Sorrows Catholic Cemetery in Reno, Nevada. She was the mother of five children: sons Michael Bowlin of Winters, California; Gary Bowlin of Phoenix; and Mark Marden of Napa; and daughters Kathleen Marden Cooney of Napa; and Cherie Bowlin Collins of Coronado.

Jeanne Marden was a very proud charter member of the Women in Military Service for America Memorial (now the Military Women’s Memorial), in Washington, D.C. Visiting it was on her bucket list, happily accomplished in the summer of 2008.