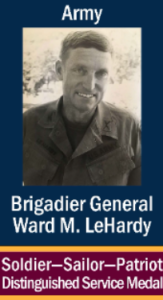 Ward Morehouse LeHardy was born in Annapolis, Maryland, in 1934 to Navy LT Louis LeHardy and Sara LeHardy. When he was 7 years old, his father was killed in action while serving as a staff officer aboard USS San Francisco during the Naval Battle of Guadalcanal. The family settled in Coronado, California, where LeHardy was raised in a little home on A
Avenue.

He attended Coronado High School through his junior year, where he made many lifelong friends. When it came time to enter college, he surprised many by selecting West Point over the Naval Academy. LeHardy joined the U.S. Military Academy Class of 1956 and, while there, met the love of his life, Judy Powell Nevins. They were married in November 1956 and a 62-year romance ensued.

Following graduation, LeHardy served in Korea and Vietnam. Other tours included Japan, Germany, Italy, the Panama Canal Zone, and several posts in the United States. A highlight in his service came in 1974 when he formed and commanded the 3 rd Battalion (Airborne) 509 th Infantry in Mainz, Germany, and lead the relocation of the battalion to Vicenza, Italy, becoming the only U.S. Airborne unit in Europe. He was proud to be a member of the
101 st Airborne Division twice, first as a lieutenant in the 1950s and again in the 1980s as a colonel in command of the 3 rd Brigade (Air Assault) and as division chief of staff. LeHardy was promoted to the rank of brigadier general in 1984 and went on to serve as assistant division commander of the 4th Infantry Division in Fort Carson, Colorado, and the second Army chief of staff at Fort Gillem in Georgia.

After retiring in 1988, LeHardy and his wife, Judy, set out to sail around the world. The couple circumnavigated the globe on their 39-foot sailboat Cormorant from 1991 to 1996. Their voyage included an emotional visit on Nov. 13, 1992, 50 years later to the day, to the spot in the South Pacific where LeHardy’s father lost his life in World War II. Ward LeHardy was a patriot, and it was the honor of his life to serve our great nation.