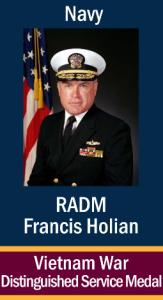 RADM Francis Holian is a 1968 graduate of the Naval Academy. His initial assignment was to a destroyer. However, like many junior officers at that time, he was reassigned to Vietnam as a Riverine Warfare advisor. Recognized for his service during this tour, he was selected to be the aide to RADM Robert S. Salzer, commander of all Naval Forces in Vietnam. Upon return to the states, follow-on at-sea tours included chief engineer of a destroyer, Mod Squad executive officer of a guided-missile destroyer, and commanding officer of the minesweeper USS Fortify (MSO 446). During his minesweeping tour, Holian successfully located two aircraft lost in separate accidents off the east coast. Subsequent at-sea assignments included commanding officer of USS Fletcher, a Spruance-class destroyer, and USS Fox, a guided-missile cruiser. During these command tours, Adm. Holian and his family lived in Coronado, California, and both his daughters graduated from Coronado High School.

Ashore, RADM Holian served as head of Navy congressional liaison to the Defense Appropriations Committees, where he worked closely with senior naval and congressional leaders for nearly four years. Upon selection to Flag Officers, he initially served on the staff of the Commander-in-Chief, U.S. Pacific Fleet, as head of finance, budget and personnel. During this tour, Holian was the staff officer responsible for overseeing the evacuation
of all military personnel and dependents from the Philippines following the eruption of Mount Pinatubo. His follow-on assignment was commander, Navy Region Southwest, colloquially, the Navy Mayor of San Diego. Recognized for building strong working relationships with the San Diego and Coronado communities, both City Councils established “RADM Fran Holian Days.” Following his assignment as commander of training for the Pacific Fleet, he retired in 1996. He then served for 10 years as Vice President for Northrop Grumman’s Undersea Systems division.

In retirement, RADM Holian has served as chairman of the Naval Training Center Foundation responsible for the conversion of the property into Liberty Station; served as chairman of the United Though Reading organization directly supporting military families worldwide; and currently serves on the San Diego Maritime Museum board. Ever a sailor’s sailor, RADM Holian continues to hoist the burgee of the Coronado Yacht Club.