It’s a wrap on the seventh annual Coronado Island Film Festival (CIFF) that was bigger and brighter than ever, with five thousand attendees and more than 50 events, featuring panels, Masterlab workshops, documentaries in a variety of genres, feature films, industry tributes, shorts, and an array of outstanding cinematic events. Here is just a sampling of highlights ~ 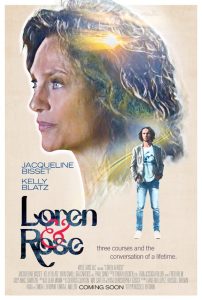 What a treat to hear international film star Jacqueline Bisset talk about her latest movie “Loren & Rose,” with acclaimed film critic and CIFF Honorary Jury President Leonard Maltin, on stage at the Village Theatre after the movie screening on November 11.

“I loved the script immediately and was overjoyed I could push the scope of the story,” she commented. The film takes place in a three-act story — appetizer, main course, and dessert — in a Topanga Canyon restaurant, and Bisset pointed out that filming took just nine days. It starts at lunch with upcoming filmmaker Loren, played by Kelly Blatz, who is considering Bisset, as Rose, for the lead in his next film. The friendship blossoms after their collaboration and continues as she entrusts him with her final secret. Rose’s decades-long film career is showcased as items are auctioned off by her daughter.

“Cinema is the most insane business. You never know how the audience will react,” says the sophisticated 78-year old Bisset, noting how the industry has totally changed from when she first started acting. She was also in conversation with Maltin following a retrospective screening of her groundbreaking film Day for Night, which premiered at the 1973 Cannes Film Festival, and went on to win the Academy Award for Best Foreign Language Film. Bisset was awarded the Cultural Icon Award at the CIFF Leonard Maltin Industry Awards Gala. 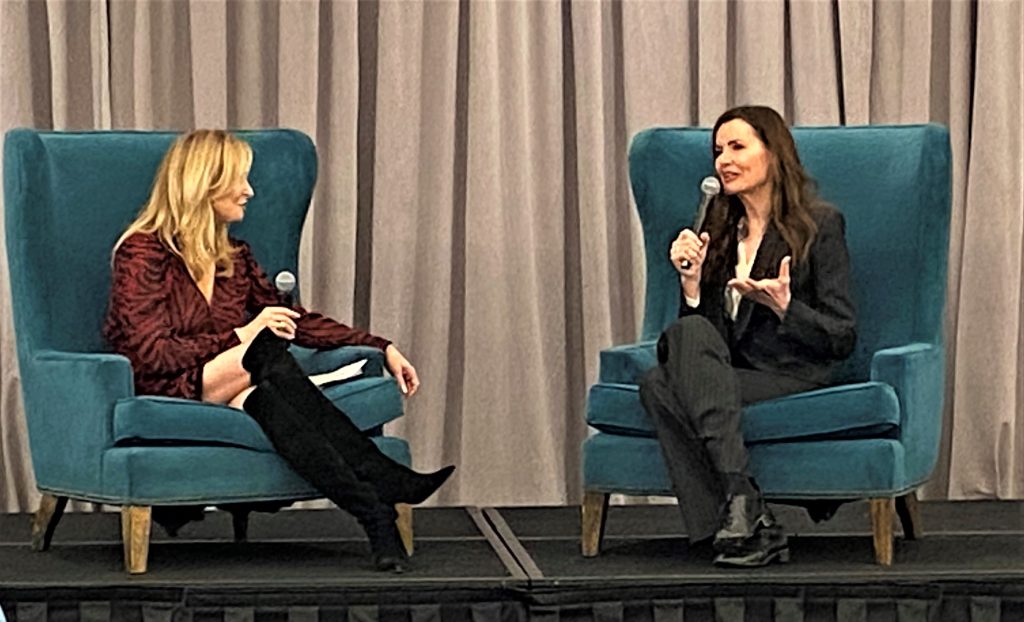 Talented, Athletic, and Funny: Geena Davis is the Epitome of Badassery

Sharing stories of her ridiculously polite family growing up, two-time Academy Award winner Geena Davis detailed her road to badassery as she honed her acting skills playing gutsy roles in epic films along the way. Davis, who received this year’s CIFF Legacy Award, was in conversation with award-winning journalist Sandra Maas in Founder’s Hall at The Del on Saturday, November 12. With a great sense of humor, she told life stories and remembers wanting to be in movies at the age of three. She chuckled telling of her accidental start as a popular live mannequin in the window of a New York Ann Taylor store where she worked. Her first starring film role was in Tootsie with Dustin Hoffman, who she met for the first time in her underwear as filming began. He became a mentor, offering sage advice, suggesting reading lots of books, watching dailies, and never sleeping with costars, all things she took to heart.

For more than a year, she persistently lobbied to get cast in the blockbuster Thelma and Louise. Originally wanting the part of Louise, she realized she was right for Thelma after meeting the dynamic Susan Sarandon, who is still a good friend. She gives herself credit for helping to launch Brad Pitt’s career, when she selected him over three other potential actors, one of whom was George Clooney. With the 30th anniversary of A League of Their Own, she notes that she was physically shy, because of her height at six foot, and had never done sports but worked hard and mastered playing baseball as a Rockford Peach.  Through the years, she has even done many of her own stunts. Intrigued by seeing archery in the Atlanta Olympics, she took up the sport at 41, qualifying as an Olympic archery finalist just two years later. “I become obsessed to be the best at everything,” she laughs.

In addition to her unforgettable movies, don’t forget The Accidental Tourist, The Fly, Beetlejuice, The Long Kiss Goodnight, and the loveable Stuart Little, she also starred in one of her favorite roles as the first woman president on the Fox television series Commander in Chief. She is mother to twin sons and a daughter in their 20s, and in addition to her successful acting career started the non-profit Geena Davis Institute on Gender in Media. The Institute engages film and television creators to dramatically increase the number of female characters, and reduce gender stereotyping, in media made for children. She highlighted that she started it after watching children’s shows with her daughter and wanted to bring real change for the future. When the Institute presented their gender inequality data to Disney executives, they were surprised at the disparity and promised to do better. There have been positive strides industry wide. 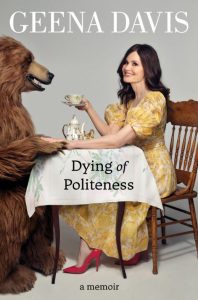 She cites that media influences, like the CSI television series, have had a dramatic effect and 65 percent of forensic science students today are women. She also points to Dana Scully, from the Fox television show X-Files as contributing to 60 percent of women citing that character as inspiration for going into science.

When Maas asked how she wanted to be remembered, Davis emphatically chimed in, “I wish I’d spent more time working, because I love it!” I read the first few pages of her new book, Dying of Politeness, while I was waiting for the event to start, and I’m hooked! She is also writing and illustrating a children’s book titled The Girl Who Was Too Big for the Page. 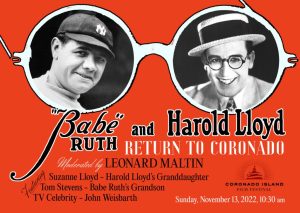 I couldn’t resist the chance to see Babe Ruth’s grandson, and his storytelling of Ruth’s life didn’t disappoint. Tom Stevens, Babe Ruth’s grandson, Suzanne Lloyd, Harold Lloyd’s granddaughter, Babe Ruth Historian Tim Reid, respected film critic and historian Leonard Maltin, and TV celebrity and former San Diego Padres announcer John Weisbarth hosted a panel to share insights about the duo. It’s been 85 years since Ruth wore a baseball uniform, but his appeal is still universal, and he is considered “the greatest to ever play the game of baseball.” Ruth first came to Coronado during prohibition and stayed at The Del numerous times through the years, while Lloyd and his wife honeymooned there in 1923.

“His legacy has enriched our family’s life,” said Stevens, who relishes being born into baseball royalty, even though he never got the opportunity to meet Ruth. Kind and caring, especially to children, were traits family and friends admired, and he belonged to more than 50 charitable organizations. In 1902, after school truancy, he was sent away for 14 years to St. Mary’s Industrial school where he was trained as a tailor; and where he learned all positions while playing three to four baseball games a day. At the age of 19 Orioles Manager Jack Dunn recruited him and became his guardian, and thus began his major league baseball career. One of his lesser known traits was his superstitiousness where he always touched second base between innings, as if to say, “I’ll be seeing you soon,” Stevens pointed out.

During the event, the first baseball movie filmed was shown. Impressive for 1898, Thomas Edison’s 27-second film was followed by a variety of other clips from movies made by Lloyd, in which he also starred, beginning in 1915. Ruth’s baseball fame transcended, and he became wildly popular as a movie star in the 10 films he was in between 1920 and 1942. In fact, the scene in Headin’ Home where Ruth carves a baseball bat out of a tree was the inspiration for a scene in The Natural starring Robert Redford. He was one of the most photographed men of the era and had more than 200 nicknames and 500 biographies written about him. Lloyd made 200 comedies, both silent and talkies, between 1914 and 1947. His granddaughter shared that Lloyd loved baseball, and that he was the first to take a film crew on location. His distinct influence helped pave the way for the future of film. For more on these fascinating figures, check out www.baberuth.com and haroldlloyd.com.

It would be impossible to attend all the amazing CIFF events, which are curated to feature something for everyone, including critically acclaimed movie premieres like Empire of Light, The Inspection, and She Said. CIFF attendees and guests dressed up for the red carpet Leonard Maltin Industry Tribute Awards Gala, as well as honored veterans and enjoyed local films. An exceptional five-day event, plans are already underway for next year’s festival.  Keep up to date on events throughout the year at coronadofilmfest.com.