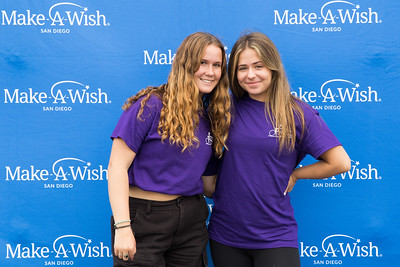 Reagan Yeager and Rylie Brenden, two Coronado High School seniors, have a unique passion for fulfilling children’s wishes and bringing joy to those in most need. These Islanders use their creativity and compassion to coordinate events like the 13th Annual Amazing Race for Children’s Wishes to benefit the Make-a-Wish Foundation. Volunteers since middle school, the two are now committee members and have successfully executed their third consecutive annual event.

On October 2nd, the 13th Annual Amazing Race for Children’s Wishes was held in the Coronado Cays to raise money for the San Diego chapter of the Make-a-Wish Foundation. The non-profit organization raises money to grant a single wish to children with life-threatening illnesses.

Rylie shared, “A misconception is that a lot of kids are going to die and this is the last thing we’re going to do for them, but the goal of Make-a-Wish is to create hope for the kids while they’re going through really tough treatments and just give them a fun day.”

The Amazing Race event is based off of the TV show The Amazing Race. Participants formed bike teams and raised a minimum of $2500 before competing in challenges at multiple locations throughout the Coronado Cays. As committee members, Reagan and Rylie coordinated the bike aspect of the event, which included creating clues, organizing volunteers, helping participants during the event, creating the challenges and games, and coordinating which volunteers were placed at which stop. The two also sent the participants off to their stops and calculated the scores at the end of the day.

Overall, the event raised a staggering $81,589. An average wish costs about ten thousand dollars, so the high school seniors ultimately helped to grant a wish to eight kids. There were two Wish kids, Eden and Carley, at the event. Eden was diagnosed with leukemia and wished to have a greenhouse built in his backyard. Carley has cystic fibrosis and wished to go to DisneyWorld.

“I just cry every time the Wish Kids talk; I bawl my eyes out,” Rylie shared. “It really helped to listen to their firsthand accounts of the hardships throughout their treatments. It really just warms my heart to hear how much a wish means to a kid. Even though to us it may just seem like a day at Disneyland because our lives are so normal, these kids don’t get to grow up with normal lives, so getting to experience something as simple as going on a vacation or getting to Disneyland is so special to them. Hearing them tell their stories really just touches me.”

Growing up, Rylie’s mom was heavily involved with the organization, and Rylie took inspiration from her to help with the charity. “Living in Coronado we have privileges that other people don’t have, so I thought it was a great way to help kids who aren’t in the same position as me,” Rylie explained.

“I knew Mrs. Lively and I knew that her son had cancer, so I talked to my mom about it and we got involved in the Make-a-Wish Foundation. We ended up requesting Joshy to be our Make-a-Wish kid, and we were able to send him to Disneyland,” Reagan shared. “It was a great way to connect with the local community and he definitely inspired me.”

Reagan plans on continuing to volunteer with the foundation past high school and into college. She aspires to major in business, and her experience with fundraising and coordinating events as part of the Make-a-Wish crew has inspired her to continue to help others.

Rylie is also keen on remaining close with the organization, “I’ve always wanted to have an official job with Make-a-Wish because I’m just a volunteer right now, but I would love to work with the organization more on the back end as a wish granter, who works with the kids throughout the entire process of figuring out what they want to wish for.”

Reagan and Rylie’s heartfelt efforts have not only made an indelible mark in these children’s lives, but they have truly been an inspiration and model for the community to emulate.