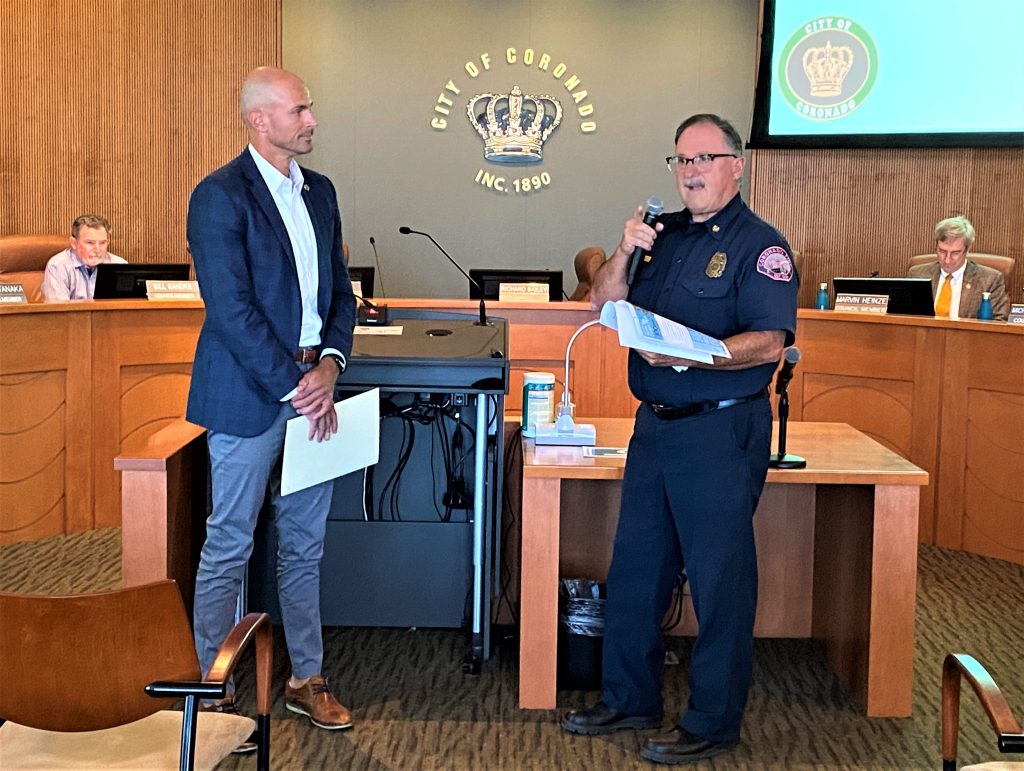 Fire Prevention Week was highlighted when Mayor Bailey presented a proclamation to Fire Chief Mike Blood in recognition of the national celebration, which promotes the theme “Fire Won’t Wait. Plan Your Escape.” Blood invited the community to the 24th annual Public Safety Open House on Sunday, October 9, from 11 am to 3 pm, at the Coronado Fire and Police Departments. Guests can enjoy food, music, rides on the little fire truck, a rock climbing wall, information booths, and other kids’ activities.

The final and major topic discussed at the October 4 council meeting was the Cays Park Master Plan RFP to solicit design bids. The project will now be headed by Assistant City Manager Tony Winney, who noted that a robust community engagement will be solicited through park usage, workshops, and surveys. Interim Recreation and Golf Services Director Ellie Oppenheim presented six options that could be implemented in the interim as short-term solutions with no physical changes.

Option 1, which was approved by council, is to amend field allocation permitting periods from two to three seasons per year. This will enhance management of seasonal needs and priorities, as well as increase ability to permit recreation summer programs.

City staff liaised with Peter Collins, director of competitive soccer, Coronado Youth Soccer League, which primarily reserves the fields. He said at the meeting that 75 percent would work for them, with a maximum of 24 teams and two teams on a field at a time. The fields are reserved weekdays from 3 pm to 7 pm and regularly on weekends. Oppenheim noted that proof of residency auditing and field use monitoring have started. There are four weekends each year when annual soccer tournaments are played on all the available Coronado fields and are scheduled in advance. These will now be required to go through the city as special events.

During public comment, Kevin Reilly referenced his letter to the council and suggested that the city complete an RFI (Request for Information), rather than an RFP, which he felt would allow them to consider Cays residents needs other than just sports, and specifically soccer. The council agreed that the process for the Cays Park Masterplan had not been smooth, especially with the pandemic delay, but they felt that an RFP was the right way to move the process forward and allow for public input. The council approved the first motion of incorporating option one right away.

Councilmember Donovan made a motion to activate option 2B, which involved altering the number of fields for active use, but it did not pass, with Councilmember Sandke voting yes, and Mayor Bailey and Councilmembers Tanaka and Heinze voting against.

A third motion was unanimously approved to proceed with the RFP. There was discussion on if the original 100-75-50 percent parameters of current active space should remain. Mayor Bailey said he felt the community embraced youth activities and wouldn’t reduce field usage by 50 percent. He suggested “maintaining space necessary for usage for youth activities with the maximum amount of passive use.”

Finally, a motion was made to reaffirm the previous council direction and was approved with Councilmembers Donovan, Tanaka, and Heinze voting in favor, and Councilmember Sandke and Mayor Bailey voting against. City Manager Tina Friend said that a newly formed interdepartmental team of staff from Public Services and Engineering, Recreation & Golf Services, and City Manager’s Office will be led by Winney to spearhead this project.

The houses that applied for the Mills Act in 2021 were presented by Historic Preservation Associate Planner Tricia Olsen. A Mills Act Agreement is a contract between the property owner and the city, where the property owner agrees to preserve, restore, and rehabilitate a designated historic resource throughout the term of the annually renewable ten-year agreement. In exchange, the property owner receives a reduction in property taxes. With this approval, the total Mills Act designated homes is 172 since the program’s inception in 2000. The council unanimously voted to approve Mills Act agreements for 1156 Isabella Avenue, 749 C Avenue, 520 J Avenue, 563 Alameda Boulevard, 575 A Avenue, 620 1st Street, 855 Alameda Boulevard, and 500 J Avenue.

Then a lengthy discussion ensued among the council about the remaining two properties that city staff recommended for denial of Mills Act designation.

For 763 C Avenue, Olsen pointed out that the denial was in part due to extensive demolition done in 2008, and that “not many historic elements were left in the home.” The council denied this property for Mills Act designation. Councilmember Donovan queried Olsen as to what happens if the recommended changes are not made within the required 10 years. After some research by Olsen and the opinion of City Attorney Johanna Canlas, it was determined that the homeowner would have to pay a penalty of 12.5 percent of the assessed value and the agreement would then be terminated.

The homeowner of 654 J Avenue pointed out the house was in disrepair when it was purchased, with black mold, rotting windows, compromised stucco and much more. She said the home was historic and they had used as many original materials as possible like concrete stucco, wooden windows, the original front door, and metal window grates. This was corroborated by project architect Christian Rice, who also indicated they tried to follow the nine designation points throughout the project. A small second story addition was also added to the home. Mayor Bailey said, “As a council, we try to incentivize restoration, and this is a good restoration for what they had to work with.” Councilmember Tanaka felt that the criteria had not been met and the home didn’t look the same. When asked if the homeowner could go back to HRC, Canlas said that the council was required to make a decision and that no one had ever reapplied for Mills Act designation.

Community Development Director Rich Grunow gave a brief introduction of the Development Impact Fee (DIF) report that was requested by council in October 2021. An RFP was released in February 2021 and a contract was awarded to DTA in June 2022.  DTA Senior Associate Richard Ruiz gave a presentation on development impact fees, which are one-time fees paid at the building permit stage, assessed against new development projects to finance new or expanded public facilities, infrastructure, and/or programs required to serve the project.  The current DIFs and potential new fees are detailed on the graph below. 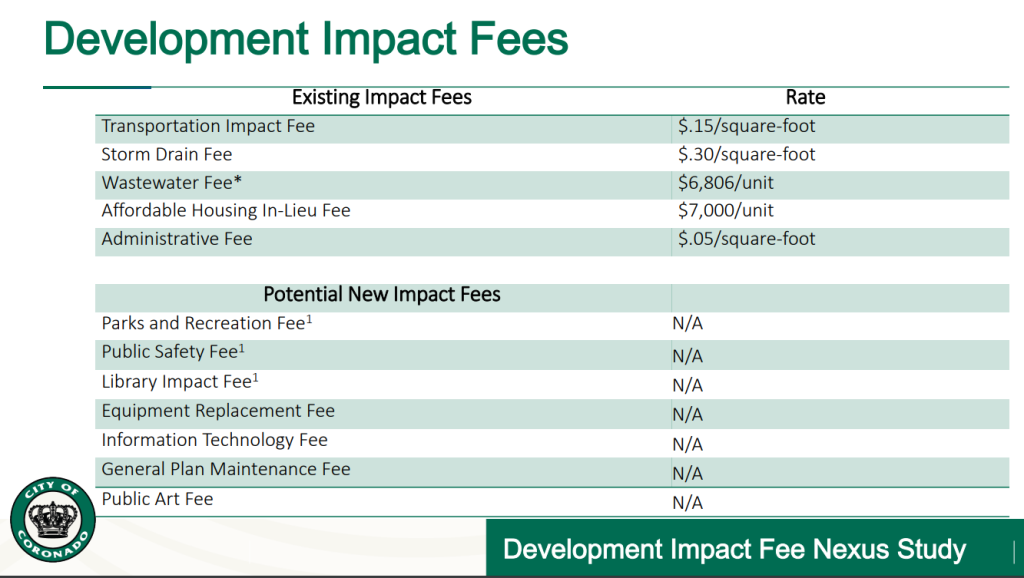 Ruiz pointed out that legally, impact fees require a “nexus” or “reasonable relationship” between the fees and impact of development. Development must create a need for facilities funded by impact fees and must benefit from facilities funded by impact fees. They must also be proportional to the impact of the development. The new AB 602 law, passed in 2021, has created a shift from charging by the unit to now be proportionate to square footage. DTA will go through a process, which includes data collection, looking at land uses and fee calculation methodology, as well as reviewing seven similar coastal cities’ DIFs, and research with city staff, and then present their findings and recommendations to council in March 2023.

Everyone on the council felt this was way overdue, because it has been 30 years since it was last evaluated. Councilmember Tanaka was adamant that he did not want to see extra fees added on. Councilmember Donovan disagreed and said that when the fees were set in 1995, the council didn’t vote to charge the full recommended fee amounts, and Councilmember Sandke pointed out that potentially $45 million was left on the table, so it was good to look at all the potential fees to make the best decision. The council approved this item to include looking at all the possibilities, which they all felt was long overdue.

Associate Planner Marissa Smith gave a brief presentation on a request for a two-lot tentative parcel map at 910 Alameda Blvd. The triangular-shaped lot is located at the southern intersection of Alameda Boulevard and Country Club Lane. This proposal came with a recommendation from the Planning Commission, and is for the land division only, with no new development currently proposed. Neighbor Doug Vaughn pointed out that accidents have occurred on that corner and recommend a crosswalk on 10th and Alameda Blvd. After a discussion confirming that this was compliant with zoning regulations, Councilmember Tanaka said, “This is not a vote about who likes density, but about upholding the law.” The council unanimously approved the new parcel map.

In Oral Communication, Tina Christenson and Kevin Reilly expressed their disappointment with the loss of the RHNA litigation and encouraged the council to keep fighting, and asked the public to let their legislators know this is an unreasonable request and takes away local control.

Interim President of Coronado Fourth of July, Robert Kracht, said that the July 4 activities in 2022 were a great success, and noted that former President Todd Tanghe, Vice President of Development Robb Huff, and Kraig Nicolls recently resigned from the committee and so they are looking for additional volunteers as they move forward in planning for 2023. The Mayor, City Manager, and City Council extended their gratitude to Tanghe for his years of dedicated service making 4th of July in Coronado spectacular.

Roberta Korte was appointed on the Cultural Arts Commission for the remainder of a term expiring December 31, 2025.

Quarterly Projects progress report ~ More than 45 active projects are in process from the Cays Park Master Plan to downtown beautification, the Parker Pump Station, E-bike safety campaign, and many more.

“The Knot” bronze sculpture, donated to the city by the Wood Family Trust, was recently installed at the Glorietta Bay Park Promenade.

Live Motorcycle Education Grant Funds from the California Office of Traffic Safety (OTS) were accepted in the amount of $65,000; and the City Manager will enter into an agreement with San Diego State University (SDSU) and National City for assistance with Ride to Live events, reimbursable through OTS grant funding.