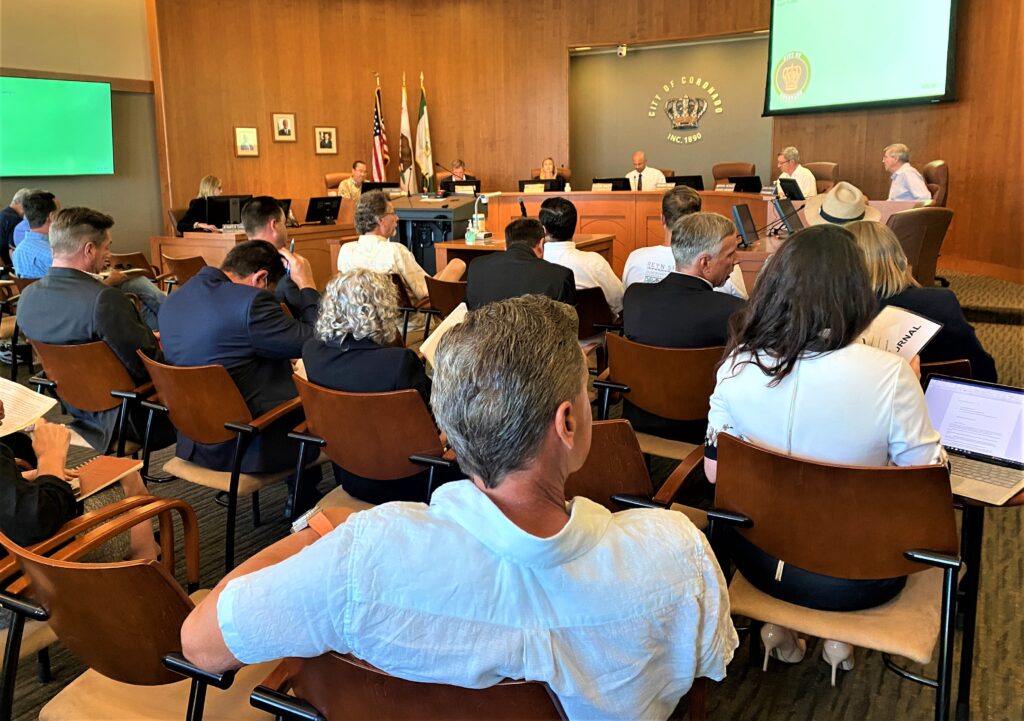 The appeal reconsideration of the design for Blanco Restaurant, in the La Avenida Complex at 1301 Orange Avenue, brought out a large crowd of residents, with 14 of them speaking during public comments. Senior Planner Jesse Brown gave a recap of the project, which was first brought to the Design Review Commission (DRC) on April 13, 2022, and was continued to the April 27 meeting, where it received conditional approval. The DRC approved the project with the removal of the three arches along Orange Avenue, which would be replaced with large doors to create an open space feel. They asked for the front arch to remain the same and an updated landscape plan. Rather than return to the DRC for final approval, they appealed and got the project approved by the city council on July 19, 2022. Councilmembers Heinze and Donovan requested an appeal of this approval because the public did not have sufficient time to weigh in on this project due to a lengthy meeting.

Leezie Kim, Chief Legal Officer, Fox Restaurant Concepts LLC, and business partner of Sam Fox, indicated that based on the July 19 council decision, they were due to start construction on the Blanco project the next day, which would work with their opening target of April 25, 2023. If they have to go back to redesign and DRC for approval, then they couldn’t start construction until January 2023 with the opening pushed to August 27, 2023. She emphasized the disruption it would cause to the above tenant Stake Restaurant, and the unappealing construction site during the busy summer tourist season. She said, “We have done everything by the book and been a good partner with the city,” noting that it has taken eight and a half months to get a permit to renovate an existing restaurant space, which is excessive.

Prior to the meeting, the city received several letters from lawyers for Fox Restaurant Concepts LLC, stating that if the council was to deny the appeal, then they would be seeking damages of at least $3,149,701 for potential additional expenses incurred for delays. The city also received letters from several residents and the CHA asking to maintain the architectural character of the La Avenida complex. At the council meeting, some of the community speakers praised The Henry restaurant by Sam Fox and said they look forward to Blanco as a great addition. But many voiced their opinion that as a role model building, the historic arches should be maintained to keep the Coronado feel as outlined in the Orange Avenue Corridor Specific Plan.

Mayor Bailey asked City Attorney Johanna Canlas if this decision could be sent back to DRC and was told that the council is required to make the final decision on appeals. Councilmember Donovan said that the community feedback was appreciated, and it was time to move forward to avoid legal issues, even though he would love to have the arches back. Councilmember Tanaka indicated that he felt the applicant got a good deal from DRC and they did not get this decision wrong. He also noted that other buildings, like the gym at 9th and Orange Avenue, had arches which followed the style of the La Avenida complex. Ultimately, the motion was made to approve the landscape plan and the design with the arch maintaining the original shape and it was approved with Councilmember Sandke recused, and Councilmembers Tanaka, Heinze, and Donovan voting for it, and Mayor Bailey against.

City Manager Tina Friend gave updates on ebike safety in her report. She noted that there is currently an education campaign going on. Also, an interdepartmental taskforce has been created to look at regulations, enforcement, and needed signage changes, and will come back with recommendations. They are also partnering with the community, schools, MTS, and other organizations to help with this issue. With regards to water quality testing, she noted that the city is involved in ongoing advocacy and discussions with the county to find a balance of good water quality and beach access.

The Port of San Diego has moved their consideration of the proposed Cays RV Resort to early 2023. Friend commented that the outreach meeting will be rescheduled closer to that date. The Cays Park Master Plan design has changed directions since the pandemic, and after the city received three draft plan concepts from Van Dyke Landscape Architecture (VDLA), they felt they wanted to terminate the contract and go in a new direction. On the consent calendar, the council approved this and the next step to create a new Request for Proposal (RFP) to restart the project, based on the current understanding of the project and community expectations, with another firm. Friend indicated that the RFP will be brought back to council to validate that the project is on the right track.

Associate Planner Marissa Smith gave a brief presentation for the public hearing requesting the demolition of the home at 711 F Avenue, with the approval of construction of two condominiums. This project has received DRC and Planning Commission approval and was unanimously approved by the council. A neighbor Chris McGuire asked for window placement consideration, based on the new height and setback of this new project.

Councilmember Sandke asked for the extension of the restaurant outdoor dining program and parking requirements waiver through December 31, 2023, or one year after California ends the current COVID State of Emergency, whichever date comes first, to be placed on the Consent Calendar for approval.

Also on the Consent Calendar, the council approved temporary closures of portions of Sixth and Seventh Streets, D Avenue, and Palm Avenue for the annual Coronado Public Safety Open House on Sunday, October 9, from 6 am to 5 pm.

In Oral Communication, Tim Shidler brought in his broken car side mirror that happened after a hit and run incident near his home, and implored the council to take action to increase safety on A, B, and C Avenues, which are regularly used as thoroughfares.

Mayor Bailey mentioned that the Executive Director of SANDAG has been undermining the direction of the board, with regards to the road usage charge, and this will be addressed at the next SANDAG Board meeting.