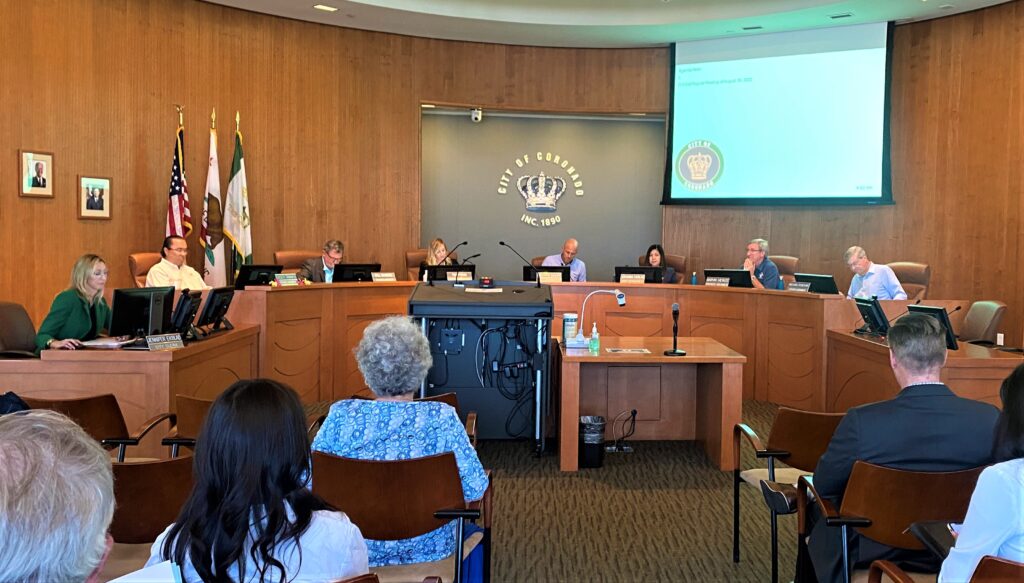 In Oral Communications at the August 16 council meeting, Old Goats and Kids Who Care Founder Nancy Ratcliffe thanked Blue Bridge Hospitality Principal and local resident David Spatafore for his generous support in helping them provide meals and treats to thank healthcare providers, first responders, and wounded warriors for the difference they make the community.

Coronado Cays Homeowners Association General Manager Henry Angelino spoke about the proposed North Grand Caribe Island RV Park and how Cays residents have submitted a letter opposing the project for numerous reasons including no community outreach, traffic issues, increased density in an environmentally sensitive area, and other issues. He encouraged the city to also submit a letter opposing the project just as they did previously when a hotel was proposed for that site. In the City Manager’s Report Tina Friend noted that Port Commissioner Frank Urtasun, Coronado’s representative, got the vote delayed to the September 13 Port meeting to allow time for community meetings, which will take place on August 31 and September 27. Initially, the Port will decide whether to proceed with this RV project for further consideration, which will ultimately be a multi-year approval process. An opposition letter to the Port from the city will be presented at the September 6 meeting.

City Manager Friend also noted that beach water quality continues to be a high priority with city staff collaborating with the county to understand the shift in testing and come up with the best solutions. She also said that a contract has been finalized for municipal services between Coronado and the San Diego Unified Port District for 2023 through 2030. The last contract was done in 2012, and this new eight-year contract guarantees $3 million yearly, with a four percent escalator, for the city to provide public safety services, including police, fire, lifeguard, and emergency medical services. Built into the contract is a reset in 2025 and 2028, where a cost model relook will be done for capital investments. Councilmember Heinze asked if the maintenance services requested by the council had been considered, and Friend said the Port declined those additional services. This contract was unanimously approved by the council.

Police Chief Chuck Kaye gave an encouraging police update noting that the department is comprised of a variety of areas to keep the community safe. These are: patrol, traffic-motors, investigations, senior volunteer patrol, narcotic task force, joint terrorism task force, school resource officer, public information office/training, fiscal, dispatch, records, and property and evidence. He gave crime statistics, noting that there has been an uptick in aggravated assaults, mostly with domestic violence issues, as well as more DUI arrests. Resident burglaries are down so far this year, while there has been an increase in commercial burglaries. He outlined that there have been 4,571 officer initiated traffic stops and 6,529 location checks to date this year. With 270 total arrests in 2021, this year officers have made 287 arrests, with 226 of those misdemeanors and 61 felony arrests. There have also been 19 homeless bed placements with Father Joe’s Villages. 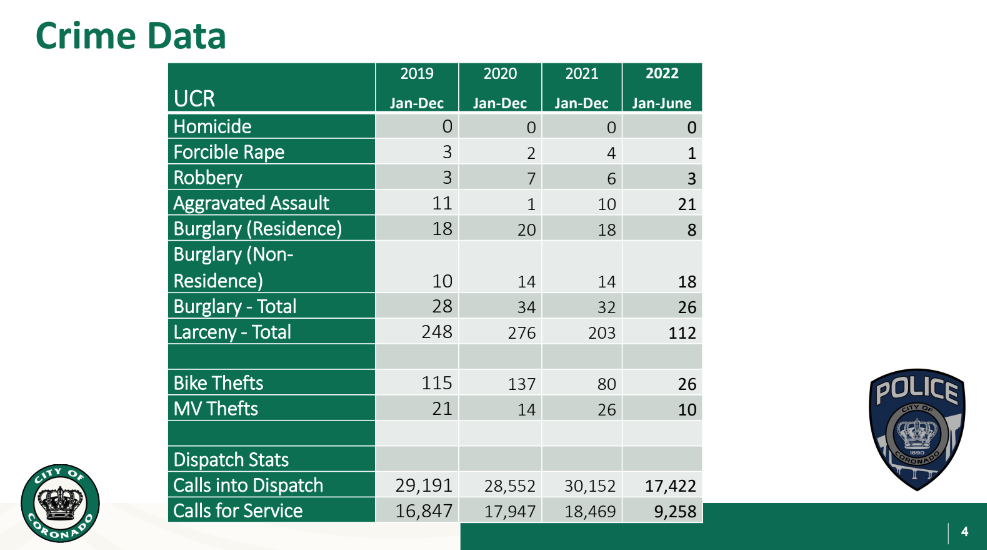 With e-bike safety a huge concern, officers have given 45 bicycle citations and 119 warnings this year, compared with nine last year. With the new LPR technology, police have issued 2,838 citations so far this year, as opposed to 565 in 2021. New methods of controlling crime include fixed cameras at First and D Avenues, First and Orange/Centennial Park, and the Ferry Landing parking lot, as well as a remotely monitored e-bike, Ferry Landing security guard, and crime mapping. He encouraged residents to use the Ask Coronado app, as well as contact Traffic Director Matt Mitchell with questions and concerns. 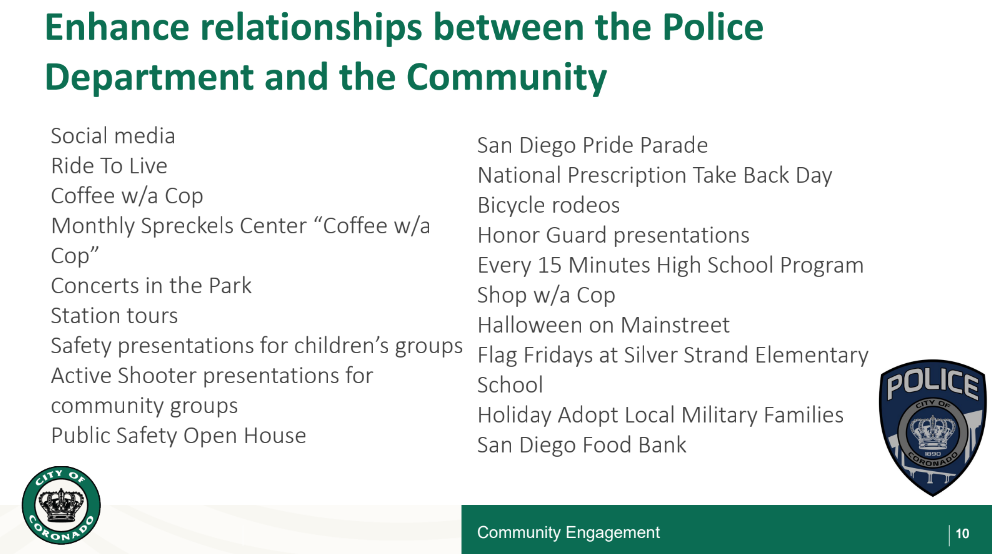 Councilmembers expressed concerns over e-bike safety, especially for children and asked what could be done to help. Chief Kaye said that they are on the lookout and have increased the number of tickets and seized 10 bikes in the last month. City Manager Friend commented that the Mobility Commission is also looking into this issue and forming an interdisciplinary committee focusing on three major issues: enforcement, education, and engineering.

Senior Planner Jesse Brown gave a presentation on the Stake rooftop expansion at 1309 Orange Avenue. The original project was reviewed by DRC, and Blue Bridge Hospitality Principal David Spatafore made the requested changes and returned on several occasions but didn’t have a successful outcome with members being absent and other issues. Brown said that the proposed plans are consistent with the building’s designation as a role model building. Spatafore gave additional information, emphasizing that his project was entirely separate from the downstairs Blanco restaurant. He emphasized his investment as a long-time resident and business owner here, saying he needs the expansion to increase customers to cover his $25,000 monthly rent. He said that these enhancements will fix the current drainage issues, make structural updates, and make the cupola more usable and will get him an extended lease on the space. CHA president Dave Landon, Dave Gillingham, Chamber President Rena Clancy, and Alan Osmialowsky all expressed support of the project. The council unanimously approved this appeal, with Councilmember Sandke recused. 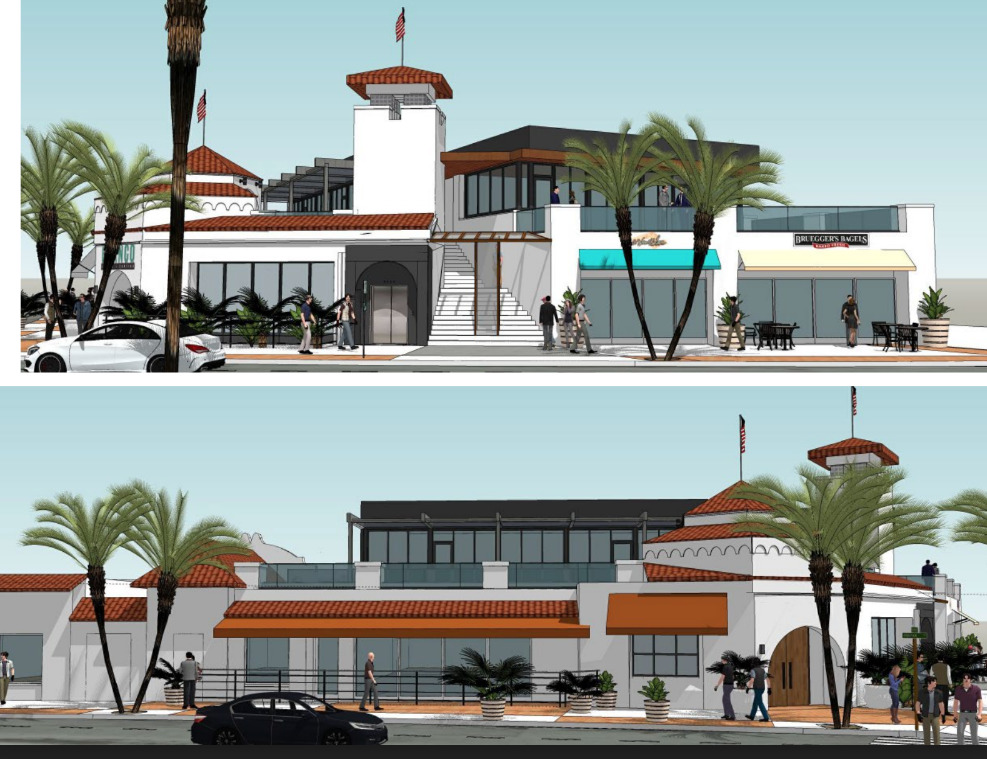 Community Development Director Rich Grunow introduced the final draft of the Sea Level Rise Vulnerability Assessment and Adaptation Plan, saying it has been an 18-month process to complete this two stage plan. It is critical to Coronado due to geography and differs from the Climate Action Plan, which focuses more on greenhouse gas emissions. This is not a regulatory document, but Coronado is the first in the region to complete this type of report, which was largely funded by a Caltrans grant. Grunow introduced Associate Planner Jane Thornton, who spearheaded this project and gave an excellent overview. The vulnerability report forecasts future sea level rise with potential impacts to facilities, infrastructure, private and public properties. The adaptation plan offers a menu of potential mitigation measures to minimize sea level rise impacts, which include conducting an inventory, studying selected sea level rise scenarios, with increments between 0.8 feet to 4.9 feet. Sea level rise maps show flooding would potentially come from the bay side. The assessment results highlight the most vulnerable areas including stormwater outlets, roadways, especially SR 75, and yacht clubs. 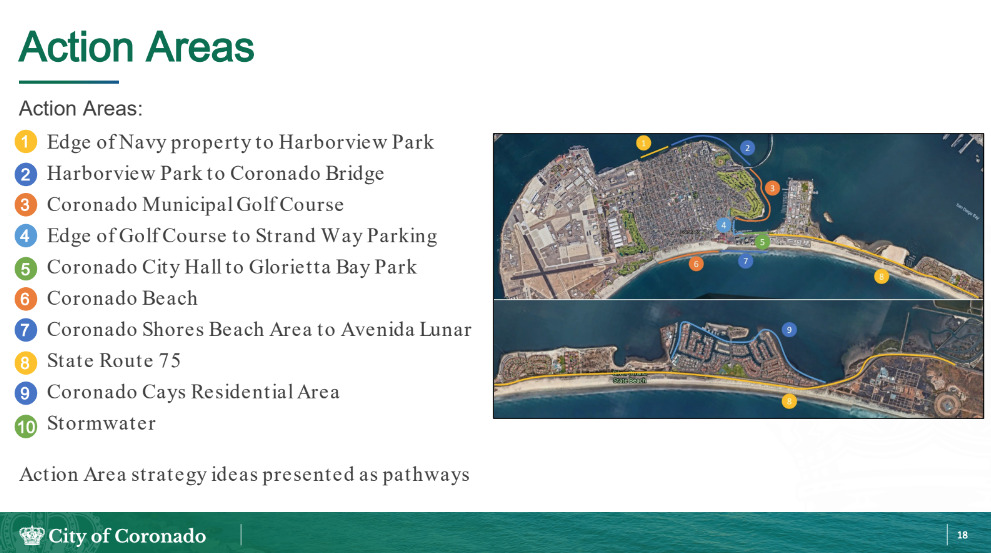 The adaptation plan emphasizes the importance of coordination with the Navy, Port, Caltrans, State Parks, and Imperial Beach, due to the fact the city only controls five percent of the coastline. City-wide strategies include adaptative management, engineering, operational components, planning, and public outreach. Thornton outlined that the comprehensive plan was finalized after input from three public meetings, various stakeholder meetings, and a public survey. For details visit the website at commentcoronado.org/sea-level-rise.  Future plans include yearly monitoring, with other actions involving developing sea level rise guidelines for city infrastructure, coordinating with emergency services, operational measures such as sandbagging, coordination with neighboring agencies, obtaining grants, and studying stormwater/groundwater. Other strategies are not triggered until 0.8 foot rise. Mayor Bailey asked how much sea level rise has occurred historically to which Thornton replied that it has risen 10 inches over the past 100 years. The council unanimously approved this Sea Level Rise Plan and asked for yearly updates.

Public Services Engineer Jim Newton gave an update on the Parker Pump Station. This project began back in 2018 and has changed in scope since the city purchased the property on the corner of Coronado Avenue and 8th Street. In March 2022, the city had 11 qualified bidders, from which they received three bids. The total cost of the project is $26.8 million, and is vital to the city’s infrastructure, as one of the largest of the 20 city-wide. It serves a couple hundred homes for sewage and acres of storm drains. Newton detailed that the old station was in such a state of disrepair that it could not be updated, and the best option was to replace it, but that is challenging because it goes three stories below ground, with a high groundwater table on a small site. When Councilmember Tanaka asked how to simply explain the need for this large expenditure to residents, he was told that the existing one was falling apart, and failure would be devastating, essentially taking the country club area back to a third world status without sewage services as Friend pointed out. This pump station will set the city up for generations, with the added bonus of an additional 6,000 feet of community green space on the site.

Administrative Services Director John Kim said that costs to date total $11.4 million, with $15.3 million balance remaining. To continue to move the project forward, the Fund 160 CDA Loan Fund, with a current balance of $25 million, has been identified, but this is a placeholder to give the city time to evaluate other options and identify the best funding source. Councilmember Donovan asked how that will affect the undergrounding projects, which are slated to come from that fund, and Director of Public Services and Engineering Leon Firsht said that the $10 million Silver Strand project, and Adella/Ynez project are in the design phase and won’t start construction until late 2023, with the First Avenue project potentially in 2024, so there would be no issue. Potential funding has been identified from Fund 100 General Fund, Fund 436 Major Facilities Replacement Fund, Fund 510 Wastewater Fund, and other external financing and grants. The council unanimously approved moving forward on this vital project.

Councilmembers Heinze and Donovan asked for a Policy 9 request to reconsider the Blanco appeal approval. The council received a last minute letter from Sam Fox saying that he would be willing to keep the arch as is and not bring it back to council. The council members heard from residents that they didn’t feel like people had the opportunity to voice their opinions because the meeting was so lengthy, and some were told that the item would be continued, so they decided to go ahead and have the project brought back to a future meeting to allow for community input. Councilmember Sandke was recused, and this motion was approved with Mayor Bailey voting no, because he felt it was prohibited in the municipal code and could have litigious implications.

On the Consent Calendar, the council approved Councilmember Sandke’s Policy #2 request to address Coronado’s allocation of California Transportation Funding for commuter Ferry Service. They also appointed new member Sharon Hall and reappointed Karen Strouse to the Library Board of Trustees for three-year terms until August 31, 2025.

Councilmember Sandke mentioned that he will be attending a meeting on August 18 where Mexico and the EPA will sign an agreement to proceed with the long-term projects to resolve the ongoing border sewage problems. The Consulate has indicated that repairs have been completed for the short term on the most recent sewage pipe breakage.