The City of Coronado provided its comments on a draft environmental impact statement (EIS) addressing a set of proposed projects to reduce transborder water pollution. The deadline for comments was Aug. 1. 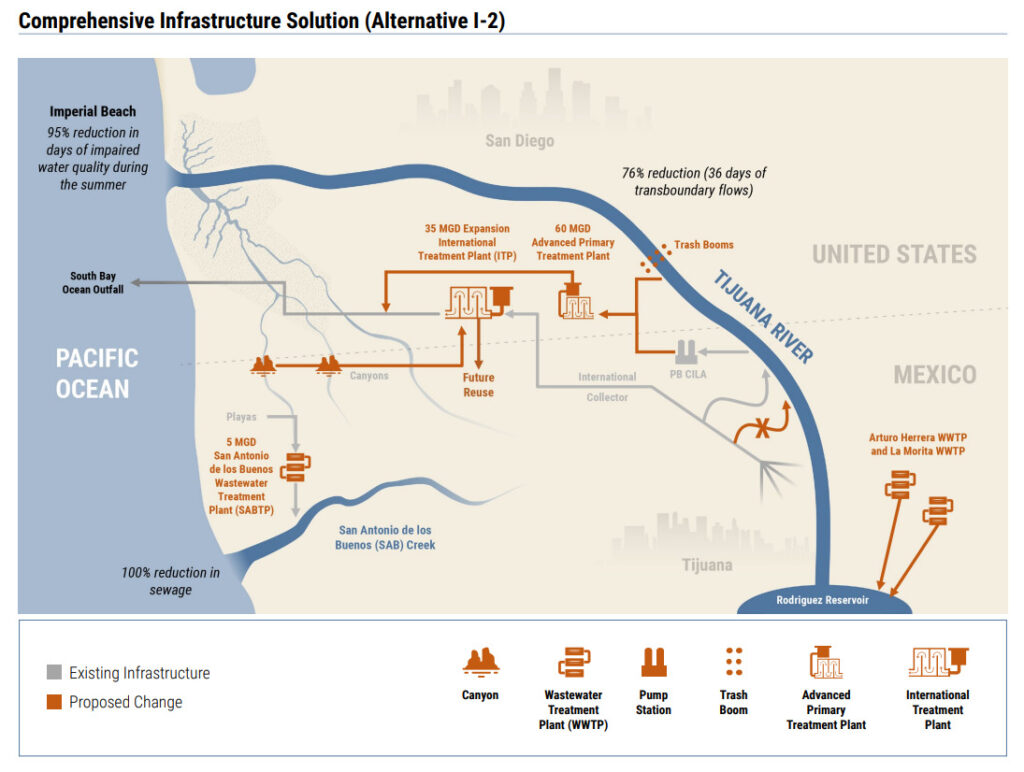 The City sent its strong support for Alternative 2, which is the comprehensive solution covering $627 million worth of projects. Alternative 2 includes a complete upgrade to Tijuana’s San Antonio de Los Buenos wastewater treatment plant along Tijuana’s coast. The Environmental Protection Agency (EPA) and U.S. Section of the International Boundary and Water Commission (IBWC) are the lead agencies on the project, which proposes to fund and implement the measures to reduce transboundary flows from Tijuana.

There are two primary sources of cross border water pollution. First, the Tijuana River carries treated and untreated wastewater, trash, and sediment from Mexico across the border, mostly during rain events in the winter. Next, polluted discharge into the Pacific Ocean from Tijuana’s wastewater treatment plant six miles from the border is carried northward by ocean currents during the summer.

The draft EIS document is part of the environmental review process required as the next step to move forward on the infrastructure actions announced by the EPA last November. Once complete, planning, design, and construction of some of the comprehensive set of infrastructure projects in San Diego and Tijuana can begin. In 2020, the U.S. government, through EPA, committed $300 million to the project.

The City continues to strongly advocate for funding for the comprehensive set of projects, which will require another $300 million. Senior officials at EPA and other U.S. agencies are engaging with counterpart agencies in Mexico to prioritize construction projects and explore cost sharing options for capital and operation and maintenance costs. Among other projects in Alternative 2 are expanding the existing South Bay International Treatment Plant, conveying flows from canyons in Tijuana to the San Diego plant, installing trash booms in the Tijuana River and rerouting treated water in Mexico for reuse.

There has been some confusion as to plans to rebuild the new Tijuana wastewater treatment plant. Some people believe that it will result in more raw sewage being released into the ocean. In actuality, the plant is inadequate and has been releasing raw sewage into the ocean for some time. A new plant will treat the raw sewage, and this treated water, not raw sewage, will be released offshore.