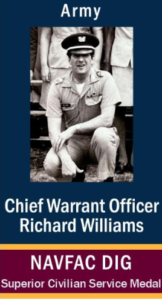 Chief Warrant Officer Richard Lee Williams was born November 13, 1935, in Perry Point, Maryland. The oldest of six siblings, he started his working career as a paperboy. In 1945, while hawking “War Ends”-headlined newspapers for 3 cents, he was excited to get a nickel.

Richard Williams’ unique experience combines 44 years of service to the military for both the Army and the Navy. He was drafted in 1958 and reported to the 714th Transportation Battalion, Railway Operating, Steam & Diesel Electric at Fort Eustis, Virginia. When the Battalion adjutant asked Williams to volunteer to be a clerk, he declined, saying he wanted to work on the railroad. He was immediately assigned to the track maintenance gang carrying railroad ties. A few weeks later, Williams reconsidered and became BN clerk.

As a recent college graduate, Williams became a criminal investigator with the IRS serving on the team investigating Spiro Agnew’s fraud. His Army reserve career continued with the 344th Data Processing Unit and the 55th Materiel Management Command. In 1980, Chief Warrant Officer 3 Williams retired from the Army.

An avid runner for 45 years, Williams and his wife Kitt met at a road race. They moved to Coronado in 2007. He has supported his community as a Coronado Historical Association docent, an officer in Silver Strand Chapter of Military Officers Association of America, and inspires the community by regularly running road races, often placing first in his age group. Williams runs Coronado streets daily, reminding us that personal fitness is important at any age.