In a disappointing turn of events, Coronado, along with three other cities, recently lost a legal battle over the new required Regional Housing Needs Assessment (RHNA) numbers that were mandated by San Diego Regional Association of Governments (SANDAG). Other cities involved in the lawsuit include Imperial Beach, Lemon Grove, and Solana Beach. Attorneys for the case argued that smaller cities like these had less of a voice than larger cities, with the SANDAG’s board of directors relying on the weighted vote for each city. Mayor Bailey said that the SANDAG board initially voted in favor of Coronado’s appeal on a 15-4 tally vote. But the weighted vote was then called and allowed the four cities of San Diego, Chula Vista, Encinitas, and National City to deny the appeal. The system allows member jurisdictions to cast votes based on their respective populations, rather than a “tally vote” in which each member jurisdiction has a single, evenly-weighted vote. SANDAG argued that only state lawmakers could change the law, and the courts didn’t have the authority to overturn RHNA.

After the verdict, Mayor Bailey commented that in 2011 when the proposed RHNA assessment was 50 units, Coronado zoning allowed for approximately 600 units, of which 350 were constructed, leaving room for 250 new net units. He said, “This RHNA cycle, we are required to allow for more than 900 units. Our zoning does not allow for that many new units, so we would have to change our zoning if that RHNA number holds.” 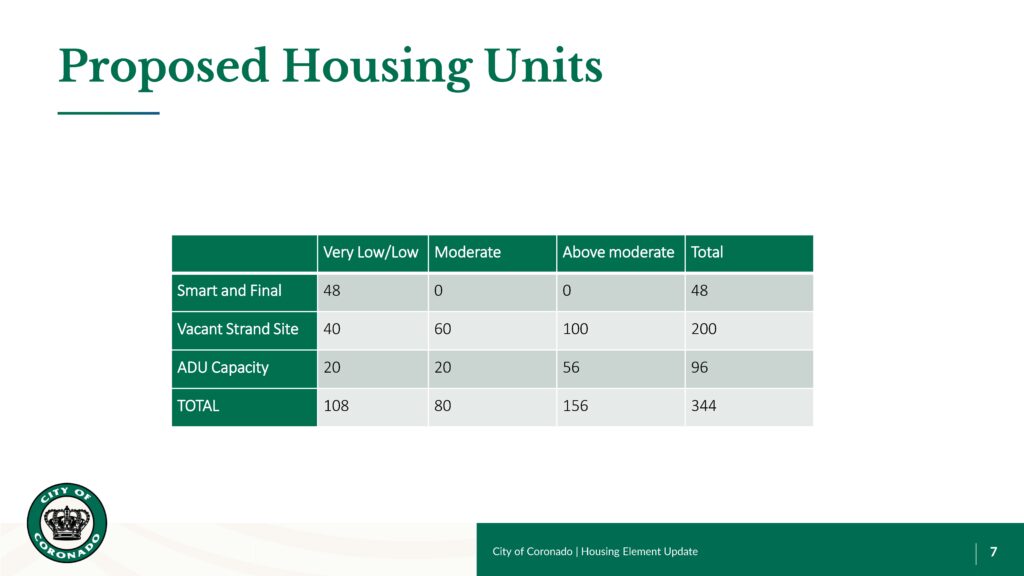 In 2021, in response to the required 912 new dwelling units mandated by SANDAG, Coronado put together a plan on what could realistically be built in Coronado. The plan proposed 344 new residential units through ADU development, as well as housing on two sites. The first is the 2.4 acre Smart & Final site, located at 150 B Avenue, where 48 units are proposed. The second is the 39 acre vacant Strand site for 200 total units, with an additional 96 units coming from ADUs. At the July 21, 2021 council meeting where this plan was approved, Councilmember Heinze stated that he felt that the city has “done its best to comply with goals, while being reasonable for the city.”  Mayor Bailey noted, “This is the best of no good options.”

When asked about the Navy component of the RHNA calculations, the City of Coronado responded: The RHNA formula used by SANDAG resulted in Coronado being responsible for providing housing for all active duty and civilian employees who work at NASNI, even those who are required to live on base in military housing and those who are at sea most of the year. Unfortunately, neither SANDAG nor the State Department of Housing and Community Development would allow the City to take ‘credit’ for any new housing built by the Navy on federal properties (such as the big military housing project proposed for Old Town).

The affordable housing requirement for Imperial Beach jumped from 254 to 1,375 in the new mandate. Lemon Grove’s numbers went from 309 to 1,359 new affordable units, and Solana Beach saw their mandate escalate from 340 to 875 affordable units.  With the verdict of the appellate court, the four cities’ case was dismissed. Going forward, lawyers for the case say they are exploring all of their options.

In January 2020, the San Diego Association of Governments distributed its allocation of planned housing units under the regional housing needs allocation to Coronado and other San Diego County cities. Coronado was assigned a stunning 1,001 new housing units, up 2,000 percent from the previous cycles. Coronado notified SANDAG of its intention to appeal, a process that provided Coronado 10 minutes to make its case. The City prepared an eight-minute video to explain its position. SANDAG voted 14 to 5 to grant the appeal. However, due to provisions of state law, the city of San Diego called for a vote based on the populations of all jurisdictions. The five jurisdictions that voted against Coronado won by 55% in the weighted vote, which overturned the previous vote and denied the appeals. Here is Coronado’s appeal video.