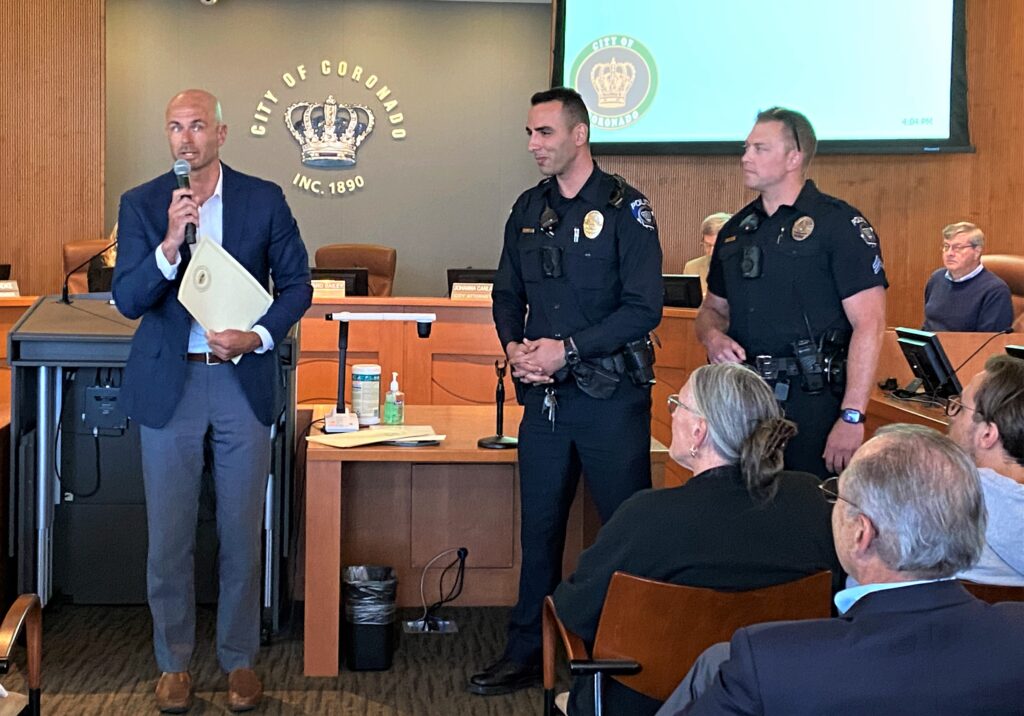 It was a meeting filled with honorary proclamations and a packed audience of tennis and pickleball players at the May 3 Coronado City Council meeting. Councilmember Sandke was absent from this meeting.

The first of four ceremonial proclamations started with Mayor Bailey honoring Peace Officers’ Memorial Day, by giving a proclamation to Corporal Sam Sellers and Officer Mahood Al Ghanimi. May 15 has been designated as Peace Officers’ Memorial Day by Congress and the President of the U.S. to honor the fallen men and women of law enforcement who have given the ultimate sacrifice in the line of duty; and to recognize the hazardous work and serious responsibilities of our nation’s peace officers. A memorial ceremony was held on May 4, 2022 at the San Diego County Administration Center. The City of Coronado respectfully pays tribute to and remembers the sacrifice of Lt. Frank Greene, killed in the line of duty October 12, 1954. 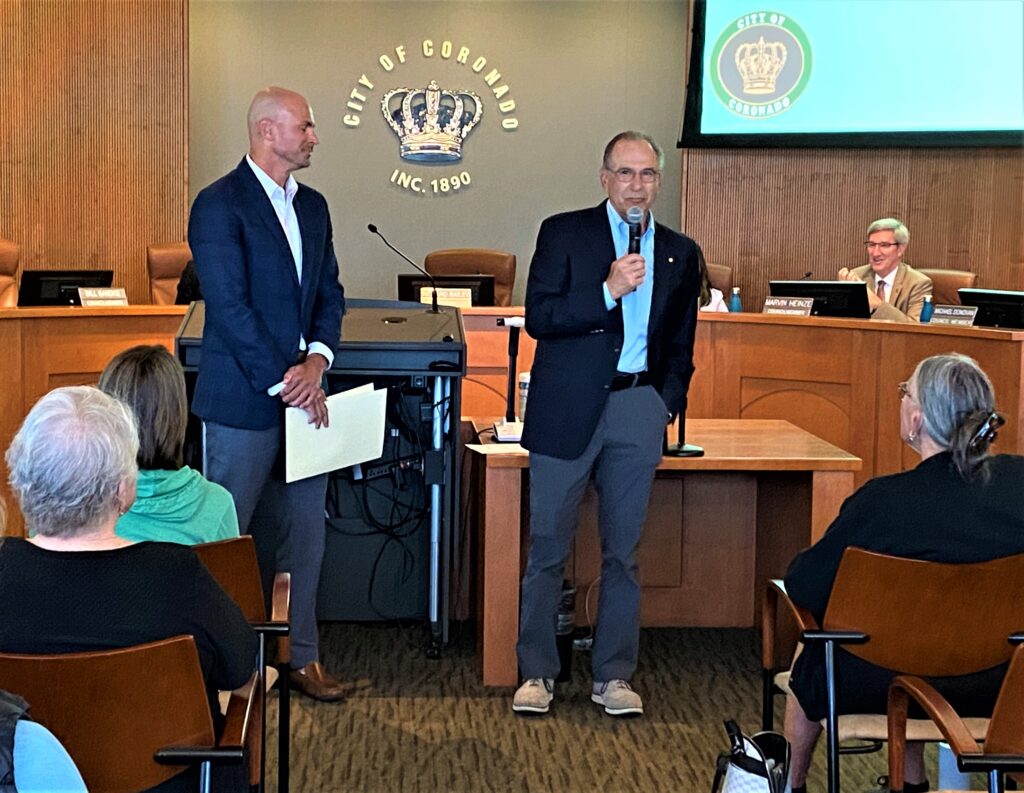 Bikes are one of the most prolific means of transportation here in Coronado and May is National Bike Month. City Manager Tina Friend gave a brief introduction and showed a clip for the historical bike film Along for the Ride, which shows a century of biking in Coronado. The movie will be shown on May 10, as part of CHA’s Wine and Lecture Series. Mayor Bailey noted that it was the best introduction for a proclamation, which he gave to Mobility Commission Chair Howard Somers. May 20 is National Bike to School Day, and SANDAG Bike to Work Day is May 19. The San Diego region has more than 1,700 miles of bikeways that are enjoyed by residents and visitors alike. Somers thanked the Police Department for their recent bike rodeos, and said they will be addressing bike safety for high schoolers, e-bikes, and making bike parking more accessible on Orange Avenue. 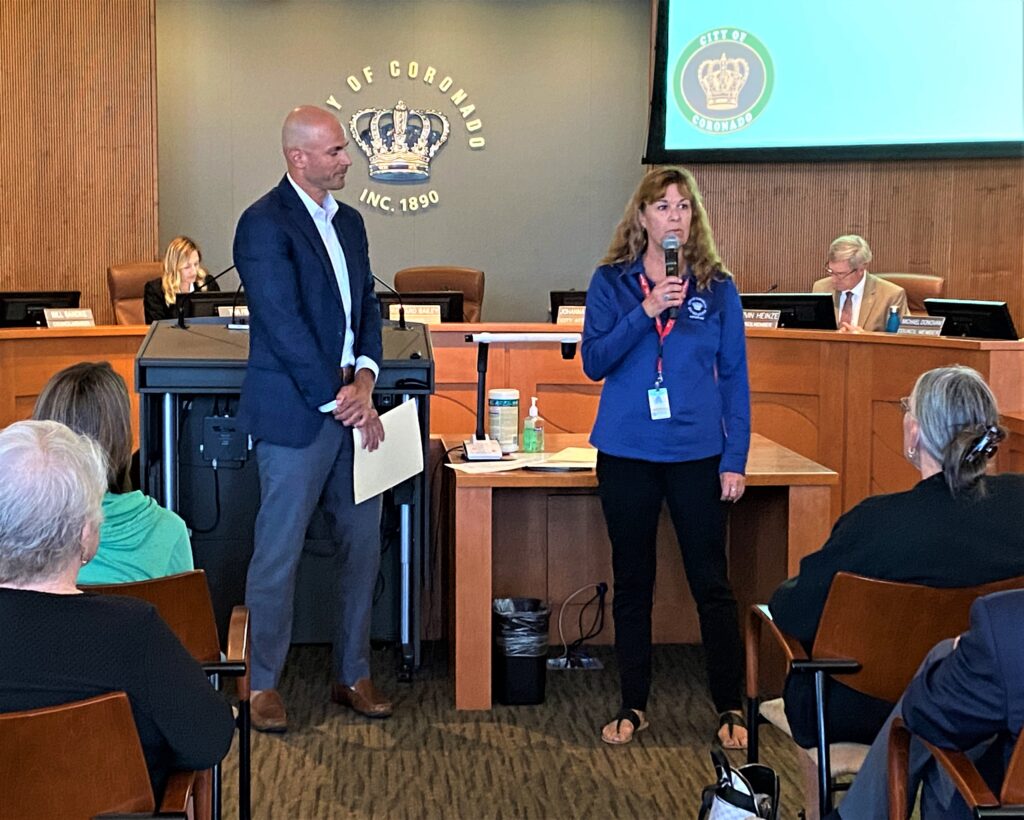 Aquatics Supervisor Becky Jackman accepted a proclamation from Mayor Bailey for Drowning Prevention Month. The Center for Disease Control and Prevention released the 2020 drowning death figures, finding that drowning is the leading cause of unintentional injury and death in the nation for children ages one to four, and second leading case for children ages one to fourteen. Most drownings happen in residential pools and can be prevented by using “layers of protection” including adult supervision, barriers such as isolation fencing and self-latching gates, approved pool safety covers, exit alarms and self-latching devices on access doors, swimming pool alarms, knowledge of how to react in an emergency, including CPR, along with learning how to swim and water safety education. 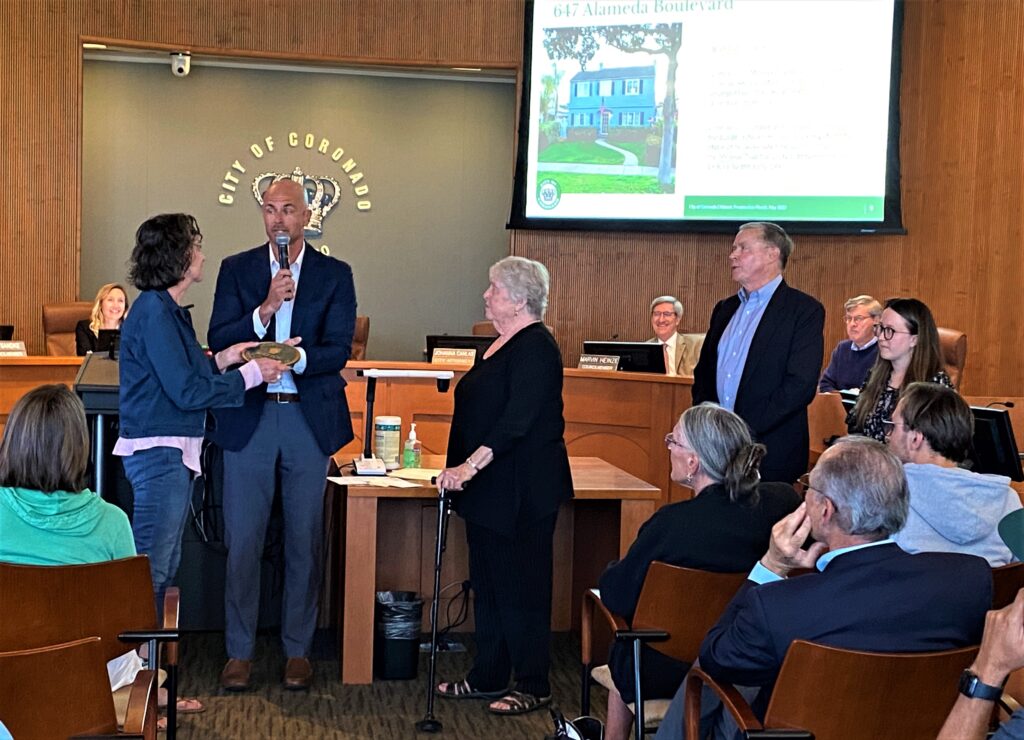 Next up was the big topic of the evening – the review of tennis and pickleball court usage data and the 2022 community survey results led by City Manager Tina Friend. She noted that this started out as a simple resurfacing project which was sent out to bid in July 2021 and awarded in November 2021. Those bids were rejected and it will now be rescoped on a much larger scale. She outlined that the usage data was not available prior to June 2021, and said actual usage was not known due to drop-in usage, reservations outside the system, and use of external facilities.

Friend outlined that the City of Coronado operates and maintains 15 USTA standard doubles size tennis courts with a current configuration that provides 14 tennis courts and four temporary pickleball courts. The eight courts at the Glorietta Bay Tennis Center and two at the library are used exclusively for tennis. CHS also has four tennis courts, with some availability when not used for school programming. Cays Park has four tennis courts and four converted pickleball courts. Cays Park court #1 is a “soft top” cushioned court, but its degraded condition reduces the quality of play, and the court is considered less desirable. Options for pickleball play also include three indoor courts at the Community Center on Thursdays, from noon to 3 pm., and the Coronado Island Marriott Resort has eight courts.

In collaboration with the Coronado Tennis Association (CTA) and the new Pickleball Coronado Association (PCA) with 500 members, the city conducted a community survey from March 4 to 18, with seven multiple choice and seven open ended questions, and 726 responses were received. A brief summary of the survey results include:

The city received 10 letters from residents prior to the meeting and 20 people addressed the council during the public comment period.  The pickleball players were easily identified by pink round stickers, but many of the speakers played both sports. Several speakers pointed out that pickleball is the fastest growing sport in the U.S., but it was also noted that during the pandemic both tennis and pickleball have seen a substantial increase in players. Everyone seemed to be seeking an equitable solution and commended the city on allowing input. This enthusiastic group applauded after each speaker.

The city’s short-term recommendations were to resurface Cays Park court #1 with a traditional surface, not like the current soft top, and surface and convert Cays Park court #5 to four permanent pickleball courts with dedicated lines, rather than tape and movable nets. Additional ideas included using high school courts as an added alternative, and outreach to Marriott for public/private collaboration on pickleball court access preservation.  Long term suggestions were to include more tennis and pickleball amenities, and potential configurations and enhancements in the Cays Park Master Plan process.

During council discussion, the mayor said that the resurfacing is long overdue, and that everyone is in favor of dedicated courts, but there is limited space. Councilmember Tanaka pointed out the inefficient use of space at Cays Park, e.g. the rarely used horseshoe pit and basketball court, and suggested asking VDLA, the landscape architect who is designing options for the entire Cays Park remodel, to come up with options. He was not initially in favor of giving public money to the Marriott for a collaboration. Everyone agreed that the corner by the tennis courts at Cays Park could be better utilized. Councilmember Heinze made a plea to leave the basketball hoops, while allowing for pickleball play, if possible. It was pointed out that the two tennis courts at the library could not be converted to pickleball courts due to high school CIF sports rules, and also the noise factor affecting the surrounding neighborhood will be further reviewed.

The council agreed that both short and long-term options should be considered and unanimously, with Sandke absent, voted to support the mayor’s motion of converting one existing tennis court in the Cays to four dedicated pickleball courts, convert the basketball court to pickleball play as a short term solution, with one court to include lighting, and additional lighting will be explored during the upcoming budget discussions. VDLA will also be asked to make the best use of space in the “triangle” near the tennis courts and a partnership will be pursued with the Marriott. He also asked for improved amenities for the Cays and Glorietta Tennis Center to be explored.

There were two public hearings brought before the council by Associate Planner Marissa Smith. The first was regarding 845 G Avenue, to approve a tentative parcel map to allow for condominium ownership of four residential units. The second was the same proposal to allow for condominium ownership of four residential units at 756 F Avenue. Smith noted the trees that would be saved in both projects during demolition and Councilmember Heinze thanked her for the diligent preservation of trees. Councilmember Donovan provided background noting that people may question why the council is approving putting four houses in the place of one, but this meets zoning standards, and it is a “zero-sum game” where the additional houses would have to be made up elsewhere, and there is nothing city government can do. He also noted that this is different for historic homes. These two projects were unanimously approved, with Councilmember Sandke absent.