The Coronado Woman’s Club was honored for celebrating 75 years of service with a proclamation by Mayor Bailey at the May 15 City Council meeting. Coronado Woman’s Club President Betsy Vernetti, Carrie Downey, and Alexia Palacios-Peters were on hand to accept the award. The club has donated more than $1.25 million to charitable causes including Concerts in the Park, 4th of July Parade, Coronado Library, Coronado Hospital Foundation, Coronado Middle School, Silver Strand and Village Elementary Schools, and many other organizations. The members have also provided hundreds of thousands of volunteer hours to the community through projects such as chairing and staffing the growing plant section at the annual Coronado Flower Show and cooking meals and serving the women at Rachel’s House, a homeless women’s shelter in San Diego.

The 2022 Legislative Policy Guidelines were presented via phone by David Jones and Kyra Ross from Coronado’s state lobbyist, Emanuels Jones & Associates. Jones said the good news is that there is an estimated $30 billion surplus in state funds, mostly coming from capital gains. Big issues include gas tax inflation adjustments and payment to car owners for gas relief, noting that the gas tax relief didn’t pass this week, but they are hopeful for the near future.  Another priority is the Care Courts for the severely mentally ill homeless population, with an estimated 8,000 to 10,000 in the state, needing more significant care than conservatorship.

Ross said that “this is the heat of the legislative session,” and 4,400 bills have been introduced in the last two years, with no major housing/land use bills proposed this year. She mentioned some of the new bills, some which are reruns of previous bills, including SB 897, which changes the current ADU height of 16 feet to 25 feet; AB 2097 prohibits local governments from enforcing parking on developments located near public transit; SB 932 requires changes to the General Plan to address bike and pedestrian safety; and SB 1466 would provide property tax increment financing to local government for affordable housing, infrastructure, and revitalization projects. She also noted several other bills that increase retail theft limits, define public works, the continuation to use teleconferencing at meetings, and removing individuals for willfully interrupting a meeting.

Councilmember Heinze asked about how to track the progress of bills. He was told about the upcoming deadlines with budget asks set for April 15 and 30, with a May revision, then June 15 is the legislative deadline for budgets with May 6 and July 1 as policy deadlines, and July 1 also starts the new fiscal year, with August 31 ending the session. It was noted that SB 314 allows for outdoor dining for one year post the state of emergency by the governor.

With looming deadlines, it is important for the public to make their voice heard to their representatives either by calling, sending letters, or via website. Councilmember Donovan said that “the one size fits all from Sacramento is hurting small cities,” saying that we need to push for local control. City Manager Tina Friend said that by adopting this platform it gives pre-approval allowing for the ability to be nimble to move on crucial legislative issues. The council unanimously approved these guidelines, with the addition of alternative fuel for ferries and other transportation vessels as proposed by Councilmember Sandke.

The 2022 Mobility Commission’s Work Plan was presented by Chairman Howard Somers, M.D., and Vice Chairman Russell Boelhauf. They highlighted the recent etiquette signage stenciled on the Tidelands Promenade Bikeway and plan to study the effects. They noted their improved communication with city staff, the restored police department assistance at meetings, and the start of discussions on E-bike safety, which will be a big, ongoing project. Their energetic work plan includes a Traffic Calming Master Plan, Active Transportation Plan (ATP), a bicycle/pedestrian incident self-reporting system, E-bikes, ferry fare relief for locals, Bayshore Bikeway widening, year round shuttle or on-demand electric transportation services. The commission promotes bike education in the elementary and middle schools and would like to include the high school. Addressing bike parking in the Orange Avenue District, being involved in future slurry seal projects as related to bicycle marking and other intersection safety issues are also on their list of things to consider. Former Councilmember Carrie Downey suggested bussing kids from the Cays and Navy Housing to Village Schools, with some possible Navy funding. This Mobility Plan was unanimously approved, with the suggestion of incorporating bicycle/pedestrian incident reporting into Ask Coronado.

Community Development Director Rich Grunow presented the highlights of the final draft Climate Action Plan (CAP) which was started three years ago. He reviewed the framework, which includes comprehensive and an aspirational greenhouse gas (GHG) reduction plan, consistency with state goals, which are 40 percent of 1990 levels by 2030, a menu of options that include a variety of regulatory, incentive-based, and outreach/educational-based strategies, and strategies built on existing programs with new opportunities. He noted that most GHG emissions come from transportation, with energy consumption a close second, and said that the 2045 target has been deferred. Even though Coronado’s number is relatively small, at one-third of one percent, of emissions in the county, the council felt that it is important to the community to be environmentally friendly. The CAP identified 17 qualified strategies and 28 non-qualified supporting measures. 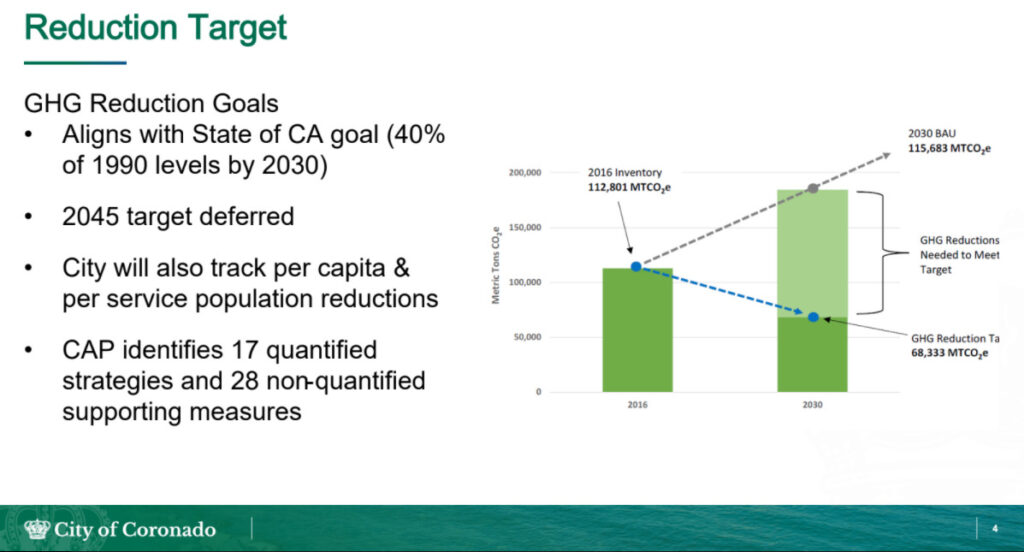 The city had conducted much community outreach on the CAP, including online engagement, four focus group meetings, three public workshops, five public hearings, stakeholder coordination meetings, and a public review comment period. Community members who spoke at the meeting included Abby Berk from the Citizens Advisory Group, who was disappointed the Community Choice Aggregation (CCA) energy choice was not stipulated. Emerald Keepers President Amy Steward said she was dissatisfied that the finalized CAP did not include changes requested by the public, and felt that Coronado has the capacity to do more, noting that Emerald Keepers wants to work with the city for more significant actions. Also from Emerald Keepers was Board Member Christina Slentz, who advocated for a Chief Resilience Officer, a new position in the city to oversee environmental issues. Former Councilmember Carrie Downey said there is a lack of electric vehicle charging stations but was told that The Del has 25 and there are several in the Cays and other areas. Several of the councilmembers advocated for seeing car charger data to determine the needed amount. Councilmembers did not favor the addition of a new Chief Resiliency Officer (City Manager Tina Friend said those duties can be done with current staff) and were open to a cost-benefit analysis of CCA, in which both Friend and City Attorney Johanna Canlas have experience.

Grunow said the keys to success would be working with regional partners and promoting robust public outreach strategies. The council unanimously approved the CAP, with the implementation plan to include further details and costs, with a CCA analysis for summer 2022.

Principal Engineer Jim Newton gave a brief presentation on a revised schedule for the Regional Transportation Congestion Improvement Program (RTCIP) fees designed to mitigate the impacts of development of residential units.  A two percent increase was approved by SANDAG in February, which would raise the new residence fees from $2635.50 to $2688.21, which is estimated to net Coronado an additional $120,000 this year. Councilmember Tanaka asked where those monies go and was told they are specified for roadway improvement maintenance. Coronado also receives $624,000 a year in TransNet funds, which are used for transportation projects.

Tim Rohan asked to have the rejection of the design-build project proposals for the Golf Course Water Recycling and Turf Care Facility Project pulled off the Consent Calendar for discussion. He was told that the original estimated costs for the project were $35 to $40 million, but the seven submissions came in at the $61 to $80 million range. Although the project will not move forward at this time based on the cost of the project, City Manager Tina Friend said it will stay on the Capital Improvement Projects list.