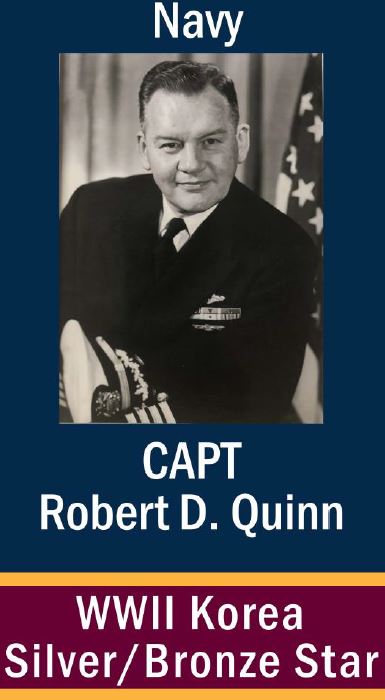 CAPT Robert D. Quinn, sometimes known as “Red” due to his auburn hair, graduated from the Naval Academy in 1940 and earned his dolphin pin, becoming a full-fledged member of the Navy’s submarine service. During his naval career, he commanded five separate vessels, two submarines and three surface ships.

While aboard USS Tunny in 1946, Lt. Cmdr. Quinn was awarded the Silver Star for his ability to penetrate strong anti-submarine barriers to complete a special mission in the southeast section of the Japan Sea despite severe enemy countermeasures. Subsequently, he was awarded the Bronze Star while commanding USS Perch during the Korean Conflict. In September 1950, Perch transported a force of British Commandos in a raid on a train tunnel which had been serving as a primary North-South supply line. He was the only submarine commander to be awarded a combat medal during the Korean Conflict.

Subsequently, Commander Quinn commanded USS Bordelon, a destroyer; USS Rigel, a supply ship and, most notably, USS Newport News, a heavy cruiser. The Newport News was one of the last remaining teak decks that still required holystoning and the very last all-gun heavy cruiser in naval history. This served as his major command and he was rightly proud of the ship and crew. One of his crew later wrote “I recall the Newport News as a meticulously maintained vessel with all bright work highly polished, lifelines of pure white, covers in place on all gun muzzles and decks that you could eat off.”

While on active duty, CAPT Quinn attended Harvard University where he obtained a master’s degree in business from the famous “B” school where he later served as an associate director of alumni programs as his first job after retirement. It was during this time that his daughter, Kay Quinn Krohne, joined the Navy and later retired as a Navy commander.

His son-in-law, Ted Krohne also graduated from the Naval Academy and completed his Navy career as a naval aviator and commanding officer. Both of his grandsons, Kris and Karl Krohne, served honorably as members of the naval service.