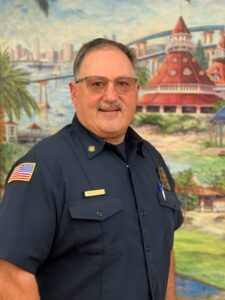 Former Coronado Fire Chief Mike Blood, who has been serving in an interim capacity since July, has been permanently appointed to the position, City Manager Tina Friend announced today.

Blood, who served Coronado for 28 years in all ranks of the organization, retired as Coronado’s fire chief in October 2017. He will return to active employment on Nov. 1.

“Chief Blood is a dedicated and skilled leader and is the right fit to lead Coronado’s Fire Department,” Friend said. “His decades of experience in Coronado make him uniquely in touch with our community’s needs and how to best deliver the high level of service our residents have come to expect. We welcome his return.”

Although a professional search had been initiated to identify a permanent replacement following the retirement of former Fire Chief Jim Lydon, Friend said it was clear that Blood was the right person for the job, and he agreed to return.

“I plan to maintain the current excellent customer service the Fire Department provides to the community,” Blood said. “I have an open-door policy and invite anyone to drop by to discuss any issue or ask any questions they may have.”

As Fire Chief, Blood will oversee a department of 41 full time employees from both Fire Services and the Beach Lifeguard Division, with up to 50 seasonal or part-time lifeguards. Blood will manage Coronado’s Disaster Preparedness, which includes the City’s Emergency Operations Center and the coordination of public education through the CERT/CERO and CPR programs.

Blood worked for more than 30 years in fire services, including 14 in a leadership position. He was named fire chief in 2011. Prior to his position as chief, Blood served as a division chief primarily responsible for operations and training. He also served as fire captain, fire engineer and a firefighter, starting in 1989.

Previously, Blood was a director at San Miguel Consolidated Fire Protection District. He was part of an Urban Search and Rescue team deployed to the World Trade Center just after 9/11, where he worked rescue and recovery at the site for 10 days.

Over the years, Blood has helped battle numerous fires in Coronado as well as around San Diego County, such as on the Cedar Fire in 2003. He was instrumental in working with Project Heart Beat to get automated external defibrillators, or AEDs, placed in every public facility in Coronado.

Blood and his wife, Cindy, have two children, a son who is a San Diego Firefighter and a daughter attending college working toward a criminal justice degree.