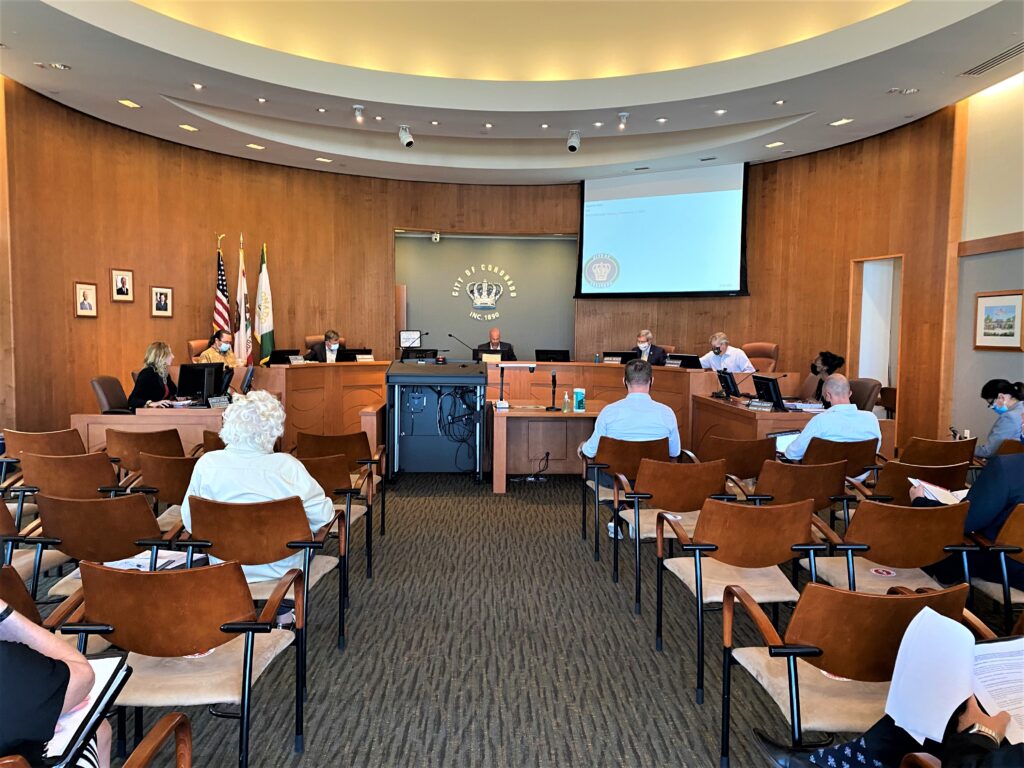 Extending the restaurant outdoor seating program was the first topic discussed at the City Council meeting on September 7. After a brief presentation by Community Development Director Rich Grunow regarding the staff proposal for an extension through December 31, 2021, Chamber of Commerce outgoing Executive Director Sue Gillingham and New Executive Director Rena Clancy both spoke advocating for a longer extension period, potentially through September 2022, citing the considerable equipment investments that restaurants have made. Also noted was that people like dining outdoors and feel safer doing so even more due to the pandemic, and hotels are still seeing groups cancel through the spring of 2022. The city of San Diego has extended their outdoor dining through July 2022. Council had a lengthy discussion regarding the extension time period and if there were any Coastal Commission implications and it was determined they are lenient during a state of emergency. Ultimately, they unanimously approved a six-month extension through March 31, 2022, and temporarily suspended the city’s non-confirming use restrictions, such as parking requirements. They also directed staff to make sure restaurants were following the guidelines for outdoor dining and work with the Chamber of Commerce to get input and come back with future proposals.

The Climate Action Plan (CAP), which is ready to be released for public comment, was also presented by Grunow, as an aspirational, incentive-based document. The plan outlines greenhouse gas (GHG) emission strategies the city may take in the future with no mandates at this time for the city, residents, or businesses. It takes into account Coronado’s ongoing sustainability efforts, as well as the city’s emissions and reduction strategies, excluding the Navy or Port of San Diego. The document was put together after city staff conducted a community survey, four focus groups with builders, business owners, and environmental interests, stakeholder meetings, public workshops, and five public hearings. Four community members, Climate Advisory Group member Abby Berk, Amy Steward and Christina Slentz from Emerald Keepers, and master composter Laura Wilkinson, all gave input via zoom, indicating they would like the CAP to have a stronger plan of action with implementation goals and effectiveness measurements. They would like it to be more in line with the U.S. goal to reach 100 percent carbon pollution-free electricity by 2035, with net zero emissions by 2045. There were questions about offering a Community Choice Aggregation (CCA) as an energy option, and Councilmember Tanaka requested further discussion at a later date. All the councilmembers felt that the city is moving in the right direction and unanimously approved the CAP draft. Mayor Bailey commented, “This is a roadmap we can start to follow.” Public comments are welcome for 60 days (until Nov. 8) at https://commentcoronado.org/climate-action-plan. After public comments are closed in November, staff will revise the draft and bring it back for final approval. 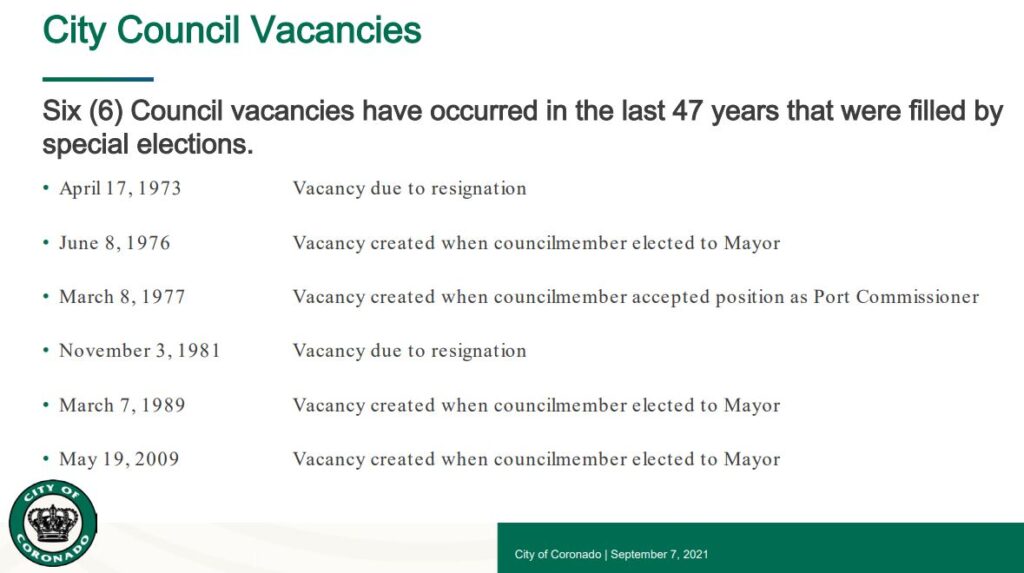 City Attorney Johanna Canlas gave a presentation on the Coronado Municipal Code regarding filling vacancies on the City Council. She highlighted that in the past 47 years only six vacancies have occurred, with all being filled by special election. With the current ordinance, vacancies can be filled by appointment once the seat is vacated, until a special election can be held. Without an ordinance, the city would default to California state law, which says that seats can be filled by appointments or special elections, depending on the timing of the vacancy. The last special election here in 2009 cost $12,583, but Canlas noted that it was consolidated with a statewide election, so shared costs made it much less expensive. City Clerk Jennifer Ekblad pointed out that current special election cost estimates from the Registrar of Voters are approximately $150,000 to $250,000, based on the 11,534 active registered voters in Coronado. She noted costs of other special elections, for example in 2017, Poway spent $408,000, with 29,335 registered voters, which included in person voting; and Solana Beach spent $182,000 in May 2019, with 9,174 registered voters. Councilmember Donovan asked how many other cities defer to state laws on this issue to which Ekblad said that most in San Diego do. Mayor Bailey pointed out that state law offers the flexibility to call or not call for special elections or appointments. Councilmember Sandke said that depending on the timing of a vacated position, under current code, the city would be required to hold a special election, even if only a month was left on the term, costing the city upwards of $150,000. Councilmember Donovan made the motion to repeal the local ordinance and defer to state law with Councilmember Heinze seconding it and it was unanimously approved, with Councilmember Tanaka stating that he would rather leave the municipal code alone but would vote with the group. Canlas will bring back an updated ordinance at a future meeting. 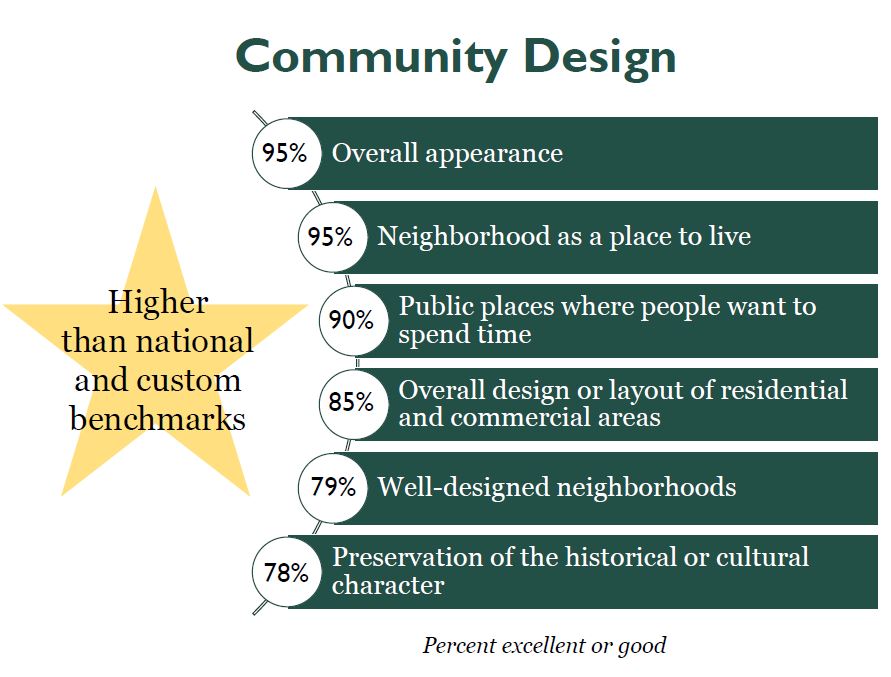 Senior Management Analyst Janine Zúñiga gave background on the 2021 National Community Survey, citing that the first one was performed in 2003, with follow-ups in 2011 and 2014. She introduced Polco Founder and CEO Nick Mastronardi, who presented the highlights of the survey which was conducted from March 25 to May 11, 2021. It was a multi-wave, multimodality survey, mailed to 2700 homes. There were 594 responses, approximately 24 percent, which he said was actually good, considering the average is now about 15 percent, with a decline in responses over the last five years. He stated that the results were statistically weighted to reflect Coronado overall. He noted that they conduct surveys in top performing cities in 43 states and he was impressed with Coronado’s results. Some highlights include 94 percent and above of residents like the quality of life in Coronado; local government ratings scored higher than the national average and improved by 10 percent; improved ratings for health and wellness were cited; with growth and density issues continuing to be a concern. To view detailed survey results, check out www.coronado.ca.us/government/about/citizen_satisfaction_survey.

We’d be remiss not to mention the impassioned plea from Julia Viera regarding saving the historic scored sidewalks that she grew up roller skating on throughout the village. She made the same appeal in July 2019 and was told that the city standard would be to require all new sidewalks be scored to match the historic look of the original ones. Viera recently came across some new sidewalks in the 900 block of F Avenue that were not scored and she was concerned. She was assured that all sidewalks will be saw cut to match the historical template and she considered this her 95th birthday present.