On his 100th birthday, WWII paratrooper Tom Rice will jump in his hometown of Coronado on the beach front of the historic Hotel del Coronado.

The Commemorative Air Force’s C-53 D-Day Doll will drop Rice for his centennial celebration. D-Day Doll flew missions on D-Day and has been restored and preserved to represent her role in the Allied invasion of Normandy. D-Day Doll crossed the Atlantic to participate in the 75th Anniversary of D-Day ceremonies that involved Tom Rice.

Former U.S. Navy SEAL Teams with “Beyond the Teams” (BTT) will be providing Drop Zone Security Detail. BTT is a non-profit organization dedicated to supporting worthy causes and events. This monumental event is presented by Operation Call-To-Service and will be hosted by the Hotel del Coronado. The event will take place on Sunday, August 15, 2021 from 10 am to 4 pm at the Hotel del Coronado Beach Front, 1500 Orange Avenue, Coronado; estimated jump time is 11 am. The event is sponsored by Seaborn Cocktails, Metarom Flavors, Coronado Cross-fit, Navy SEAL Xperience San Diego, and Praesidus watchmakers, the creators of Tom Rice’s “The Lost Watch of D-Day.”

At 22 years of age, Tom Rice volunteered to join the new and untested combat branch of the American Army and what he calls “The Airborne Experiment.” After rigorous and almost impossible training, Rice became a member of the most exclusive and demanding regiments of that time, the 501st Parachute Infantry Regiment (PIR) of the 101st Airborne Division, C Company, commanded by the legendary Colonel Howard “Jumpy” Johnson. Rice parachuted in Normandy on D-Day and Operation Market Garden in the Netherlands. He served in the Battle of the Bulge in Bastogne, Belgium and captured Hitler’s Eagle’s Nest in Berchtesgaden, Germany. After the war, Tom resumed his studies and later became a teacher. He taught high school and junior college social studies and history for over 44 years. 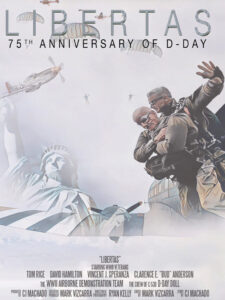 On June 5, 2019, at the age of 97, Tom Rice parachuted once again from a C-47 over Normandy to commemorate the 75th anniversary of D-Day, which is known as the largest historical re-enactment event of our lifetime and is documented in the film Libertas.

When Tom was asked what it was like to jump 75 years later, he responded, “My hope is the next generations will always remember the men who came and fought for them, many sacrificing their lives to liberate the world. May we never forget them.” Tom is dedicating his 100th birthday jump to the 101st Airborne Division and “The 4 Colonels of Carentan” in support of a monument being built in Normandy as a tribute to those who liberated Europe.

Come join us to wish Tom a happy 100th birthday and congratulate him on his epic jump!  WWII Honor Flight San Diego veterans and WWII “Screaming Eagle” Dan McBride (97), will be in attendance to celebrate.

Viewing the jump is free and open to the public. All attendees must comply with current California mandated COVID protocols.

To learn more about the event, visit:  www.OperationCall-To-Service.com

Terms and conditions:  The event organizers will not be held accountable for the flyover if it is canceled due to weather, mechanical issues and or unforeseen complications.

For Businesses who would like to support this monumental celebration, but can’t meet the sponsorship levels listed, please consider donating to the GoFundMe page. Every dollar counts! ALL DONATIONS collected will go to WWII Paratrooper Tom Rice’s 100th Birthday Jump and Centennial Celebration!!