Why the Tijuana Estuary Restoration Program Should be Reconsidered

Public Comment Tijuana Estuary Tidal Restoration Program (TETRP II Phase I)
Why should the South Bay public ask this plan to be Re-Submitted?

As a local resident who has some experience in environmental restoration projects, I must ask that this project be restudied and resubmitted to the public for review for the following reasons.

First, the Tijuana River National Estuarine Research Reserve (TRNERR) public outreach documentation is unreadable, lacks the proper scope of work and the project should have a more detailed maps which describe the work and the existing current conditions of the site ecology.

Second, the meeting materials on the links called Final Script only has verbiage with no slides so the public who would go to this website has no way to offer review drawings and conduct a proper consideration of this project because the drawings not there. Many of the public who would look at this (especially the elderly and first level computer users) out of frustration would stop searching and so this segment of the public cannot comment. At the first glance look of the TRNERR (TETRP II Phase I) website I did this and quickly did not look at again for a week.

Third, there is no documentation of the count of existing in mud species that would be permanently exterminated if this project is to go forward. Without this kind of front-end basic knowledge there is a high chance that this project would do more damage than good and dramatically eliminate the biodiversity of species of the Imperial Beach Slough. For example, this area is currently one of the extreme low flow tidal areas in the Slough and has been untouched by any grading or mechanical disturbance for the 100 years or more…. there are just no photos past 1922. But in 1922 it looked much as it does now.

Low flow areas have a different ecology than that exists at the mouth of the slough which has fresh seawater flushing action. In low flow areas you have purple Sea Slugs, bright neon yellow slugs, large, shelled snails, clams, leaf type seagrass, and other mud dwelling organisms who do not exist in the mouth of the Slough. Since this site has been most likely undisturbed it may contain many creatures that are desirable to retain. In management of public open space there are two types of lands: pristine habitat and compromised lands. Pristine habitat is Yellowstone/Yosemite and compromised lands are those lands that have been changed so much they no longer hold native species or resemble what naturally existed. 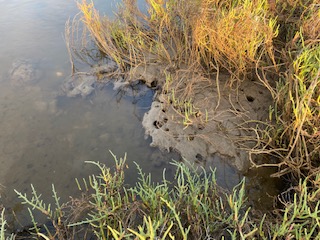 As a best management practice, you never touch Pristine Habitat because there is a 95 percent chance you will lose the biodiversity. Recently, scientific studies have been critical of river habit restoration in the United States and Europe. These studies review the results of hundreds of restoration projects and rep1ort there probably of success. In 2015, the findings were made public that in the United States over the last 20 years environmental restoration projects have about 90 percent chance to fail and reach their stated goals. The odds in fact are bleaker than that. Of the 78 river restoration projects examined “only two showed statistically significant increases in biodiversity”. That is only a 2.5 percent “success rate”.

There are three points here to be made. One is that if you destroy this pristine habitat with a rich area of biodiversity in the Tijuana Sloughs you have a 98 percent chance that you will be replacing it with dead zone of habitat that may never recover or will take decades to recover. Two is that this area because it may represent untouched “pristine” habitat it also serves as a nursery which constantly populates the surrounding compromised habitat with viable repopulation of native species. Third, why would we spend taxpayer’s money and risk the destruction of pristine habitat when the estuary has abundant compromised habitat to conduct these types of high-risk restoration experiments. 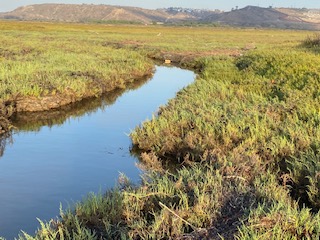 A recent example of this type of project that has this same type is the Oneonta Slough restoration project completed in 1997. In the 1960s and 1970s this slough had deep channels and each day the tide would rush in and out of this back bay area. Fish were abundant and a birds would dive and eat the surface smelt that would come in with the incoming tide. In the years following because of this restoration project the volume of water has been restricted and the outcome of the project is that the fish and the diving birds who would eat them no longer are present in this environment.

I ask that this project to be better documented and considered for another site or at a minimum this project be restudied and resubmitted to the public with more information and the other factors cited above.

Submitted by Jean SeagerPlease join in supporting a book drive to stock new Little Free Libraries, approved in this year’s budget by the Board...
Read more
Letters to the Editor

Submitted by Stuart H. Hurlbert It is good that the Times allowed Ms. Gillies to respond (Countering Opinion to “Get ADL Out of Coronado and...
Read more
Letters to the Editor

Submitted by InclusioNado Steering CommitteeGood morning everyone. My name is Marely Ramirez. I am a member of the InclusioNado steering committee. We thank you...
Read more