CHA’s annual Preservation Symposium, a partnership with Coronado MainStreet and the City of Coronado, was a successful capstone to the month-long celebration of National Preservation Month on Thursday, May 21.

As part of the Symposium program, the Coronado Historical Association announced the much-anticipated winner of the 2021 Going the Extra Mile (GEM) Award.

Dave Landon, President of the Coronado Historical Association, presented the award to Anne and Taylor Stockdale for their restoration of the Stockdale family home at 547 A Avenue. When presented the award, Anne and Taylor described the restoration work that they did to bring the home back to life and earn the GEM Award. Watch the video and read more below to learn about all of their hard work.

Each year, CHA’s Going the Extra Mile Committee considers historic homes and properties that have been nominated by CHA membership. GEM Award finalists must have completed a recent restoration or renovation project true to the historic character of the home by December 31 of the prior year. The GEM committee researches the history of each home and learns about the hard work behind each restoration before making its selections. This year’s nominees were all outstanding examples of Going the Extra Mile, and the decision was very difficult.

This Craftsman cottage was built in 1910 by builder E. Cameron. It was honored with a plaque from the Coronado Historical Association in August of 1988 as a “City Landmark.” The home was originally built for Fritz Nave at a cost of $5,000 and has six bedrooms, four bathrooms, and approximately 3380 square feet of floor space with a lot size of 7841 square feet. In 1935, the garage with a second-story apartment was constructed by the Depew Building Company and in 1972, its most notable residents, Admiral James Stockdale and Mrs. Sybil Stockdale added a library, bar, and a porch.

Fritz Nave owned the house for two years until he sold it to Mrs. C.C. Carpenter. In 1913, J.C. Healy purchased the property, and it remained in the Healy family until 1933 when it was sold to Capt. and Mrs. Thomas Shine. In May of 1963, James and Sybil Stockdale purchased the home from the Shines. In fact, it was during Jim’s deployment to the West Pacific in 1963 that Sybil bought the house on A Avenue. 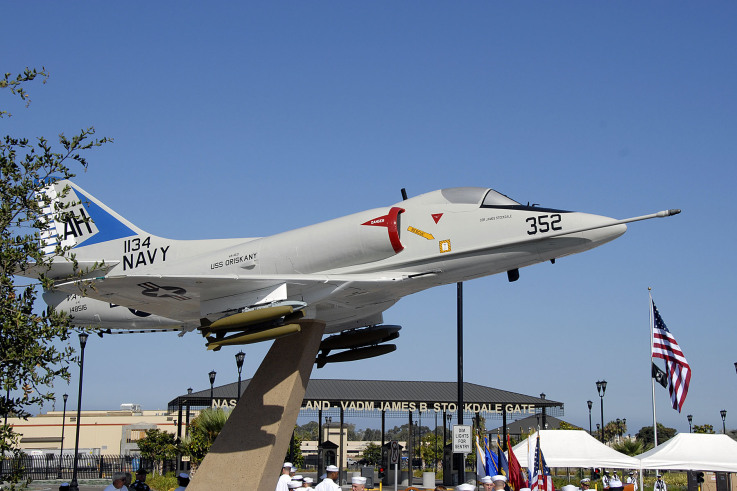 In 1964, Jim again deployed to West Pac as Commanding Officer of Fighter Squadron 51 aboard the aircraft carrier USS Ticonderoga leaving the family quietly settled at 547 A Avenue. Little did they know that he would not return to the home until 1973. Vice Admiral Stockdale was awarded our nation’s highest military award, the Medal of Honor, for his extraordinary heroism, conspicuous gallantry, and unparalleled leadership while serving as senior naval officer in the Prisoner of War camps of North Vietnam (1965 – 1973).

During this time, Sybil tirelessly organized and led a nationwide effort to focus attention upon, and publicize the plight of, the prisoners of war, demanding that the treatment of the POWs be improved. Her dynamic leadership and persistent efforts at home and abroad were a major factor in the betterment of conditions for all POWs imprisoned in Vietnam.

Upon his return home after being a POW during the Vietnam War in 1973, Rear Adm. Stockdale was assigned to head an aviation warfare command with an office at North Island Naval Air Station. At his insistence, he would fly out to the carriers and make landings. He was offered spacious quarters aboard North Island but declined so the family could stay in their beloved A Avenue home.

This beloved and well-lived-in home was in need of some love and lifting after Sybil Stockdale passed away at 90 years old on October 10, 2015. Taylor Stockdale, the youngest of the four Stockdale sons, and his wife Anne were gratefully able to keep the house in the family. The Stockdales engaged Jim Papenhausen to begin work to repair the foundation of the house. The old round rocks were literally crumbling, thus a new foundation was laid beneath the basement level accessed easily from the backyard.  Since the house is situated on the east side of A Avenue and set into the slope, the first floor is at street level and the basement is level to the backyard. In tearing out the lath and plaster walls, the old knob and tubing electrical wiring was damaged and in need of updating, as was the plumbing. Anne described peeking through the giant old cast iron pipes, “you could barely see light at the other end” due to the years of built-up calcification. Updated insulation for each of the walls was added as well; the original home had no insulation at all.

“We love the character of the home, from the built-ins to the beams to the 890 window panes,” the Stockdales declared. Therefore only small design changes were made; a doorway made a bit wider, bathrooms and kitchen updated, but the footprint and layout of the home remains. All new wood flooring was installed on the three levels of the home. Each of the 890 window panes were painstakingly cleaned, and the original weight and pulley system in several of the windows replaced to function properly.

As with any big project, roadblocks and challenges abound, but none was more perplexing than the accidental removal of the gas meter. Would you believe the crew had the wrong address? Unfortunately, the Stockdales discovered it is much easier to remove a meter than to put one back. Thus the long story took even longer to resolve, eight months in fact. Thanks to Anne’s attention, timing, and aplomb she noticed and engaged a SDG&E crew nearby who was installing a new gas line and put all the right people in contact to literally get the home fires burning again.

It is no surprise the renovation took two years, from replacing the crumbling foundation to opening up each wall and ceiling to update the mechanics of the house, to then have to replaster and skim all surfaces to match. The opened ceilings did reveal the large 4×8 redwood framework, which had literally held the house up all these years and protected it from termites. The very few termites found were in secondary woods where repairs to shingles might have been made over the years. The termites, it turned out, flocked to the playhouse Sybil had built for the grandchildren in the ’80s that is used for storage now. It too has received a facelift to match the brightened main house.

All new cedar shingles and the beautiful blue-grey selected to paint the house completed the renovation. There is an uncommon thread of living history that continues to connect the past to the present at 547 A Avenue. The poignant memories reach far beyond the walls of this historic home.

Those family memories include crowding into the small library on the back of the house to watch the release of the POWs, viewed on a small black and white television screen with the other POW families in Coronado. The table, now Taylor and Anne’s dining room table, is the table around which Sybil and the other POW wives gathered every week to actively pursue the release of their husbands.

A beautiful new custom brass chandelier hangs above the table, fittingly shaped like a crown. “It was Taylor’s idea, and Jim Gibson of Gibson Lightning, who rewired all the antique brass sconces throughout the house, made it for us,” Anne gratefully shared. The Stockdales continue the thread of living history, binding old with new, not only honoring the history and cherished memories but sharing them with all of Coronado for generations by “Going the Extra Mile” to restore this GEM.

GEM Award Winner to be Announced at CHA’s Preservation Symposium!