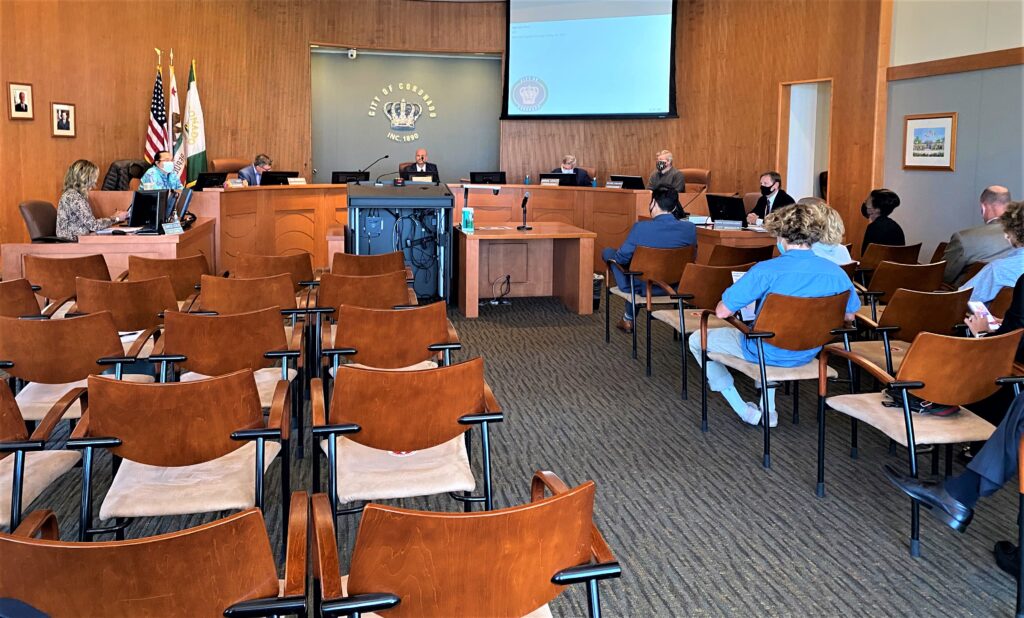 An impassioned plea to allow bikes to use the Coronado Skate Park was made by CHS freshmen Eddie Reynolds and Chase Bergener during Oral Communication. Reynolds responded to the concern of damage caused by pegs on BMX bikes by pointing out they can easily be removed and are used similarly to skateboards and scooters for grinding. He said they started a petition and noted, “We only expected to get 100 signatures, but now have 771 signatures.” He also pointed out that the Tony Hawk Foundation encourages bikes in skate parks. Bergener, who rides both bikes and skateboards, said that the two groups get along, and allowing bikes “only has pluses.” Mayor Bailey said that because the item wasn’t on the agenda, no action could be taken, but noted, “You have our ears” and said to expect a staff report soon for council consideration.

City Manager Mark Ochenduszko gave a report highlighting COVID protocols and the many dimensions as they affect the city workforce, 4th of July and other events, and downtown businesses. “We are awaiting the county health interpretations on relaxing restrictions,” he said. He said the 4th of July committee is planning for a parade on July 3 (since July 4th is a Sunday), but is awaiting guidelines. “It’s better to plan and then pull back if we have to,” he commented. He also noted that Cathy Brown and committee are planning for Concerts in the Park starting June 20 and 27, with no July 4 concert, and then continuing through the summer, if it can be done in a safe way that meets county protocols. City Recreation Camps are slated to begin June 21, with resident registration already open. He noted that sign ups are comparable to previous years. He also mentioned the Cays Park Master Plan special meeting that was held to get the project back on track – he said that feedback has indicated that the public wants no major changes, so staff is putting a proposal together based on community input.

Highlights of the proposed 2021-22 budget and financial plan were presented by City Manager Ochenduszko and details were given by new Administrative Services Director John Kim. Ochenduszko pointed out that this balanced budget was “prepared conservatively as we come out of the pandemic.”

The $60.1 million General Fund revenue highlights include a four percent increase of $1.4 million for $35.4 million in property taxes; with sales tax estimated to increase $3.3 million; Transient Occupancy Tax (TOT) is estimated at $12 million, a $1.7 million increase; and an anticipated $2.3 million will be received from an American Rescue Plan Act (ARPA). Kim noted that while increases are projected, the numbers are not back to pre-pandemic levels for sales tax and TOT revenues. Budget decreases include $176,000 from parking meter collection and $796,000 in investment earnings.

Additionally, $2 million will be transferred to the CalPERS Stabilization Fund, which was established to pre-fund future pension liabilities and to allow for more diversified asset allocation. It follows a conservative strategy for long-term investment, with an anticipated nine percent, five-year rate of return, and an estimated balance of $12.7 million on June 30, 2022. 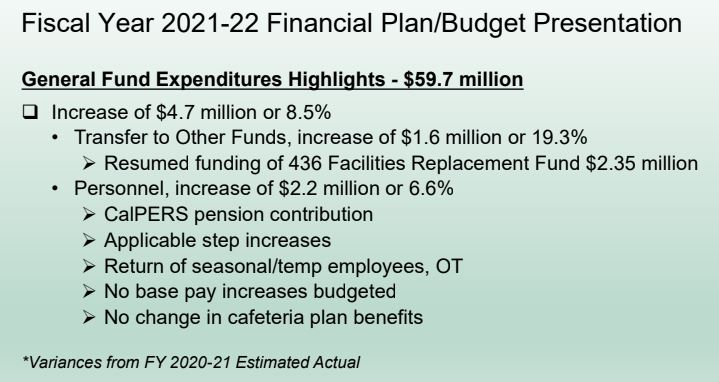 Councilmember Heinze asked several questions regarding the Emergency Operations Plan update, cybersecurity needs, and personnel additions and reductions, to which he was assured that these issues were covered. Councilmember Sandke said “there is tons to like in this budget” and asked why money wasn’t being transferred into the storm water and wastewater funds to which Director of Public Services and Engineering Cliff Maurer said that the two systems are intertwined, due to our proximity to water. Consultants are being hired to study this issue and will look into combining these funds. Maurer also indicated that Coronado has one of the lowest solid waste rates, with the city subsidizing this on a sliding scale, which was previously at 25 percent, now projected at 20 percent, eventually going to zero. Sandke also proposed adding $50,000 to be placed in a fund to address the abandoned vessel problem, to be dealt with as a regional approach with the City of San Diego and the Navy. He noted the success of the previous six month pilot program conducted by the Port of San Diego and the City of San Diego.

Councilmember Donovan made note of the fact that designated budget dollars for several projects like the Winn Room expansion, Parker Pump Station, and Water Reclamation Project cover designs and not the entire build out of the projects. He also discussed the recreation budget, pointing out that it is important to look at fees versus costs. The budget was unanimously approved, with the addition of $50,000 to be placed in a fund to address the issue of abandoned vessels on a regional level.

The state will officially retire its Blueprint for a Safer Economy tier system on Tuesday, June 15, lifting both capacity and physical distancing restrictions...
Read more
Education

Forget your typical stereotype of serapes and sombreros for Mexican attire and step into the world of the newly opened Raguna Boutique at 1024...
Read more
Dining

With fond memories of sharing his dad and mom’s home cooked meals around the family dinner table, Tim Aaron didn’t set out to be...
Read more
Advertisement
Sponsored Partner Links