A new office space and a two month tour across America are some of the exciting changes happening with the Wampler Foundation.

Local nonprofit Stephen J. Wampler Foundation has a far-reaching stretch and is going further than ever this year.

From an office space to a viral nationwide tour kicking off, the foundation is taking its positive message and life-changing experiences for children with disabilities to the next level.

“We’re growing like crazy,” shared Elizabeth Wampler, whose husband is Stephen — who has done anything but be held back by cerebral palsy, including being the first person with CP to climb El Capitan. “It’s just rapid-fire growth. We’ve hired a few new people, and it was just time to get an office space. But the main reason was that for 19 years we were at home raising kids.”

With both their daughter and son off to college now, she shared how the roles are adjusting for everyone and their purpose has shifted somewhat. With a larger staff and more room needed than a home office space, Elizabeth discussed how the new spot allows for their approximately 70 members on staff, including the summer team, to operate better.

“We’ve had countless visitors which we totally encourage,” she added of the new location, mentioning how they’re completely settled in. “We never knew how much we needed an office space … It’s been absolutely a magical experience. It’s a weird thing to say. We needed it more than we even knew.”

Elizabeth said they’ll have an official open house once the pandemic has ceased. Additionally she explained how since they can’t hold their annual Camp Wamp due to COVID-19, they’ll be doing “maybe one of the most exciting things we’ve ever done…and we’ve done some really fun things.” 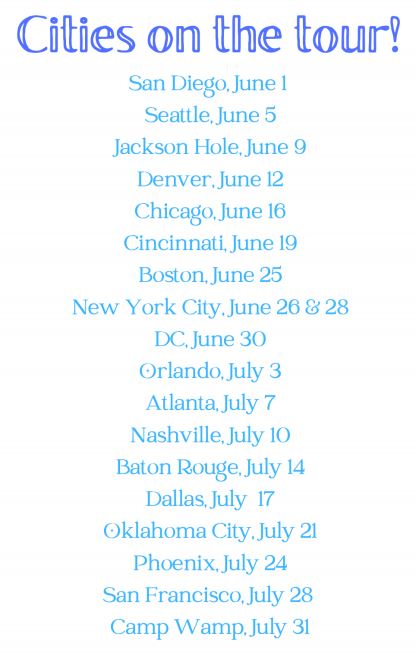 June 1 commences Camp Wamp’s Disability & Optimism Tour Across America. Steve Wampler started Camp Wamp in 2002 and all campers go to camp for free. In lieu of the typical Camp Wamp, the team is going across America to celebrate disability and give children once-in-a-lifetime experiences spanning 18 cities, documenting the story along the way on social media through July 31 and covering approximately 10,000 miles.

The journey includes a motorhome on a mission to find campers for the summer of 2022 at the original Camp Wamp. Follow the adventure @thewamplerway. And keep an eye out in cities ranging from San Diego to Seattle, Denver to Jackson Hole, Chicago to Cincinnati, NYC to DC, Orlando to Nashville, and more.

Camp Wamp is also asking if you know of an extraordinary place; the foundation is looking for access to the most incredible experiences the United States has to offer and not easily accessible to the general public. So what and who do you know? Any ideas?

“We thought long and hard about what was left and what we could do,” Elizabeth said, highlighting how the road trip is sponsored by “a great company, Eset. They have been longtime, great phenomenal friends and partners to us.”

While recruiting both campers and counselors along the road, Elizabeth noted “the biggie” is treating four kids and their parents or caregivers at each stop to “the most fun they’ve ever had … we’re looking so far out of the box;” she mentioned looking into blimp and monster truck rides. “We’re using our imagination to really bring them an imaginative experience.”

She also described how the more kids know possibilities exist, the more the world feels opened up to them.

The campaign has been extremely popular on social media, garnering attention through a TikTok video made by their son as a surprise and going on to gain nine professional sports teams’ involvement.

“It was just one little post,” Elizabeth said of the viral campaign spearheaded by her son, Joe, and his friends. “The ground swell has been absolutely crazy … Our son just created a very powerful TikTok following from nothing,” and it was to the complete astonishment of his parents; the surprise aired on national television.

“He wanted to support his parents and our foundation, and the people on TikTok pounced on him in support. It’s taken off from there, down these incredible paths that now have us looking for celebrities to join in this happy trek across the States … We had no desire necessarily to go down this road but we’re in it now,” she said with a laugh.

The Wamplers’ daughter, Charlotte, is graduating from USC this year, and Joe is finishing his sophomore year at LSU. Joe will be leading the tour with his four close friends Cal Frank, Elliot MacAdam, Lance Mann and Jonathan Mehki. The young men have grown up being part of Camp Wamp.

Elizabeth and Steve Wampler married in 1995 and have been working full-time with the foundation since 2002.

She encouraged people to come to the new office at 1014 Ninth St. on June 1 at 9:30 am for a celebratory send-off for the boys, and, in the meantime, they’re welcoming foundation volunteers.

Those interested in having their child with a disability participate in the tour can email [email protected]. The team is also looking for corporate and individual sponsors as well as youth who want to help by setting up a lemonade stand or the like — send photos and they’ll share your kindness.

Details are subject to change but keep connected at the Linktree platform accessible through the team’s social media channels on TikTok, Instagram and YouTube with the handle @thewamplerway, as well as on Facebook with @StephenJWamplerFoundation. You can also learn more at wamplerfoundation.org.

Find out more about the tour, the cities, how to get involved and more, in this Tour Overview.

Aly Lawson
Aly has a BA in mass communication, emphasizing journalism and public relations, and a MBA in marketing. She has worked as a reporter and marketer in various industries and overseas. She also won a best community business story award from the Nevada Press Association in 2017. Originally from Washington, this is her second time living in Coronado, where her husband is stationed as a Navy helicopter pilot. They have two small children and the whole family adores Coronado. Have a story for The Coronado Times to cover? Send news tips or story ideas to: [email protected]