It was a day of celebratory and bittersweet proclamations at the April 20 City Council meeting, with other topics including renaming the San Diego Bayshore Bikeway, revisiting undergrounding utilities, the free summer shuttle, Cultural Arts Commission report, and the Fourth of July fireworks tradition. 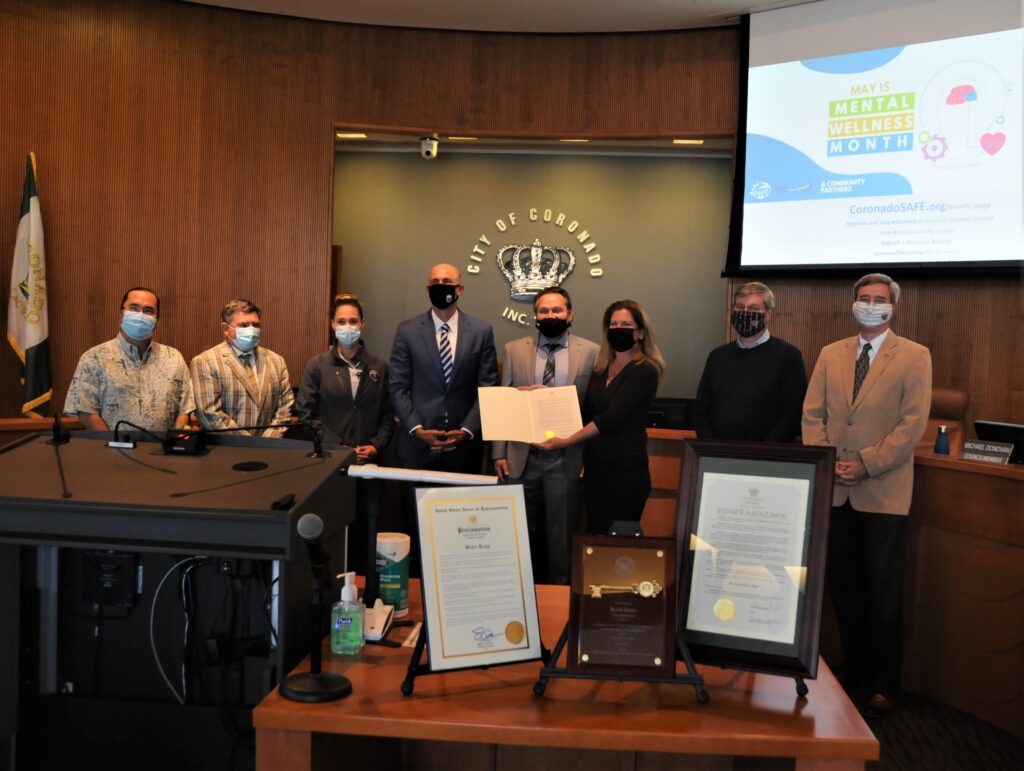 Mayor Bailey proclaimed May as “Coronado Mental Wellness Month” and presented a proclamation to Coronado SAFE Executive Director Georgia Ferrell, Dr. Mark Marvin, and PERT Clinician Elizabeth Peters, encouraging the citizens, agencies, businesses, and schools in Coronado to commit to increased awareness and understanding of mental wellness.  Ferrell stressed focusing on the positive and identifying issue before they reach crisis level.  She encouraged the community to attend events hosted throughout May.

Police Chief Kaye gave a presentation on the department’s partnership with the Psychiatric Emergency Response Team (PERT), which began in 2007. He highlighted that all Coronado police officers receive additional mental health training to help with the multiple crisis situations that arise. Training includes de-escalation, use of force, PERT Academy, critical incident management, biased-based policing, and crisis negotiations. In 2020, there were a total of 628 PERT contacts with 45 resulting in 5150 placements.

April 20 was also designated as “Senator Jim R. Mills Day” and a proclamation was presented via Zoom to his family. A Coronado resident, Mills was a State Legislator for 22 years, who championed transit and historic preservation. He is the namesake of the Mills Act, which gives tax incentives to assist homeowners in preserving and restoring historic resources, which is key here in Coronado. 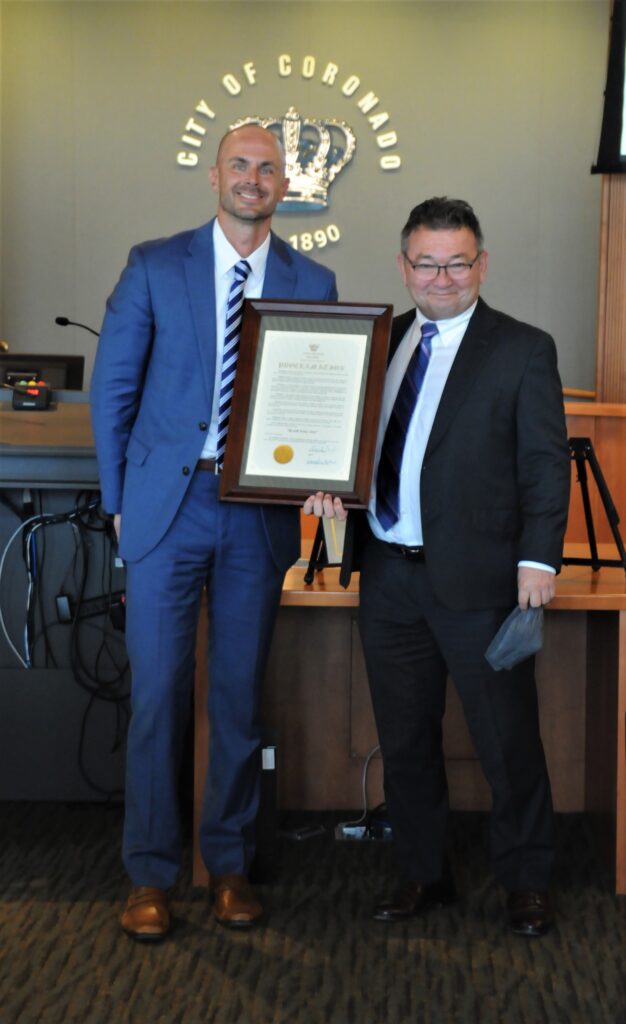 April 20 was declared “Blair King Day” in a proclamation presented by Mayor Bailey. King started as Coronado’s City Manager in May 2010, in the midst of his extensive 36-year career, with 25 years as city manager in Soledad, Imperial Beach, Half Moon Bay and Lodi.  His next position will be closer to family in Bainbridge Island, Washington. City staff put together a video highlighting his time in Coronado. During his tenure, he oversaw numerous capital projects like the completion of the John D. Spreckels Center, redevelopment of the City’s Marina and development of a 115 trust fund, to name a few. The council and audience gave him a standing ovation and wished him well in his new venture, and said they will miss his sense of humor, work ethic, and community commitment. Director of Public Services and Engineering Cliff Maurer continued the outgoing tradition by presenting him with a “King Blair” street sign.

For his very last staff report, City Manager King talked about the possibility of having Fourth of July fireworks this year. Committee Chairman Todd Tanghe reported that a $15,000 deposit must be made by April 30 to secure the fireworks. He discussed the options of launching the fireworks from a barge, which is usually done, versus from land, which is more economical. The mayor said this is a “return to normalcy, while still following the health guidelines.” The councilmembers were pleased to unanimously approve the fireworks show, which will be launched from Stingray Point. The fate of the Fourth of July parade and other events have not yet been determined. 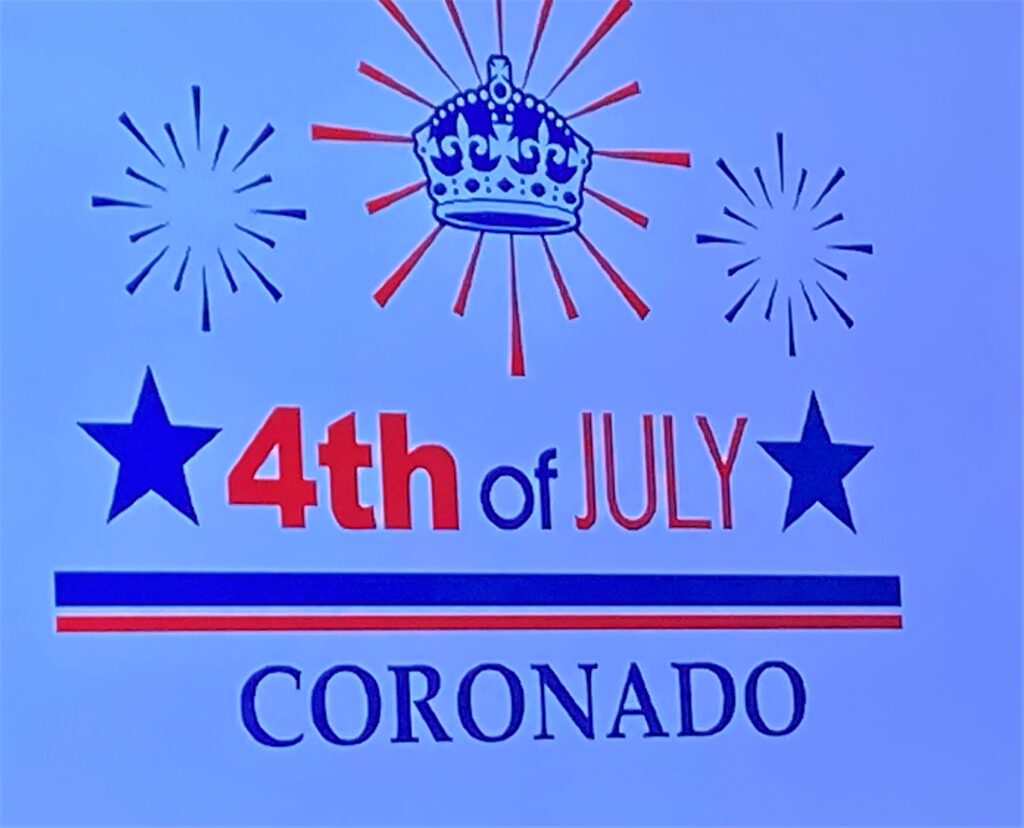 The MTS Free Summer Shuttle will be coming back to Coronado this summer starting on June 1. There will be a special Fourth of July shuttle for the Coronado Cays on both July 3 and 4. Staff had originally suggested a start date of July 1, but the council felt that an earlier start date was warranted for summer crowds.

The utility undergrounding discussion was continued from the previous council meeting and Director of Public Services and Engineering Cliff Maurer gave brief history of the two and a half year timeline. He noted that the Coronado Beach Resort initially approached the city about undergrounding the conversion district along parts of Adella Avenue and Ynez Place. When 20A funds were brought up, it was noted that on April 7 the Public Utility Commission (PUC) will stop that funding as of December 2022. Council had asked staff to go back and ask the businesses and residents in that area to contribute additional funds and Maurer noted that the promised $70,000 was all they could expect, but they are hoping for better participation for future projects. He, former Councilmember Carrie Downey, and Councilmembers Sandke, Heinze, and Donovan, and Mayor Bailey felt that spending the $1.35 million for this project could start the process and be an example for future projects.

Councilmember Tanaka discussed the total cost to underground the entire city, which was estimated at $175.5 million in 2018, but costs have now escalated 25 percent to approximately $219 million. He doesn’t see this as a feasible option for spending city funds with only around $25 million earmarked thus far. He commented “I’m all out. Undergrounding is unaffordable.” Councilmember Heinze said he is in favor of upgrading infrastructure for safety and aesthetic reasons. Ultimately, the council approved a motion, with Tanaka opposed, to approve this project and direct staff to bring back other undergrounding districts for consideration.

Cultural Arts Commission Chairman Helen Kupka introduced the well done, comprehensive CAC Annual Report video created by Vice Chairman Brad Willis. Kupka said “Science is how we solve problems, but art is how we cope with them.” Pivoting during the pandemic, the CAC created a successful public art walking app, filmed 40 videos featuring artists that have reached 100,000 views, held virtual music recitals, hosted grant writing workshops for arts partners, sponsored art-related banners on Orange Avenue, as well as working on revamping the website. Council gave kudos for the outstanding work the CAC has done and approved the 2021 Work Plan with several minor changes. Commission Staff Liaison Kelly Purvis said that the Public Art Master Plan is almost complete and will be presented to the council in the next several months. Other commissioners include: Deb Kaller, Facilities; Mariah Gillespie, Arts Education and Performing Arts; Mark O’Brien, Special Events; Teresa Espaniola, Programming; and Tillie Vuksich, Communications. Kupka noted in this time of uncertainty that “the arts have inspired and soothed us in this past year.” Watch the video here: youtu.be/43U1xC-pCW0 or below:

The city recently received an award from the American Public Works Association for the newly redeveloped Mathewson Park. King recognized Associate Architect Ruby Carr for designing the universally accessible playground that is the first update of all the city parks.

The council unanimously voted to approve a historical alteration permit for 350 D Avenue.

Assistant City Manager Dominique Albrecht gave a presentation on requested fee adjustments for PAWS Animal Care Facility. Pet microchipping fee will be $25, with a decrease in animal daily care fees going from $31 to $20. Councilmember Heinze brought up his concern over the 62 percent increase in the three-year unaltered dog license fee going from $56 to $90, so he made a motion to only increase the fees by 50 percent this year, and fifty percent next year which the council unanimously approved.

A request by Councilmember Tanaka to switch Coronado Police Department vehicles to all-electric was tabled until the next meeting.

https://youtu.be/SgGa0v7Z_2kThe spring edition of the Avenue of Heroes Hometown Banner Ceremony will be held May 22. Find out all about the virtual event in...
Read more
Education