On December 30th, 2020 I went out for my second swim of the day near “The Shed” [G Avenue Beach Maintenance Shed] at G Avenue. I was just west of some surfers that were getting some good rides. By coincidence, Coronado Beach Lifeguard Garison Covel was sitting nearby in a City Beach Lifeguard truck.

The ocean water temperature was maybe 56 degrees, so pretty cold, wearing just a Speedo. I strapped on my goggles, swim cap and Government issued UDT Duck Feet and headed out through the surf, duck diving under the waves. I had recently lost one of my smaller Arena training fins in the surf so I’d switched to my trusty UDT Swim Fins.

Clearing the surf zone, I kept my eyes seaward kicking west-bound on my side, right arm extended. I hadn’t gone more than about 20 yards, when a strong tug on my right leg stopped me dead in the water. I immediately rolled over, and saw a shark’s head poking out of the water at my feet, slick gray skin, a big black eye and a little white coloring under the nose. I’d seen enough video footage from Dr. Chris Lowe’s Cal State Long Beach Shark Lab over the past two months to know it was a White Shark!

My heart was in my throat, and I didn’t feel like I was swimming fast enough to the safety of the beach. I rolled over in the roiling water, took off my fins, got to my feet and ran to the City Beach Lifeguard Truck. I showed Garison my chewed-up fin, “Hey, I just got hit by a shark.” He replied, “I saw you go out…., but I’ve never seen you come in so fast.”

Garison used the PA to calmly call the surfers in from the immediate area. The surfers had seen a White Shark’s fin break the surface of the water but none of them had seen the attack. 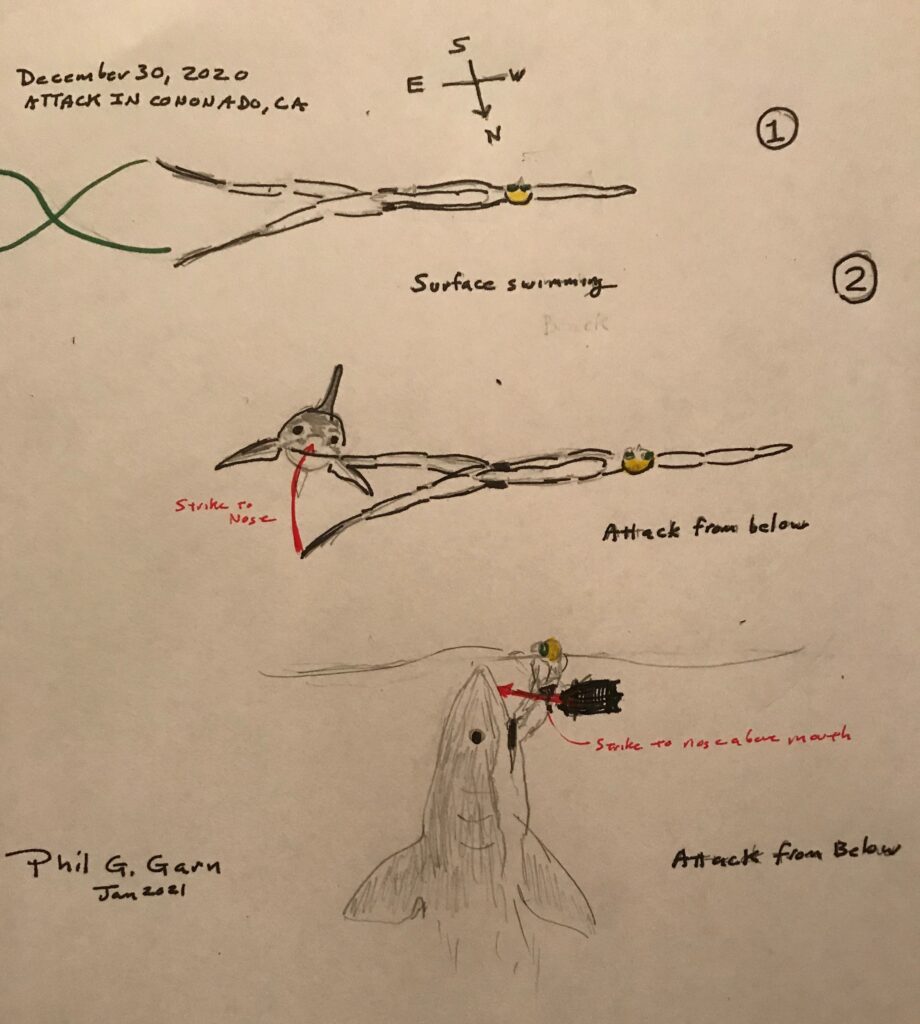 Contrary to both televised and printed news stories this was not merely a “nip on the fin.” To characterize my incident as such was not only arrogantly dismissive but also irresponsible. The bite radial impression was clearly defined across the full width of the fin blade and there was a small tooth fragment imbedded in the hard rubber along the stiffening batons. Steve Ogles and I contacted Dr. Lowe and Anderson and immediately sent my right UDT swim fin up to Cal-State University Long Beach, Shark Lab for analysis.

To see the International Shark Attack File report with additional photos of the fin, bite marks and more,
click HERE.


The ISAF report is made available with permission of both Phil Garn and the ISAF.
Learn more about ISAF (the International Shark Attack File), which is the world’s only scientifically documented, comprehensive database of all know shark attacks.

When I was filling out the Shark Attack Report form a couple of days later, I carefully reconstructed the swim. I realized that the shark had attacked me from below and bitten my right swim fin on the down kick and then my left swim fin had likely kicked hard into the shark’s nose on the up kick. That left fin kick to the underside of the White Shark’s nose is critical. The electroreceptor tissue in that area is populated with ampullae that appear as a line of small holes, or pores. Those pores lead to short channels filled with a jelly-like substance. At the other end of the channels, behind the jelly, are special sensing cells. I’m convinced that my left fin’s kick shocked and disrupted the White Sharks sensing cells causing an unpleasant sensation which led it to release its bite a fraction of a second later.

Liberty Call continues to show its 'bridgeworthiness' by rolling out new $10 Lunch Combos that invite diners to mix and match across a new...
Read more
Dining