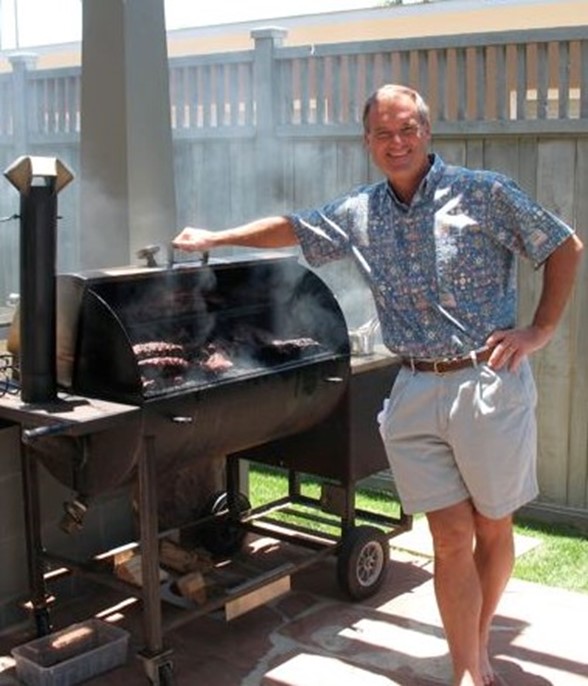 James Cortelyou Purvis, husband, father, grandfather, brother, Black Bear, Trojan, and Beta died on March 15, 2021 at the age of 67 after battling a cruel form of early onset dementia – bvFTD. He remained at home during his progression and died with his wife and sister-in-law by his side.

James (Jim) was born on January 20, 1954 in Massapequa, New York to Charles and Mary Purvis. He was the middle of three children. He attended school with Jerry Sienfeld, Peggy Noonan and one of the many Baldwin brothers.

At the age of 15, his family moved to Bar Harbor, Maine, and Jim graduated from Mt. Desert Island High School. Jim was an active Eagle Scout and was on the football and wrestling team.

He graduated in 1977 with a BS in civil engineering from the University of Maine in Orono. During his time at UMO, he was an active member of the Beta Eta Chapter of the Beta Theta Pi Fraternity, building many life-long friendships. In 1981, he packed up his one suitcase and flew out to Los Angeles, where he attended the University of Southern California. He served as an advisor and member of the Gamma Tau USC Beta chapter and built a west-coast contingency of life-long friends. In his last semester at USC, he met his future wife, Kelly Gabriel, while attending a college social event. They lost their first foosball game playing together that evening but won the marriage game big over the next 40+ years.

He received his MBA from USC but on graduation day he reported to work at Parker Properties in Costa Mesa, California and would go on to work in the Commercial Real Estate Development industry for 35 years founding his own company, San Diego Realty Advisors in the late ’90s. Jim and Kelly married in Bar Harbor, Maine in 1984. They had three children together – William, Amanda and Claire. They moved into their home at 560 C Ave in 1987 and built a life in Coronado embracing all that community had to offer.

Jim always put his family and friends first and cared deeply about those he loved. He was an upbeat man, who always knew the perfect song to play in each moment. He had a dry sense of humor and found the silver lining in even the darkest times.

Jim was known as the life of the party. His annual Fourth of July Weekend was legendary, from the Patton screening on the night of the 3rd, to smoked ribs and ice-cold Stella all day on the 4th. His annual Christmas Eve gathering featured a seafood buffet, champagne, rusty nails, family, friends, and a few early gifts (including a puppy).

Jim enjoyed deep sea fishing trips, scuba diving, skiing, grilling and USC football tailgates. He ran six miles, five times a week and made a mean spaghetti. He spent countless hours and personal dollars to help rebuild his old fraternity house in Maine and he donated generously to his alma mater USC. He was just as at home in a business suit as he was in a bathing suit. Shorts and white wool socks were his “this is what I’m wearing” uniform. He was a true renaissance man and had an unparalleled zest for life!

He is survived by his wife Kelly and their children William, Amanda (Stan Withouski) and Claire, his siblings Elizabeth and Rob Purvis, his brother-in-law Kurt Gabriel (Madeline, Daniel and Andrew) and his sister-in-law Denise Gabriel (Caitlin, Chad and Beckett Barnhardt). Denise moved to California in July to assist the family and enable him to remain in the home he lived in and loved for nearly 34 years. Finally, his legacy is an amazing grandson, SJ (Stanley John Withouski, V.), who stole his heart, made him smile and gave him the title of Grandpa Jimbo!

Jim was a proud member of Beta Theta Pi and contributed both his time and treasure when he was able. Kelly referred to it as “doing some good recklessly.” His family asks if you are so moved, you to make a donation to Beta Theta Pi or to something that you too are proud to support.

Oh, how we miss him. Fight On! and Beat the Bruins!