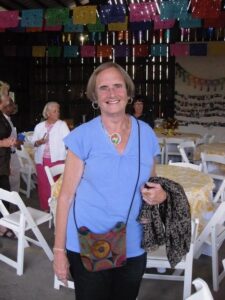 Ann Rogers Oster will be remembered for her creative spirit, her kind and easy-going demeanor, her love of California sunshine, folk music, Mexican culture, floral prints, cats and Twizzlers.

Ann was born in San Francisco. Her father, William Kittredge Rogers, a graduate of the Naval Academy, Class of 1938, was a career Naval officer, so the family moved often during her childhood. Places called home, which will be familiar to Navy juniors, included Newport, RI, Alexandria, VA (twice), Long Beach, CA, Coronado, CA (twice) and London, England. Most of her primary education through her junior year in high school occurred in Coronado, CA. She graduated from Hammond High School in Alexandria, Va. in 1963. Ann attended several colleges, including Cazenovia College, the University of Maryland extension in Madrid, Spain, and she graduated from San Diego State College with a major in Crafts.

Ann’s parents recognized her artistic talent at an early age and provided art lessons from the time she was ten years old. Ann’s artistic interest and talent were a guiding force throughout her life. After her marriage to Robert Lee Oster in 1972, she relocated to Baltimore, MD. Together they raised two children in Roland Park, Bessie Oster, now of Brooklyn, NY, and Nick Oster, of Baltimore, MD. Following Nick’s premature birth in 1979, Ann founded Parents of Special-Care Infants, Inc., a volunteer peer counselling network which served families in eight Baltimore-area hospital special care nurseries. She was also a founding director of Parents of Premature and High-Risk Infants, International, Inc.

After continuing her graduate education at Maryland Institute College of Art, Ann taught Art at St. Paul’s School for Girls for nearly two decades. Many of Ann’s students were inspired to pursue their interest in art through her unique teaching techniques that not only brought out her students’ perception of color and design but nurtured their creative intuition.

Ann made art throughout her life. Wherever she was, she found inspiration to paint and draw from nature. Although Ann used many types of media for her creations – clay, needlepoint, beads, papier-mâché – her pastel landscapes and portraits are of surpassing beauty. Ann was prolific and generous with her creations and she will live on forever through the legacy of her work. This December, she hand-painted sixty ornaments for her building neighbors.

After retirement, Ann was drawn back to Coronado, spending winter and summer in southern California and spring and fall in Baltimore. On both coasts, her homes reflect her whimsical style, filled with light, color, and beautiful artwork.

In February, Ann was diagnosed with late-stage endometrial cancer, associated with BRCA1. She was determined to spend her remaining time at home in Baltimore, surrounded by her family and friends, her art books, old photographs and her paintings. She died peacefully with her two children by her side.

In addition to her children, Ann is missed by her daughter in law, Erin Hall and son in law, Jason Gay, plus her grandchildren, Jesse, age 7, Josie Ann, age 6 and Obi, age 3. She is also missed deeply by her younger sister, Kitt Williams of Coronado and Kitt’s son, Ann’s nephew Jay Poole, of Wilmington, NC. She is remembered with fondness and respect by her ex-husband, Bob Oster.

A memorial celebration in Baltimore will be planned for the fall along with a retrospective art show of Ann’s work.

In lieu of flowers, please consider a donation to the American Visionary Art Museum or the San Diego Zoo, two organizations of great importance to Ann.