Tony Perri set out to open a formalized tour company in conjunction with Emerald C Gallery. The “Island Tour” is a daily guided walking tour that takes about an hour and covers Coronado’s rich history and culture as well as a great deal of information found in Jennifer Franks’ book Crown City by the Sea.

In October 2020, Penny Rothschild of Emerald C Gallery informed Tony of an available storefront tucked in the El Cordova plaza at 1339 Orange Ave. The space was already built out, ready to go, and Tony made the tough decision to transition from no overhead to having a monthly rent and all the other details that go into a brick and mortar location.

The original Coronado Beach Company was founded in 1886 and the company sold plots of land. In his research, Tony found that the company was never registered with the state. Tony took over the name, registered it with the state, and now proudly owns Coronado Beach Company. The main business is the Island Tour, but now there’s a beach café as well.

Tony figured that along with a tour, he’d provide coffee and a donut, not realizing how popular donuts would be. He explains, “I opened the doors just before Thanksgiving as a soft opening, I wanted to see what people liked. I spent three months making it my place and finding the right baker. We fully opened March 1st. What I hear most by people is, ‘this is so adorable!’ and that it reminds people of Europe.” 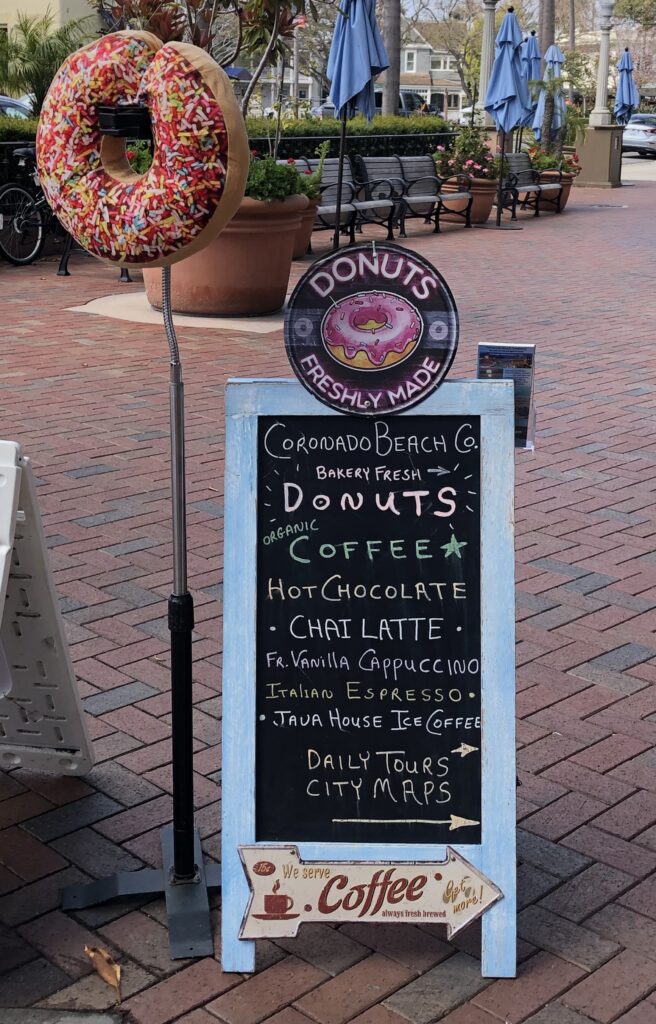 When Tony began selling donuts, he was shocked by the response. He shares, “I didn’t set out to compete, but I found my niche. Donuts are flying off the shelf!” He sells dozens daily, and with spring break and summer coming he is ramping up to sell more. While Tony does not bake the donuts himself, he has a baker from whom he picks up fresh donuts every morning before he opens.

Tony is learning the donut and coffee business as he goes. On Valentine’s Day he sold 180 donuts and on Sundays there is an increase in the amount of children who are out for a donut. Due to this, he he stocks up on sprinkled and cake donuts. He says that sugar twists and anything maple sell the least, and the most popular items are apple fritters, buttermilk, and cinnamon rolls. Word has spread about the donuts. “People tell me ‘it’s about time we had a donut shop on this side of town. You did it right.'” While the Beach Cafe has much more than donuts, Tony hears many call him the donut shop.

Included in the café offerings is old school packaged ice cream such as Klondike bars and Drumsticks, water and soda, and other snacks. There are Coronado specific novelty items such as tote bags and postcards, as well as souvenirs and an assortment of smaller items beach goers need, e.g. sunglasses, sunscreen, lip balm.

All the artwork in the shop is for sale. Artists represented include photographer Dan McGeorge who previously had a gallery in Coronado, and Tony Perri himself.

Tony runs things old school. You will not see him on Facebook or Instagram. A TripAdvisor website exists for Island Tours at TourCoronado.com, but not for the shop itself. He recommends customers who want to place a large order of donuts to let him know ahead of time, by coming in in person a few days in advance.

Current hours are 8am to 6pm, but may be extended during summer
1339 Orange Ave, Coronado 92118
Shop is closed during the 3pm daily tour