Building a new home is an exciting endeavor, and it typically takes months to see significant progress. But a new construction project at the corner of 8th Street and C Avenue has drastically altered that timeline with the framing of a two-story home completed in just five days rather than six or more weeks. The 2200 square foot house is being built for a client by Flagg Coastal Homes who partnered with Agorus to use this efficient and more affordable method of building.

Agorus is a framing company that builds everything with machine precision, including walls, floors, roofing, and more, offsite at their factory warehouse in El Cajon. The pre-made pieces are then trucked to the site and set in place with a large crane. Founded by Navy veterans Kyle Tompane and Garrett Moore, this is the eighth home that their innovative company has built, and the first in Coronado where they both live. Many of their 15 employees are also Navy veterans.

Here’s how the building went up: the construction started at 8 am on the first day, and by early afternoon the first story walls were in place. Kyle stresses that it is vital for all the walls to be level and squared for the integrity of the entire structure. The second day the second story floor system was put in place, followed on day three by the second story walls. The traditional attic space roofing system went up on day four and day five is the final buttoning up of the project. This quick turnaround not only saves time and money, but also cuts down on the noise and mess for the surrounding neighbors.

Kyle and Garrett saw a lot of opportunities for more efficiency in the building industry and started Agorus just one year ago after doing research, developing a business plan, and purchasing machinery from Germany and New Zealand, where this type of construction is used (as well as in many other countries) in 90 percent of building. Kyle points out that there are other companies in the U.S. fabricating walls and then putting them in place, but Agorus is one of the only U.S. companies manufacturing all facets of the building off site and then erecting the panels in a matter of days. Agorus has the capability to build homes even faster, having just completed a 1200 square foot home in Imperial Beach in just two days. 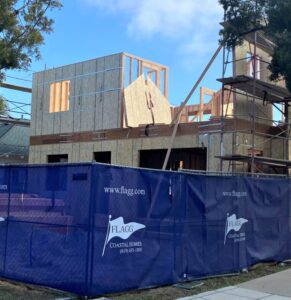 This project brings things full circle because Flagg Coastal Homes and John O’Brien built Kyle’s home, and John was a proponent of panelization and encouraged Kyle to create his company. The name Agorus comes from the Greek word Agora, which means central gathering place, and Kyle shares that a home should be the center of everything in your life. “We help build people’s lives, not just structures,” he says.

That philosophy matches those of the Flagg Coastal Homes team, founded by John and another Navy veteran Mark Blore. John arrived in Coronado in 1969, the same week the bridge opened. After five years in the Navy, including three based in Coronado, he worked in commercial real estate in Newport Beach and San Diego. In 2000, he and Mark founded Flagg Coastal Homes and started building houses. To date, Flagg Coastal Homes has completed 64 new and remodeled homes. They specialize in historic renovations and coastal inspired looks. With a signature style, where the clients’ name their homes, a name plaque is placed on the front of each home. Some names include Timeless, Promises Kept, Sea Star and Salty Dog.

The future for Agorus looks bright, having just raised venture capital money and recently moved to a larger facility that will accommodate building a home a day. They hope to soon scale throughout San Diego and then across the U.S. as they change the building industry one project at time.

Below: Troy Brajkovich is the owner of an Encinitas based film company. His website is: visualearthmedia.com He was onsite doing a shoot for Agorus.

The Coronado Historical Association is dedicated to preserving our community’s special heritage and celebrating our past, present, and future.In that spirit, every year since...
Read more
Military

At the council meeting on March 16, City Manager Blair King announced his resignation as of April 29, and he presented flowers to his...
Read more
City of Coronado

The City of Coronado was named Emerald Keeper of the Month by President Amy Steward, along with Board Members Ginger Cox and Christina Slentz...
Read more
Advertisement
Sponsored Partner Links