The playground at Mathewson Park (often referred to as Pomona Park), in the triangle formed where Adella Avenue meets Pomona Avenue, recently underwent construction to become universally accessible to all people regardless of age, size, ability or disability.

For years, Coronado’s Fabiszak family has been a champion for universally accessible playgrounds in town and their advocacy will ensure all eight Coronado parks will eventually be updated for universal access. In December 2019, when city council approved the project, Mathewson Park was selected as the first location for the accessibility update as it is the oldest playground and replacement parts for the equipment that was there were no longer available. 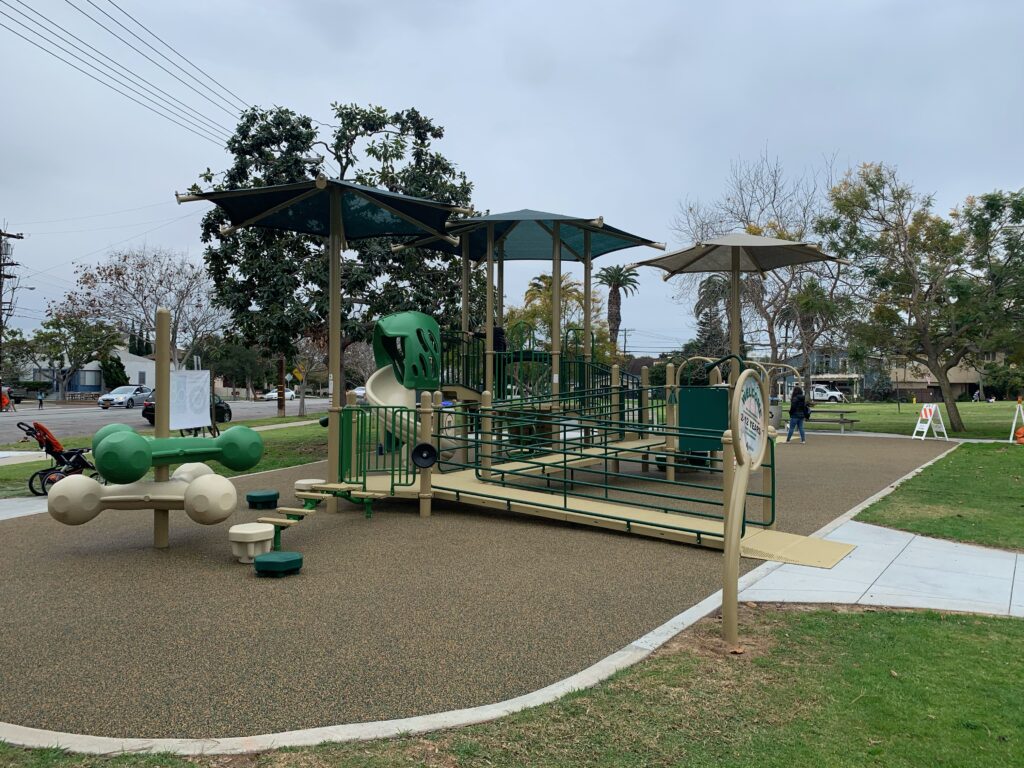 Construction started November 30, 2020 including demolition of the existing play equipment and removal of surfacing including the wood chips ground cover. Families might remember shoes filled with wood chips from playing at the old Mathewson Park playground, but the recent construction added a cleaner, soft rubber playground surface.

The playground renovation features new accessible and inclusive play equipment for ages 2 to 12 with shade cover. The central play structure can be entered from two wide ramps that lead to platforms at one and two feet height with games such as tic-tac-toe, a finger maze, and a xylophone. Children can also climb stairs to a four foot high platform with two slides. A separate swing structure includes four swings with two designed for those with varied abilities.

The playground no longer includes high monkey bars; the new play structure has a maximum height of four feet.

Park-goers will remember the previous playground’s large sandbox. The updated playground kept the sandbox so families can continue to go home with sandy shoes and clothes, while adding an elevated sand table for additional access. There is a new accessible picnic bench with footings submerged under ground to facilitate wheelchair access.

Veleria Fabiszak commented, “We are looking forward to the opening of the new Universally Accessible Playground at Mathewson Park that will benefit all children of all abilities. This is an amazing opportunity for the children who live within our community with various disabilities such as autism, cerebral palsy, Rett Syndrome, to have inclusion with their able bodied peers that will inspire friendships as well as opportunities for their caregivers as well as parents, grandparents and siblings. It is an opportunity that will also bring about awareness of such exceptionalities to our community and provide a fun and joyful place for families to gather for support, and share resources while their children/grandchildren have the joy of being outside playing on the accessible equipment vs being in a hospital, therapy room, or simply within their own home isolated from having such inclusionary opportunities and fun!”

The playground opened early morning on February 1 with the official grand reopening ceremony being planned as a virtual event in March. The finishing touches on the playground include bike racks and an accessible drinking fountain with a bottle filler that will be installed later this year.

Coronado had budgeted $145,000 for the Mathewson park playground update, which is the cost for traditional playground equipment. The city secured a California Proposition 68 state grant to fund the remaining part of the $240,000 – $275,000 total estimated cost for the project.

Spreckels Park playground is the next Coronado playground to be updated with universal accessibility with an expected construction to be confirmed.