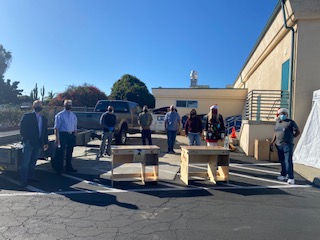 Never before has a home desk for students been such an important piece of furniture than with this year’s at home distance learning model during the pandemic. When Coronado resident Gil Martin saw an article about a San Diego man who had made a desk for a student in need, he thought, “I could easily do that for hundreds of students.”

Gil’s company, Martin Furniture, is a leader in producing wood furniture, including cabinets, bookcases, consoles, and other home and office furnishings. His furniture making skills harken back to his college days, when he worked for a small family furniture business in Lemon Grove. After spending years in management at pharmaceutical and aerospace companies, he started making furniture in his garage with a $400 Sears table saw and belt sander. Shortly after that, in 1980, with a friend’s encouragement and introductions, he began to grow his furniture business. Today, he has a distribution center in Otay Mesa, a maquiladora factory in Mexico with 500 employees, and also consigns with additional factories in Vietnam, China, Indonesia, and India. Clients include Costco, Wayfair, Jerome’s, and Nebraska Furniture.

Although he doesn’t craft furniture himself anymore, he still oversees product development and design. He tasked his engineers to come up with a practical, yet sturdy desk that required no tools for assembly. Last week, they gladly gave out 80 desks at the Loma Verde Elementary School in Chula Vista. They were amazed that 240 parents had put in requests for the desks, so they were handed out by a raffle system. Included with each desk was a letter from Santa and a $25 certificate for the kids to give to their parents for Christmas. An additional 20 desks were given to his employees for their children. They are looking at orphanages in Mexico to distribute the additional 100 desks.

This won’t just be a Christmas blessing, but will continue throughout the year as Martin emphasizes, “These first 200 desks are just the beginning, our goal is to build 1,000 desks to help students within the next six months.” They now plan to add themed stickers, so kids can decorate their new desks with popular characters like Avengers or Minnie Mouse.  His company has done other philanthropic drives including toys and shoe donations to orphanages.

Having been hit hard by the pandemic at first, Martin Furniture had to close their manufacturing facility in Mexico from March to June, but they continued to pay their workers 50 percent of their wages, so they could survive. Now, the demand for furniture has skyrocketed; they have ramped up production but still can’t keep up.

Martin had no idea that his love of wood working would turn into the global company it is today, and he is pleased to be able to help others. He and his wife Alexis and family love the small town feel of Coronado, where they can easily walk their three dogs, bike, and kayak.

Walk, bike, surf, or run. If you noticed more of your neighbors outside exercising last year, it wasn’t because the gyms were closed. Almost 3,000 people committed...
Read more
Business

The URT warehouse has turned on us. Once a happy place with an insatiable appetite for inventory, that took any and all into its steely...
Read more
Obituaries

He was the youngest of 13 children. With all those older siblings to influence him, it’s no wonder Tiger Johnson developed such an indelible...
Read more

After 48 years it’s hard to keep an event as amazing as Artisans' Alley down, and fortunately the organizers figured out a way to...
Read more
City of Coronado