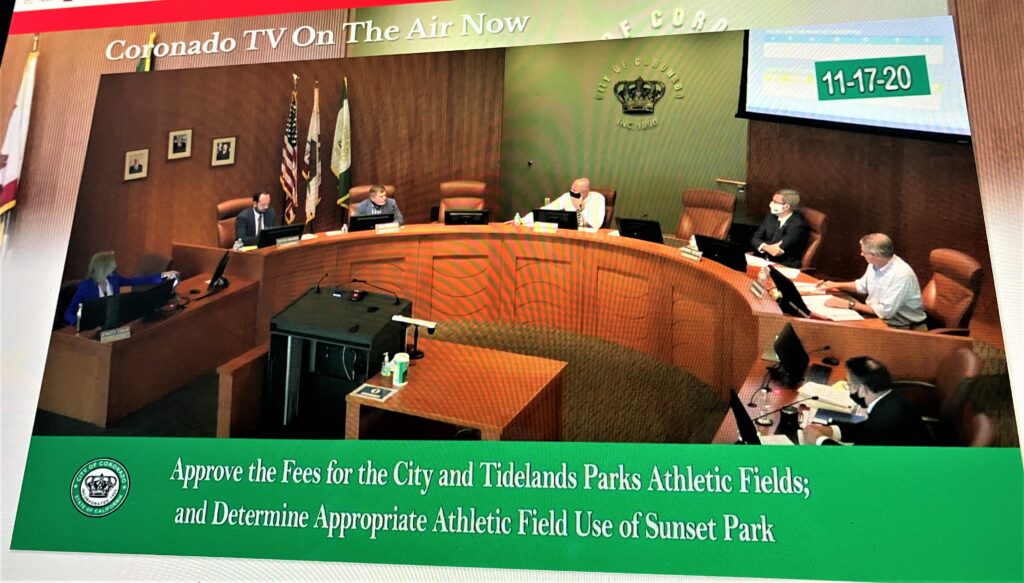 The City Council meeting on November 17 started out on a positive virtual note with winners from the City of Coronado Recreation and Golf Services and the Junior Woman’s Club Turkey Coloring Contest announced by Recreation Programs Supervisor Stacy Berman. From the 89 entries, three winners were selected in each of the three age groups:

Check out all the entries at www.coronado.ca.us/recreationevents or the City of Coronado’s Recreation Services Facebook page. 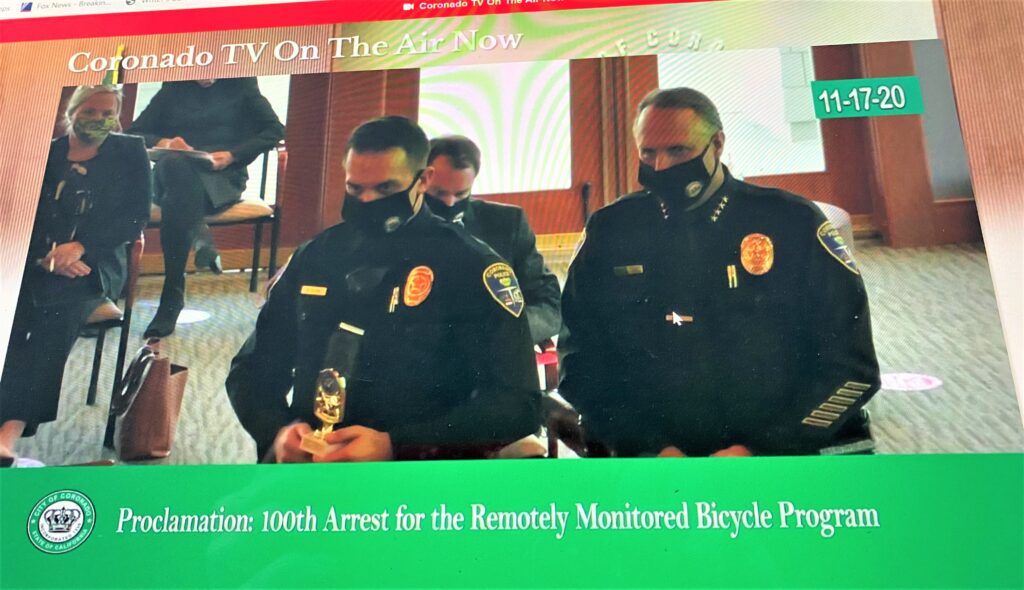 The mayor presented a trophy commemorating the 100th arrest for the remotely monitored bicycle program to Police Chief Chuck Kaye and Detective Kovahn Vlach who coordinates the program. The program was initiated in 2014 and has proven to be a deterrent for the rampant bike theft in the community. City Manager Blair King pointed out that he has been a victim of bicycle theft several times and there were 125 bike thefts last year, as compared to 66 so far this year. In recent years past, the stolen bike numbers were:

The Police Department attributes the reduction of bike thefts partly to the program, and to residents using U-locks and also registering their bikes.

The city council unanimously voted to adopt an athletic field use fee schedule starting January 1, 2021, after a presentation by Director of Recreation and Golf Services Roger Miller. There are two sports seasons, January through June, and July through December.  The new fees would be per person per session. Coronado youth organization participants, such as Coronado Little League, would pay $7 per child. Youth select and travel teams would pay $14 per child, with adult leagues paying $7 per person and non-resident leagues paying $20. A similar fee schedule will also be used for the Tidelands Athletic Fields. Councilmember Heinze asked why the Coronado school teams will not be required to pay fees, to which Miller responded that this is a start and some sports are impacted at the schools; Councilmember Sandke voiced that he was not supportive of the school teams paying at this time.

The City has also proposed a memorandum of understanding (MOU) to the Port of San Diego for Tidelands Park. It includes the city maintaining level fields, baseball infields, and the concession booth. Port staff will be responsible for general maintenance, like mowing, maintaining restrooms, buildings, and trash. The city will schedule and collect fees. Miller pointed out that this will give the city more flexibility and be more efficient for using Tidelands Park.

Under this same public hearing, the council also unanimously approved to update Resolution 6803, which sets the rules for youth sports at Sunset Park for youth ages eight and under. Council asked if there were enough other parks to accommodate all the older kids’ sports, and Miller said that taking control of Tidelands should add sufficient capacity and that the cleats from children eight and under leave the turf in good shape, as opposed sports with older children. 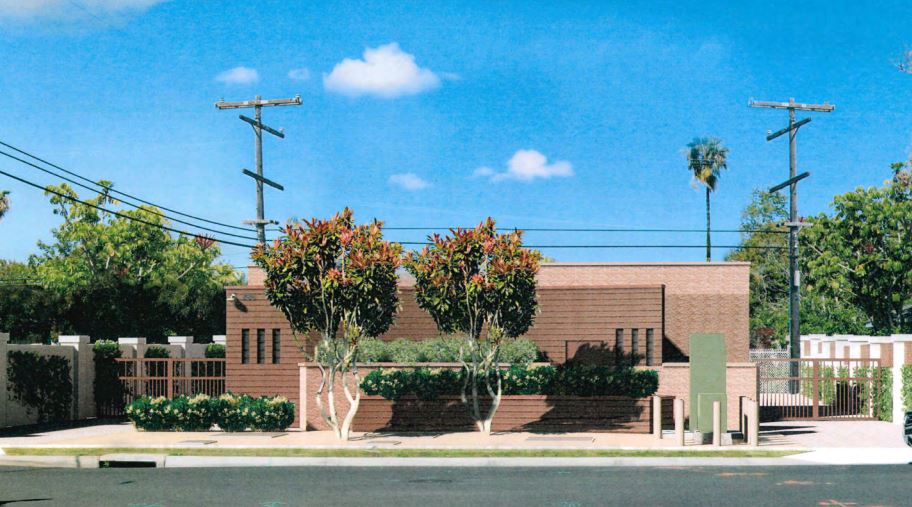 Director of Public Services and Engineering Cliff Maurer gave a presentation on the update to the Parker Pump Station, located at 8th Street and Coronado Avenue, which is a critical piece of infrastructure. The scope of the estimated $10 million project includes demolishing and replacing the existing aging pump station and constructing a temporary by-pass station, with separate structures built to isolate the storm and sewer facilities. The station, which is currently underground, will be built with the electrical controls above ground due to their enormous size, with a permanent generator. Maurer indicated that city engineers took residents’ requests into account after comments were made following Design Review Commission (DRC) approval. These changes included adjusting the color pallet to more neutral colors, designing a new aesthetically pleasing vehicle gate and changing shrub species. They were unable to change tree species due to water levels for root depth, vine species dues to maintenance issues, and adding landscaping to the chain link fence at the rear of the site, due to Navy and SDG&E concerns. Councilmembers felt that the city had been sensitive to neighbors’ concerns, since the station is located in a residential area and unanimously approved the design changes and authorized the project to go out to bid.

Upcoming operational changes to the John D. Spreckels Center, which opened in 2017, were presented by Director of Recreation and Golf Services Roger Miller. The city evaluated the facility programming and operational objectives and determined that they would like to pursue partnerships with the Coronado Public Library and Cultural Arts Commission (CAC), with the goals of increasing participation and programming, providing unique events, utilizing more weekends and evenings, and leveraging city resources.

Examples of collaborative programs include: Trails & Ales, Reader’s Theatre, weekend social breakfasts, memoir writing, special guests, wine and cooking classes, and art exhibits. The city will also utilize space for city offices and create the Friends of the Spreckels Center as a support group. It was noted that pursuing accreditation with the National Council on Aging and the National Institute of Senior Centers will be good for benchmarking, best practices, and comparative notes. The council unanimously approved this motion.

Built in 1973, the library’s Winn Room needs an update. In January 2020, council approved a contract with M.W. Steele Group, the original architect, to design concepts and provide cost estimates. Council seemed surprised when the three concepts presented were in the $5.5 to $7.5 million range. Mayor Bailey commented the cost per square foot was 2.2 times the costs of a luxury home in town and asked for an explanation. Library Director Shaun Briley explained that each of the concepts would double the current size of the room and hold at least 200 people for events. He said that the small build area, structural upgrades (which require some demolition and some new build portions), increasing the roof height, creating an open span without supporting columns for performances, new electric and mechanical systems, paying prevailing wage, and utilizing pre-cast concrete to match the old building, were all contributing factors to the cost. All councilmembers agreed that it needs to be upgraded but felt the price tag was too high and asked to see scaled-down versions before making a decision.

The council heard lots of input on the city’s response letter to the Port Master Plan Update Revised Draft and ultimately approved the letter with several changes. Councilmember Donovan suggested adding the Tidelands Overlay Zone (TOZ) compliance and limit the height of parking structures. The Port still has CEQA and Coastal Commission approvals to go through so there is still time to give input and make changes. Mayor Bailey commented, “We probably won’t get everything we are asking for, but we can make our wishes known.” City Manager Blair King encouraged residents to write directly to the Port with any comments they have.

The Coronado Historical Association is dedicated to preserving our community’s special heritage and celebrating our past, present, and future.In that spirit, every year since...
Read more
Business

Stepping into Trident Coffee, you feel like you are in a sea ship, from the floors to the décor. It's an impressive transformation of...
Read more

At the council meeting on March 16, City Manager Blair King announced his resignation as of April 29, and he presented flowers to his...
Read more
City of Coronado

The City of Coronado was named Emerald Keeper of the Month by President Amy Steward, along with Board Members Ginger Cox and Christina Slentz...
Read more
Advertisement
Sponsored Partner Links