Gobble, gobble! The global pandemic might put a damper on some holiday celebrations, but there’s one tradition that’s going strong: The Coronado Turkey Trot. Instead of one large, live event on Thanksgiving morning, this year, the event is virtual. Participants can run, walk, or bike their own 5k route between Wednesday, November 25 through Sunday, November 29. As always, proceeds benefit the Neonatal Intensive Care Unit (NICU) and Development Services at Rady Children’s Hospital.

According to event organizers, the pandemic has thwarted many fundraising opportunities for Rady’s, which has significantly impacted the ability to fund hospital programs. For some people, like Coronado resident Breen Hardin, the event is personal.

“Rady’s became our second home when our daughter Evie was born at 31 weeks,” says Hardin, whose daughter, now two-and-a-half years old, was born with spina bifida. “She spent nine weeks in the NICU. It’s so hard to leave your baby after birth, but I knew she was exactly where she needed to be. The doctors and nurses took great care of her until she was ready to come home.”

Hardin says that the Turkey Trot is a great way to give back and help support the 60-bed NICU at Rady’s. Registration is open at http://give.rchsd.org/goto/turkeytrot, with a suggested donation of $35. With registration, adults receive a 2020 Turkey Trot t-shirt, and kids get the legendary orange turkey hat. The week of Thanksgiving week, participants can find suggested routes on the Coronado Turkey Trot Facebook page, or, have fun coming up with your own!

The tradition of dressing up in costume is another fun way to make the event festive. This year, participants are encouraged to post photos on the Facebook page, for a chance to win a $100 gift card to the Henry. Judging the costume contest are Evie Harden, along with her two older sisters, Ellie and Eliza. The top fundraising team will win a pizza party donated by High Tide Bottle Shop & Kitchen.

Hardin says the virtual aspect of this year’s event is special because anyone can participate, from anywhere in the world.

“We are a military family, so it’s been nice to have friends and family from all over the country join us,” says Hardin. “So be sure to share with your friends and family…even outside of Coronado. The more the merrier!”

Chris Foote, owner of the Coronado Fitness Club and a founding sponsor of the race since its inception, says that it’s very meaningful to support an organization that does so much good.

“Our daughter spent some time at Rady’s, and we were blown away by the organization,” says Foote. “This year, more than ever, it’s important to participate so we can impact more families, raise awareness and encourage charitable contributions.”

The NICU at Rady’s provides level 4 care, the highest designation available from the American Academy of Pediatrics. The NICU is a major referral center for the most critically ill newborns, many of whom suffer from severe heart and lung conditions or are born extremely premature. Fundraising dollars are spread across many departments, helping the hospital purchase cutting edge equipment, provide care for patients with little or no insurance, train staff members, conduct ground-breaking research, and more. 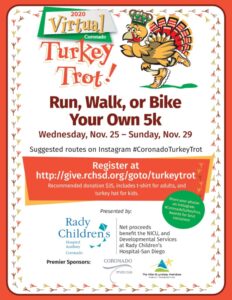 “Rady’s serves so many children and your donations—large or small—make a huge difference in their lives,” says Hardin. “2020 has been crazy for all of us, so let’s use this as an opportunity to do something positive and give back to a worthy cause. We all have so much to be thankful for. Coronado is the perfect location to get out with some friends and family and trot around!”

If you see a couple of figures, crouched down low on the sidewalk in the early morning hours, don’t call the police -- they...
Read more
Education

The Governing Board of Coronado Unified School District met on Zoom on Thursday, December 17, marking the last meeting of the year. New board...
Read more
Education

CUSD School Closure, Round 2: Superintendent Karl Mueller Explains Why Classroom Instruction Was Halted Until After the Holidays

Many parents and students were taken by surprise on Tuesday, December 8, when the district decided to halt all in-person learning at CUSD campuses...
Read more
Advertisement
Sponsored Partner Links