Paddle boarding has been especially therapeutic for Cyndee who suffered a stroke just over a year ago while on a fishing trip with Tom in Minnesota. She has since recovered, but credits paddle boarding as a large part of her recovery.

Travel is an adventure and a way of life for 34-year Coronado resident Cyndee DuMontier and her husband Tom, who has lived here for 20 years. They met seven years ago while both were living at The Shores. Shortly after a humorous encounter in the laundry room, Tom began leaving notes on Cyndee’s door inviting her to coffee, then for drinks, and things blossomed quickly.

Thus, began their travel adventures. Their first trip together started with a three-week trip to Seattle and an Alaskan cruise, and ended up with them travelling all 1400 miles of the ALCAN Highway. Another trip turned into five months cruising from Florida to Barcelona, jetting to Rome and cruising throughout the Mediterranean, and then back to Florida. From then on, every year from June 15 through November 15 they have travelled all over the globe. “We are great travelling companions,” comments Tom.

They love catching a few Padres games during spring training in Arizona. They also enjoy visiting the National Parks, and go with no set agenda and stay until they have seen their fill. Australia, China, India, Africa, and Asia are just a few of the countries these world travelers have explored. 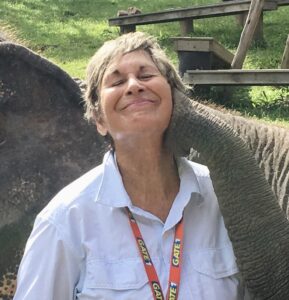 “It’s hard to choose a favorite country, but I would have to say our month in Africa and South Africa is a highlight,” says Cyndee. They especially enjoyed the elephant safaris in Botswana. “It was like a storybook,” recalls Tom.

They generally plan about a third of their trip before they embark, and then check the internet along the way for travel specials and select where to go next. “If in doubt, go further out,” is their motto, laughs Tom.

Some of their best travel advice is to pack light and buy clothes at your destination. Last year, they spent a month in India and bought the most amazing silk sarees and other comfortable traditional clothing that they still wear. They also advocate getting to know the locals for an authentic experience.

In mid-May, when they saw their travel plans halted due to the pandemic, they decided to take a leap of faith and try paddle boarding locally. They arrived at the Coronado Boathouse as newbies, but quickly made friends with the employees, and they now paddle in the bay four days a week.

Tom recalls that the first day they knelt and prayed, and it took several sessions for them to feel comfortable standing up. They often paddle to Stingray Point and under the bridge past the golf course, where they find dozens of errant golf balls. “This has been an immense blessing that we overlooked before,” comments Cyndee. “I have a picture of myself surfing at 19 and now I can say I’ve mastered paddle boarding at age 72.”

Paddle boarding has been especially therapeutic for Cyndee who suffered a stroke just over a year ago while on a fishing trip with Tom in Minnesota. She has since recovered, but credits paddle boarding as a large part of her recovery.

“The constant balancing on the board has helped me both physically and mentally. I love being out on the water in the fresh air,” she says. “We arrive at the Boathouse bright and early, for us that means 10:30 am, and relish the time getting a workout in while seeing stingrays and schools of fish,“ says Tom. They enthusiastically invite others to join them.

Cyndee is relishing this new chapter of her life in Coronado. With a master’s degree in Special Education, she taught 7th through 12th grade for 40 years in the Sweetwater School District. After retiring, she worked as a volunteer at the San Diego Zoo and enjoyed the training and especially loved the Galapagos turtles, koala bears and orangutans. Tom has a diverse past, growing up in North Carolina and having a variety of jobs throughout his life as an engineer, salesman, and most recently retiring as a marriage and family counselor. Both say they appreciate all that Coronado has to offer even more now. After paddle boarding, they enjoy going to lunch at local restaurants, with Tartine being a favorite, and shopping in local stores, like Emerald Surf Shop for wetsuits. Tom enjoys chronicling their travels and writing poems for Cyndee.

Travel is once again on the docket as these two joyful souls plan to travel to Lake Powell in the coming weeks and who knows how long they will be gone. It just depends on what comes up along the way.

“We travel well together and no matter what comes up, we look for the positive and go with the flow,” says Tom. With more places like the Galapagos Islands and New Zealand to discover, they haven’t been everywhere yet, but it’s definitely on their bucket list.