This is the third in a series taking an in-depth look at the Coronado Police Department covering traffic stops, use of force and body cams, mental health calls, as well as programs, statistics, policies and community involvement. With tension mounting on a variety of fronts in the world right now, Chief Chuck Kaye welcomed the opportunity to share details on how the CPD serves and protects the City of Coronado. 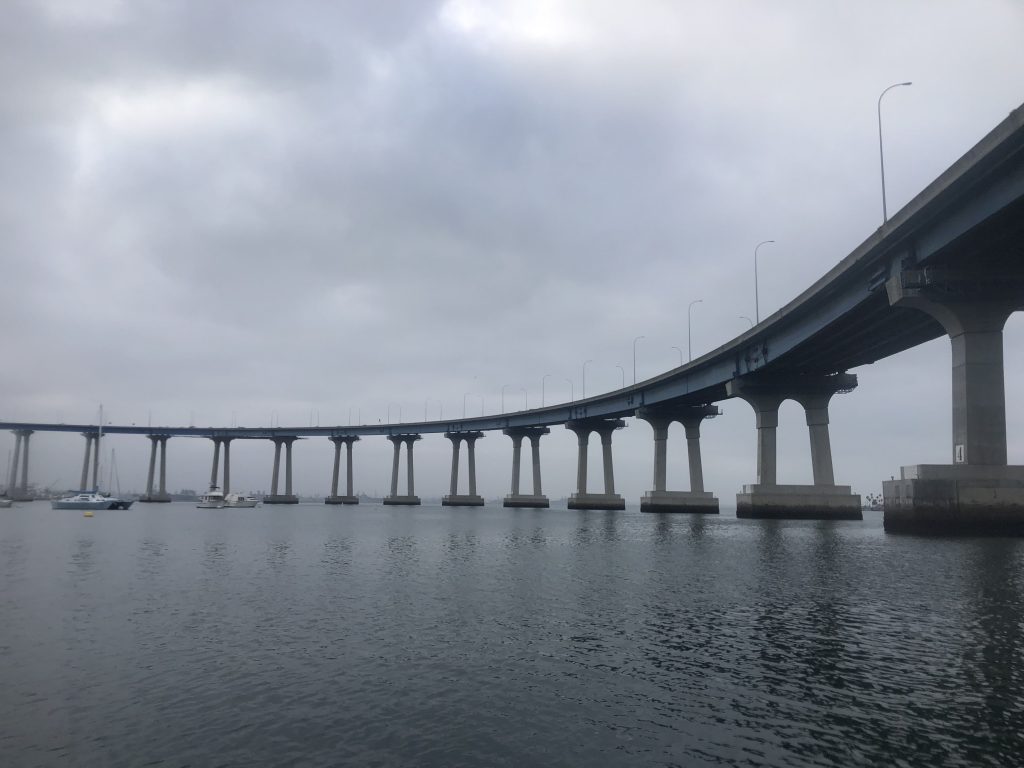 One of the most unfortunate situations that the Coronado Police Department (CPD) deals with on a regular basis is suicide attempts on the San Diego-Coronado Bridge. Since the bridge opened in 1969, more than 400 people have jumped to their deaths. From 2000-2010, the annual number of deaths ranged from three to 12. The number of suicides from the bridge has moved steadily upward averaging about 16 every year since 2014. Fifteen people jumped from the bridge to their deaths in 2019, according to the County Medical Examiner’s Office.

Caltrans installed bird spikes along the bridge railing as a preventative measure in 2019, but that did little to curb the number of jumpers. A plan is in place to install a permanent and more effect solution, the Reverse Folding Wave Barrier, on the 2.1 mile, more than 200-foot-high bridge. Each suicide tragedy involves a host of agencies including the California Highway Patrol (CHP) and both Coronado and San Diego Police officers who respond to calls. The Harbor Police Department is often needed for its patrol boats in the bay. The Emergency Negotiations Team can be called in to assist and help engage the person in a dialogue to prevent them from hurting themselves and bring the situation to a peaceful resolution.

“I’ve been impressed at how the CPD handles attempted suicides and suicides on the bridge,” states Coronado Police Chief Chuck Kaye. CPD has learned that the best practice is to completely shut down the bridge to eliminate distractions, and bring in the Emergency Negotiations Team to try and negotiate a positive outcome. Chief Kaye says that if you see something suspicious on the bridge or elsewhere, it’s best to call 911 so the right people can be sent to access the situation.

When asked how many suicide attempts have been thwarted thanks to police intervention, Chief Kaye says that they haven’t fully tracked those statistics yet, but said, “I can recall two cases in the last few months where individual officers were confronted with a suicidal subject on the bridge. In one case, the officer tackled the person as they ran toward the edge. In the other case, the officer found a person standing on the edge with their arms wrapped around one of the light standards. The officer was able to approach and engage the person and guide them off the ledge. In most cases, a person suffering from suicidal thoughts is reluctant to comply with the officer’s requests to step away or off the ledge. That is when other tools, such as the Emergency Negotiations Team, are utilized to help negotiate.”

Kaye also addressed the recent bridge closures due to the threat of violent protests. With his experience handling Chicano Park protests as a San Diego Police Officer, he felt prepared for the situation. As the protesters headed for the bridge chanting threatening words, CPD and CHP officers closed the bridge for 12 hours beginning on May 31, until things calmed down, and then again the next day for a few hours to avoid an aggressive confrontation.

Nixle alerts are used to notify the community of bridge closures. Residents are encouraged to sign up to receive the notifications via text message to their phone. In addition to bridge and Silver Strand closures, Nixle alerts are sent for other shut downs that are estimated to continue for an extended period of time, air support operations, to assist in locating missing at-risk subjects and suspects at large in the community, and for emergency situations such as imminent or perceived threat to life or property, disaster notifications and evacuation notices. The City Council set the parameters for Nixle to only post the most pertinent information so as to not flood the system and so important items don’t get diluted. The CPD strives to send the notifications in a timely manner.

Many calls that come in to the CPD are mental health related calls. Recent statistics for those are as follows:

In 2019, emergency 911 calls totaled 18,000. CPD officers responded to 111 ‘5150’ calls, which involve the temporary, involuntary psychiatric commitment of individuals who present a danger to themselves or others due to signs of mental illness. Twenty-seven of those calls went to County Mental Health. CPD has a designated shelter bed available if needed for homeless individuals.

Police officers put their lives on the line every day, in a multitude of circumstances, to ensure the safety of the community they serve.

Next in the series: profiles of some CPD Officers and Senior Volunteer Patrol Officers.