The most recent death by suicide on the San-Diego-Coronado Bridge occurred Thursday, April 18th, fewer than three months after the installation of bird spikes intended to deter would-be jumpers. News of the tragedy spread quickly on social media along with sentiments of condolence, concern and ever-growing outcry for a solution.

On Tuesday of that same week, a CalTrans District 11 meeting was held with the topic of bridge safety as the exclusive agenda item. The Coronado Bridge Suicide Deterrent Summit featured a day-long workshop for its stakeholders to consider the efficacy of the bird spikes and explore permanent barrier options.

The bird spikes have been criticized for failing to deter suicides, but the counter argument acknowledges there is no way to determine if any lives were spared or deaths prevented as a result of the spike installation. Coronado Mayor Richard Bailey shared the following statement:

“CalTrans continues to pursue a detailed feasibility study for a permanent suicide deterrent along the Coronado Bridge. In the interim, bird spikes were installed in the hope that they might make someone think twice about jumping and ultimately save lives. Unfortunately, over the past two months, we have observed several suicides since the installation. Although two months does not make a trend, the initial results are discouraging.”

Alongside Mayor Bailey at the meeting was Coronado Assistant City Manager Tom Ritter, as well as San Diego-Coronado Bridge Collaborative for Suicide Prevention leaders, Rhonda Haiston and Wayne Strickland. Attendees were presented with the nine physical barrier alternatives identified in the Caltrans San Diego-Coronado Bridge Physical Suicide Deterrent System Feasibility Study Report and tasked with prioritizing them according to detailed performance criteria. The “Reverse Folding Wave Barrier” was the concept decided upon and will be carried forward as part of the Caltrans’ Project Initiation Document (PID).

“It will take quite a while actually to complete due to permits, funding and construction, but a fence will now be done,” reports Wayne Strickland. “The cost was ‘mid-range’ of all the choices. A net was the most expensive and least effective and had maintenance issues. All choices were considered, and the reverse folding wave barrier was the best choice. We had about 45 in attendance and did all day workshop and discussed why we picked this over other options.”

Although progress is being made in the process to erect a permanent barrier, the CalTrans timeframe for a project of this scale is still forecast to take between 5-10 years.

Between the years 2011 and 2016, the rate of death by suicide averaged 15 per year, which was double the average from the five years prior. The increase of suicides is a worrying trend, and has inspired measures to expedite the process as a matter of urgency.

One such measure is a bill proposed by State Senator Ben Hueso. Senate Bill 656 essentially justifies a fast-track of the process pending the outcome of the feasibility study currently underway. An excerpt from the bill is as follows:

This bill would require the Department of Transportation to act expeditiously toward approving and constructing a permanent physical barrier on the San Diego-Coronado Bridge and would require the department to give this priority over other pending projects not related to the immediate health and safety of the public. 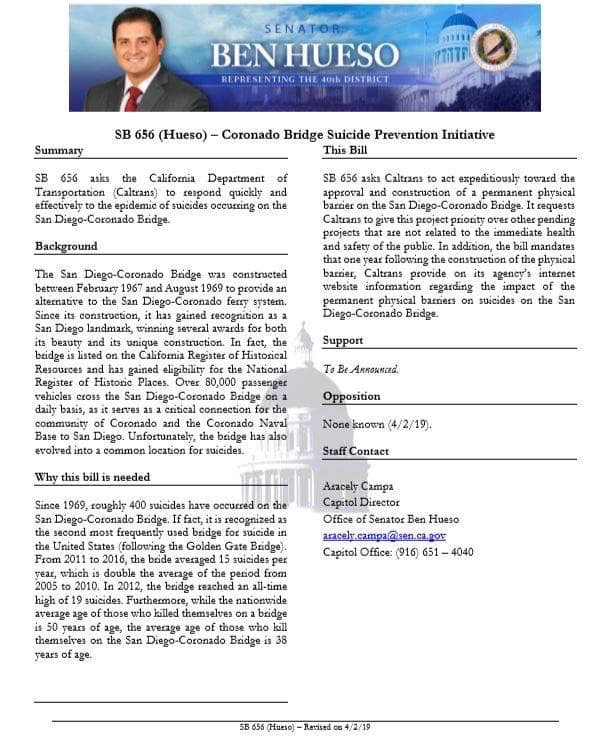 Regardless of timeframes and seemingly endless processes, Coronado’s Mayor Bailey is encouraged by the dedication of all stakeholders involved:

“I am tremendously encouraged and appreciative of the amount of attention Caltrans is devoting to solve this mental health and transportation issue. Nothing ever happens quickly in government; however, I think it is entirely possible a permanent, long term solution, could be identified and prioritized as soon as this year. The local Caltrans leadership team has been a champion for us and the state is finally acknowledging the importance of addressing this issue once and for all.”