After four days of firefighting, all known fires have been extinguished aboard USS Bonhomme Richard (LHD 6).

Our fire teams are investigating every space to verify the absence of fire. Until every space is checked and there are no active fires we will not be able to commence any official investigations.

We did not know the origin of the fire. We do not know the extent of the damage. It is too early to make any predictions or promises of what the future of the ship will be.

We cannot make any conclusions until the investigation is complete.

What we do know is that brave Sailors from commands all across San Diego worked tirelessly alongside Federal Firefighters to get this fire extinguished and I want to thank them for their efforts. This was a Navy team effort. We had support from the air and sea. Three helicopter squadrons conducted more than 1,500 water bucket drops, fighting the fire and cooling the super structure and flight deck enabling fire crews to get onboard to fight the fire. Tugs also provided firefighting support from the waterline, cooling the ship’s hull.

Entering day five, firefighters continue efforts to contain the fire aboard USS Bonhomme Richard on July 16th, while facing new concerns of ship stability. Late Wednesday evening Naval Surface Forces (NSF) announced that, “Out of an abundance of caution the pier and ship were cleared of personnel due to an initial shift in the ship’s list. Personnel are now pier side. We will continue to monitor as the ship settles.” Early in the morning of July 16th firefighters were allowed back on board and NSF provided an update on injuries stating, “As of 06:00 am Pacific time July 16, firefighting teams are on board USS Bonhomme Richard (LHD 6) continuing operations. The total personnel treated for minor injuries remains 63, 40 Sailors and 23 civilians.”

A full investigation will be conducted once the fire has been extinguished and the ship spaces are deemed safe to inspect. Firefighters are assessing damage as they contain the fire.

USS Bonhomme Richard Commanding Officer, CAPT G.S. Thoroman, has worked alongside firefighting planners as they continue to plan firefighting operations. In a letter to all those who have supported the efforts to save the ship and take care of the crew, Thoroman stated, “The overwhelming support we received from all the waterfront commands, Federal Fire Department, Naval Base San Diego, tenant shore commandos and myriad other entities have been nothing short of inspiring… Thank you for all the help and support you have provided.” Later in the letter Thoroman shared his thoughts on his Sailors and said, “The Sailors of USS Bonhomme Richard have demonstrated courage in the face of the fire. Their strength and resilience has been eye-watering.” 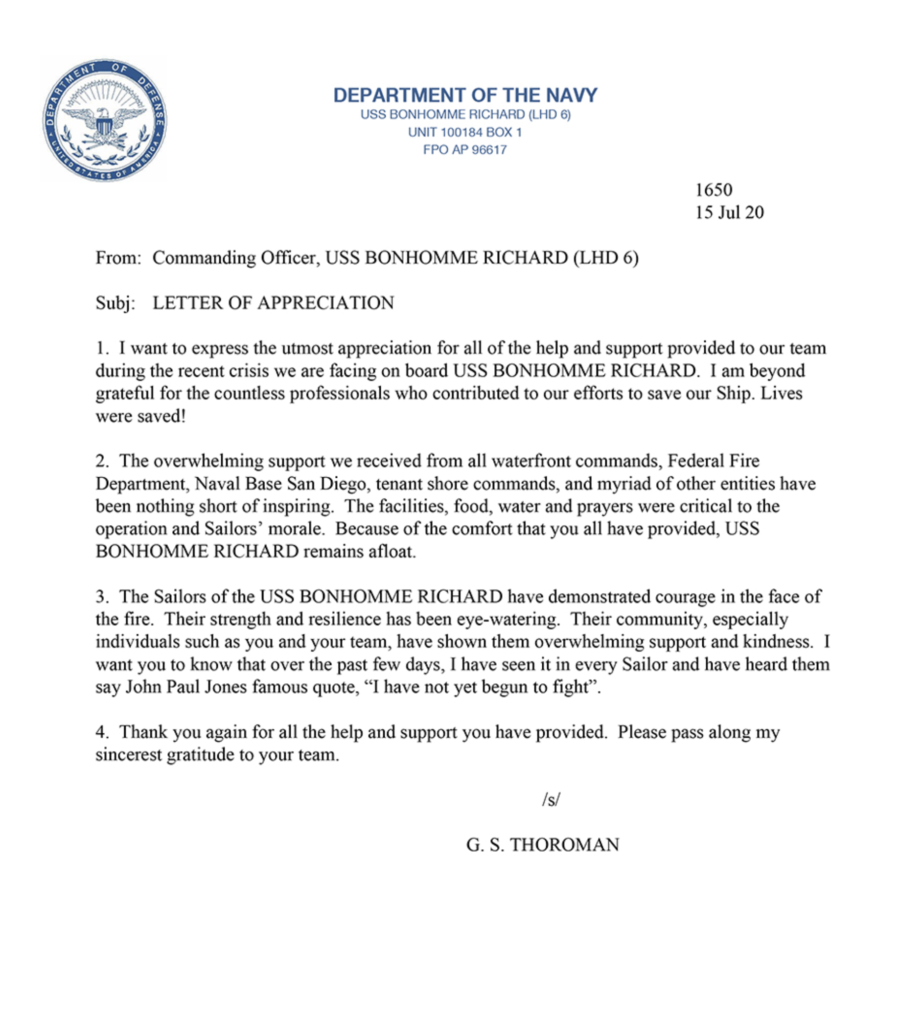 Coronado based helicopter squadron, HSC-3, has been critical to the firefighting efforts during the first four days of firefighting operations. HSC-3 has ceased flight operations at this time and NSF said they will provide more information at a 2 pm press conference this afternoon.

Fighting this fire has been a herculean effort made by a large number of military, federal and civilian entities spanning Southern California. According to NSF, “Fire teams consisting of Federal Fire San Diego and U.S. Navy Sailors have been fighting the fire aboard USS Bonhomme Richard (LHD 6). The fire teams consist of more than 400 Sailors from 12 San Diego-based ships. The ships providing firefighting support include:

Throughout the five days an outpouring of support has been shown for the Sailors and those engaged in the firefight. Despite the devastation caused by the fire, the spirit and dedication of Navy Sailors remains evident. #OneTeamOneFight

Jeannie Groeneveld
Jeannie is a recently retired Naval Officer whose first duty station brought her to Coronado in 1998.  A Navy Helicopter Pilot for 10 years and a Public Affairs Officer for 11 years, the Navy afforded her many incredible opportunities to serve her country in unique ways while seeing the world.Have news to share? Send tips, story ideas or letters to the editor to: [email protected]