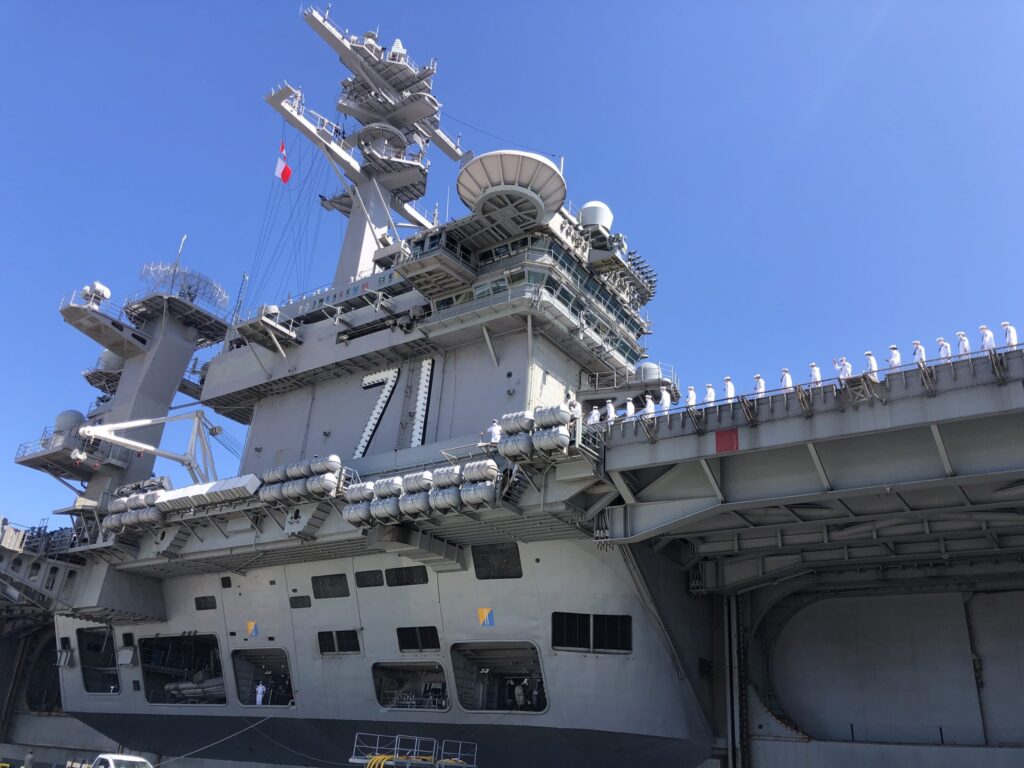 USS Theodore Roosevelt (CVN 71) returned to its homeport at Naval Air Station North Island in Coronado on July 9th, after completing a challenging and successful six month deployment to the Western Pacific. “Today is a great day as we welcome TR [USS Theodore Roosevelt] home,” said Vice Adm. DeWolfe Miller, Commander Naval Air Forces as he waited on the pier to greet the ship’s leadership.

The crew of Roosevelt manned the rails in their dress white uniforms as she pulled into San Diego Bay. Families waited patiently in their cars as their loved ones pulled up to the pier.  As with most events during the COVID pandemic, the homecoming looked very different than the traditional welcoming party at the pier. COVID-19 has caused the Navy to implement safety precautions that include strict mask requirements, distancing guidelines and disembarking procedures. Despite the new procedures and smaller crowds, the excitement and joy among the crew returning to their families could be felt as they debarked the ship.

Roosevelt deployed on Jan. 17, 2020 to conduct what was supposed to be “routine operations in the Indo-Pacific and maintain security and stability in the region.” No one could have predicted how the world would change in the coming weeks and months and how those changes would make the Roosevelt deployment anything but “routine.” It was just five days after the Roosevelt left for deployment that the United States had its’ first case of COVID-19 reported to the CDC.

The initial transit to the Western Pacific allowed for training in advance of Roosevelt’s participation in an exercise in the Philippine Sea. According to Naval Air Force Atlantic Public Affairs, “while deployed to the Indo Pacific region, CVW-11 aircraft and the U.S. Marine Corps participated in the first evolution of Expeditionary Strike Force operations in the Philippine Sea, conducted a multitude of joint, high-end warfighting exercises with USS America (LHA 6), and their expeditionary strike groups.”

Unfortunately, the COVID-19 pandemic that has had a profound impact around the world, causing fear, economic instability and changes to everyday life, also impacted the crew of Roosevelt. In early March, following a port visit to Vietnam, the Theodore Roosevelt crew had an outbreak of COVID-19 and immediately pulled into port in Guam where they moved more than half the crew off the ship to quarantine in various locations on Guam. Rear Admiral Doug Verissimo, the Carrier Strike Group Commander said, “we have a young and resilient crew, whose teamwork and tenacity during these unprecedented challenges made me extremely proud.”

After months in Guam taking care of the crew, sanitizing the ship, conducting training and preparing for a return to sea, Roosevelt sailed out of Guam to return to its mission June 4th. “The crew did an outstanding job and morale has been high as we returned to our mission after leaving Guam,” said CAPT Carlos Sardiello, Roosevelt’s Commanding Officer.

The resilience of the crew of Roosevelt is evident in their ability to return to sea and successfully complete their deployment. According to Naval Air Forces, “Theodore Roosevelt sailed over 31,835 nautical miles, supported dual-carrier operations, expeditionary strike force operations, air defense exercises, and joint-service interoperability exercises.”

The Navy assured families that Roosevelt returns to its homeport free of COVID-19. Every Sailor had two negative COVID tests prior to leaving Guam and the ship has been at sea for 14 days with no positive COVID cases.

Jeannie Groeneveld
Jeannie is a recently retired Naval Officer whose first duty station brought her to Coronado in 1998.  A Navy Helicopter Pilot for 10 years and a Public Affairs Officer for 11 years, the Navy afforded her many incredible opportunities to serve her country in unique ways while seeing the world.Have news to share? Send tips, story ideas or letters to the editor to: manag[email protected]