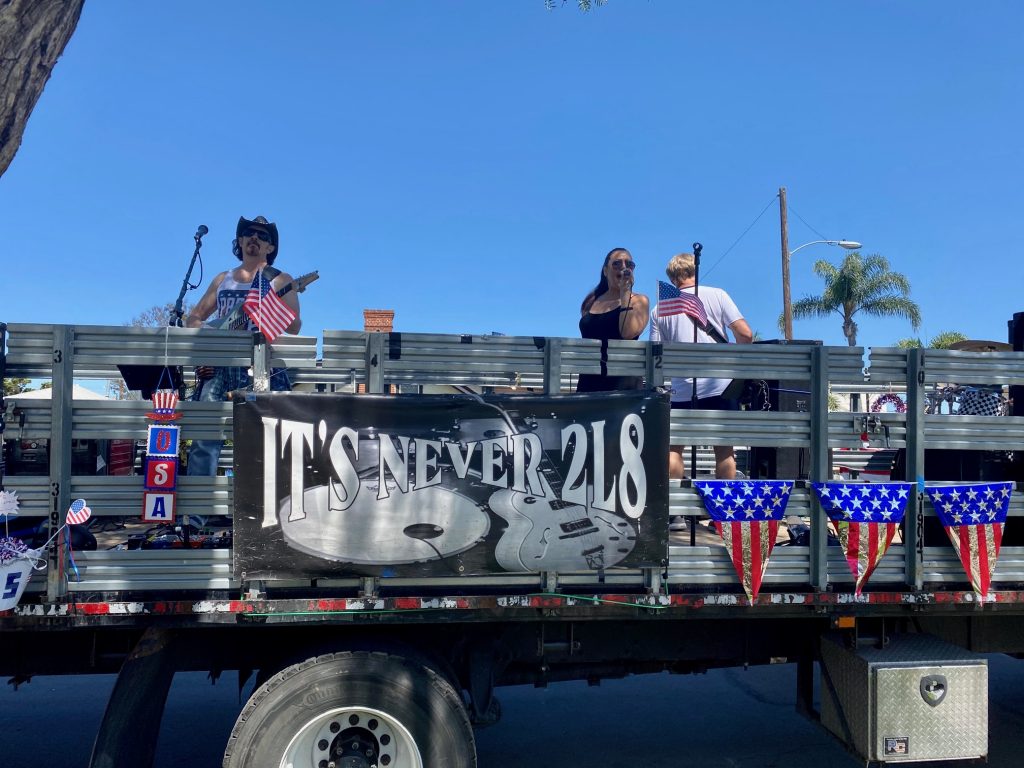 IT’S NEVER 2L8, a Coronado local band, got creative this 4th of July to help Coronado celebrate the busiest day of the year. The band loaded up in an extended truck bed and was ready to kick off the performance at 10AM. A small group of people were littered on the nearby street corners and sidewalk. They took precautions with at least a six foot spacing between others and wearing masks.

The idea of the pop of performance is explained by Chris Nurding, “The genesis of our Rolling Block Party came from the cancellation of the Coronado Independence Day Parade, Concerts, and Fireworks! My family has called Coronado home since 1922, and as a matter of fact, my mother, Jean Greenlee Nurding, rode on a float in the 1952 parade as the first ever Miss Coronado! So obviously, this year was an overwhelming, yet understandable disappointment for all locals! Add to that, the fact that this summer’s 50th anniversary season of the Coronado Concert in the Park series was also canceled, well,  we all felt that we needed to do SOMETHING! IT’S NEVER 2L8 was scheduled to kick off the 50th anniversary season back in late May.” Chris adds, “After putting our collective heads together, it was decided that a surprise rolling block party on 7/4, bringing the music to your front door, would be prudent to help bring a touch of normalcy to Coronado residents this year!”

At the scheduled time, several police vehicles gathered around as well as a fire department car. Officials spoke with Chris and the band as they explained their plan which included only a few songs at each location, the band exiting the truck bed while it was in motion between stops, and reassuring that they would stay off of busy streets like Orange. One officer was heard joking, “there is no concert in the park, but you can have a concert in the street.” 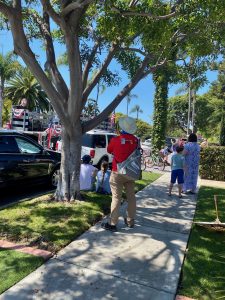 Chris shares, “IT’S NEVER 2L8 was very careful to respect and comply with current health directives, and social-distancing protocol! We did not advertise our intent to do this ‘concert’ so as to mitigate crowds forming along our route, and thus putting a strain on the ability to social distance! We also endeavored to play only 2-3 songs at each stop, and then move on to avoid any crowd formation.”

The band began, “Welcome to Coronado’s Rolling Block Party, the Social Distancing Band of Coronado. Practice social distancing or we will be done after a block or two!” Deanna Haala kicked off the music by singing the national anthem. Onlookers stood tall, many thankful for a traditional beginning to the 4th of July celebrations. After that the band transitioned into Pat Benatar’s “Hit Me With Your Best Shot” followed by Journey’s “Don’t Stop Believin’.” 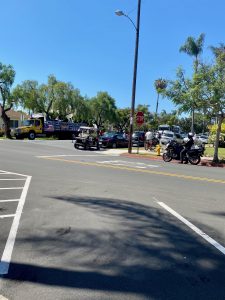 Kelly, a Coronado local, commented, “It was great to still start off the 4th of July with the national anthem and I enjoyed their music choices after.” Terra was dancing along to the music while eyeing the stationary police motorcyclist, “Law enforcement have been doing things you can’t even imagine. The police department is fabulous and it’s nice they can enjoy something so positive like this.” Some passersby pulled over their cars or bikes to watch the band for a song or too, others offered a smile but continued on to their next stop.

Chris admits, “In the end, our only regret was that we couldn’t cover more ground and play for more families, friends, and neighbors celebrating Independence Day in their own front yards! But we certainly appreciate the wonderful feedback we have since received, we would certainly do it all over again if asked, and we all had a great time! IT’S NEVER 2L8 was truly honored to try and bring a little normalcy to Coronado residents, during a time where ‘normal’ is now so desperately missed.”

Lamb's Players Theatre has been closed since March, mid run of the musical Alice. When the show's run was cut short, the cast got...
Read more
Advertisement
Advertise Here (Get Rates)