This article is part of a series that focuses on different viewpoints and race relations in Coronado in the wake of the George Floyd tragedy.

He was on the Homecoming Court. He was a star personality on the school daily bulletin. He played volleyball and basketball. He even made his own CD and music video, performing songs at school pep rallies.

On the surface, things looked pretty good for Jonathan Smith, Coronado High School graduate, class of 2005. But once you dig deeper, the picture isn’t as pretty.

Jonathan says it wasn’t easy being the new kid, especially if you’re black.

“I started Coronado High School as a freshman,” says Jonathan. “I wasn’t really accepted. I’m pretty sure it had something to do with being the new black kid.”

Jonathan lived with his family in Strand military housing. Previously, he had attended Hilltop Middle School in Chula Vista. He describes the transition to Coronado High School as “impactful.”

“Freshman year was extremely hard on me,” says Jonathan. “I remember telling my mother I wanted to go to a different school. I even considered getting in fights so that I would get expelled, just to get out of that place.”

Jonathan–who currently lives in Vancouver, Washington with his wife and young daughter–has mixed feelings when he looks back at his time on the island, and the people who live there. 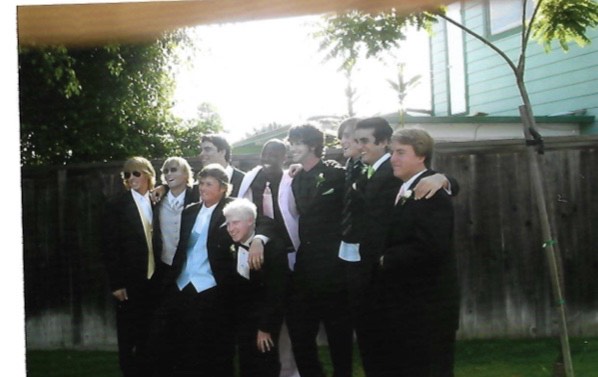 He describes the Coronado community–in general–as being very connected with “its own.”

“Everyone knows everyone, and the majority of families there have been there for years,” says Jonathan. “Being a minority in Coronado is not the best feeling. I always felt like I had to watch my back.”

Jonathan says most of his friends were minorities, and it took him a long time to win acceptance from his white classmates. But it did happen…to some extent.

He says things started to turn around his junior year in high school. In addition to playing sports—volleyball and basketball—he started speaking on the morning daily bulletin, which was broadcast school-wide.

Jonathan even began to enjoy his own brand of fun…and fame.

“A friend and I put out a CD called, ‘Fresh Outta Nado,’ and even made a music video,” said Jonathan. “Students and teachers purchased our music. I performed at many pep rallies.”

Jonathan believes his involvement in school activities really fueled his acceptance, and that other—less active minorities–may suffer a worse fate.

Even so, acceptance had its limitations.

Jonathan recalls a very painful experience on Valentine’s Day. He was dating a girl who was white, and he took her to the movies. Midway through the film, she got a phone call. She took it outside.

“She comes back in bawling her eyes out and distraught,” says Jonathan. “We left immediately. I ask her what happened…eventually she opened up. She tells me her parents were disappointed and mad that she was out on a date with me, because I’m black. (I still am by the way.)”

For Jonathan, it was a rude awakening.

“I was hurt because at the time, I thought people were past that,” he says. “I found out the hard way, that wasn’t the case.”

Jonathan didn’t want to be the cause of any conflict between the girl and her parents, so he sadly ended the relationship.

He says he felt singled out in other ways for the color of his skin. He says he was walking with his other black friends down Orange Avenue when they were stopped by the police. The police told them to line up.

“We got searched in front of Night and Day Café in broad daylight,” says Jonathan. “The officer said they had received a call that someone of our description was waving around a gun. I was so upset and humiliated.”

Another time, Jonathan says he was pulled over while driving a friend’s car on the island. (His friend was in the car.) The officer found marijuana in the car. After insisting it wasn’t his, and even after his friend assumed responsibility for the marijuana, Jonathan was charged with the offense. Later, it was dropped in court.

He was also stopped by police while walking in Coronado late at night with a white female friend. Jonathan says he and his friend were separated. The police isolated his friend, and questioned her for more than twenty minutes. Finally, the police allowed them to leave.

“She told me the police were making sure she wasn’t in danger, and after she continued to say she was fine, they kept questioning her,” says Jonathan. “Keep in mind, I was just told to sit down on the curb and not speak the entire time.”

Another time, his father was stopped by police while driving home on the Strand.

“I remember my father coming home, feeling extremely upset,” says Jonathan. “He was pulled over—my Dad was driving a very nice Mercedes Benz at the time—and an officer approached the car with his hand on his gun in fear of his life.”

Jonathan says his father was irate, and explained to the officer how wrong his actions were. And that if he was that scared, he should choose a different profession.

“I remember having my face smeared across the pavement by multiple police officers from the San Diego Police Department,” says Jonathan. “My face looked horrible.”

When George Floyd lost his life at the hands of a police officer, Jonathan reacted with anger, and empathy for Floyd’s family.

“Because, this type of situation happens way too often,” says Jonathan. “This was a modern-day lynching. He was in complete submission to the officers with his hands cuffed behind his head, and yet still, still, still the officer continues to keep his knee on George Floyd’s neck.”

Jonathan says the murder hits home because–like George Floyd–he, himself has a daughter. A daughter that needs her father.

“I am sad that his daughter will grow up without a father due to racism from the very people that are sworn to protect and serve,” says Jonathan.

“Because of his death, I am able to reach people that I may have never reached,” says Jonathan. “This type of injustice has been going on for centuries in this country. The power of social media allows our message to travel faster.”

When it comes to being a better ally, Jonathan says that being “color blind” is not the answer. He says it’s more powerful and more helpful to recognize the unique experiences of minorities in America, and how it shapes their vision of our country.

“Do not become ‘color blind’ because it is important to recognize the growth of this nation,” says Jonathan. “Do not feel sorry for us. Help us build from what you know we have been through in this country.”

Given the current social and political climate, does Jonathan think that racism can really be curbed?

“I honestly believe we are on the right path,” says Jonathan. “However, I don’t think impactful change will occur until the next generation, or even the one after that.”

As a psychology major graduate at Lewis and Clark College, Jonathan says he understands the power of change, and the lengthy timeline for this type of revolution.

“It requires a complete paradigm shift,” says Jonathan. “Because now, in this very moment, you have a white family in America that thinks that the death of George Floyd was justified. In that same household you have a child that does not agree with the parent. It is that child that will eventually cause the ripple effect and create true change in this nation.”

Jonathan believes that using the power of our collective voices for change–the younger generation leading the way–may send our country in a progressive new direction towards racial equality.

“The entire world is listening,” says Jonathan. “When has that ever happened willingly?

Coronado resident Refugio Rochin has long loved biking around Coronado, but it wasn't until the COVID pandemic that he found himself drawn to the...
Read more
People

The latest Community Hero video from the Coronado Library's Dive into Discovery Summer Reading Series. Thanks to Surf's Up Studios for the video.https://youtu.be/xJDmwnW3HHk
Read more

Mia Skelton is her name. She doesn’t sound Chinese, but she is.Adopted by a white family when she was young, Mia moved to Coronado...
Read more
People

Local Voices: What the Captain of the Coronado High School Football Team Wants You to Know

Meet Edward. He just graduated with the Coronado High School class of 2020. He’s black.Edward is a star athlete--the captain of this year's football...
Read more
People

Local Voices: An Unlikely Hero Sends Love Over the Bridge, and Back Again

It was August of 2017. Hal Sadler was sitting in his parked car, outside Graham Memorial Presbyterian Church. He was nervous, and he was...
Read more
People

According to recent statistics, Coronado is 75% white. So, what’s it like to grow up on the island as a Black American? Just ask...
Read more
People

What does it take to get accepted to Princeton, graduate a tennis star with a 4.65 GPA, and earn the title of Salutatorian? Just...
Read more
Entertainment

Coronado resident Barbara McNally knows a thing or two about determination. In fact, it’s taken her over a decade to write her book, Four...
Read more
Advertisement
Advertise Here (Get Rates)